In case you didn’t know, Corey Seager is a superstar

Editor’s Note: This is a guest-submitted piece by Justin Choi. Follow him on Twitter and read his work on Prospects 365.

That was Corey Seager’s offensive line during the 2020 World Series, giving life to the Dodgers’ astonishing playoff run that culminated in their first championship since 1988. Seager was named MVP, because, well, look at those numbers!

After diving into his regular season performance, though, it’s not so surprising that Seager delivered. He’s been a great hitter ever since his debut, and what he accomplished in 2020 elevated him to a new status: undoubtedly elite. The flame might have dwindled across a full season, but everyone else had the same number of opportunities to hit, too. And in the available span, Seager looked like a superstar.

So, how did Seager improve? The most notable change is in his average exit velocity. At 88.8 MPH in 2019, it was above the league average, but nowhere near the marks of consensus top hitters. Then something clicked the following year, and his exit velocity shot up by an amount that almost seems impossible: 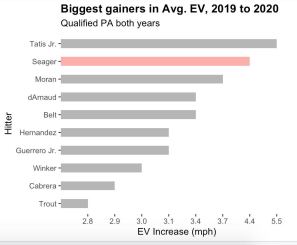 In terms of sheer increase, Seager’s is second to Padres phenom Fernando Tatis Jr. But maybe this isn’t too shocking. After all, his 2019 was seen as a period of recovery from an unexpected Tommy John surgery the season prior –– it’s natural that his production would bounce back in 2020. So let’s change gears. Seager’s last full season before his injury was in 2017. Based on that, I searched for hitters who recorded 200 or more PA in both 2017 and 2020, then looked at the change in their average EVs between those years. An increase would indicate that a player was both consistent and evolving: 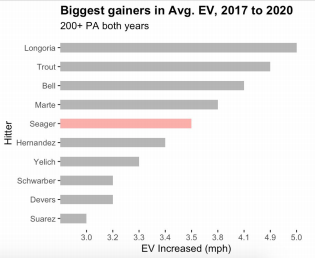 Using this window, Seager is still up there. He’s in the Top 10. He and Michael Nelson Trout are the only two hitters to occupy the Top 10s of both graphs. It’s one thing to improve from one year to the next, and another, more impressive thing to improve over the span of a few years while undergoing a season-ending surgery. You could say that this design is flawed because it ignores fluctuations. But there are always fluctuations, and what matters is the overall trend. From both a wider lens and a narrower lens, Seager is getting better.

It’s not as if he’s mindlessly swatting at baseballs –– Baseball Savant’s ‘Barrels’ require both optimal exit velocity AND launch angle, and Seager’s Barrel rate was at a career-high 15.8% in 2020. Almost all hitters reached the 100 MPH EV mark in 2020. But very few of them repeated it with consistent loft.

What truly separates Seager from others, however, is his ability to make contact. Here’s a plot that shows the HardHit% (rate of balls batted 95+ MPH) and Z-Contact% (rate of contact on pitches in the zone) of hitters in 2020 with at least 200 PA. The dotted blue lines represent the hitters’ average for each metric. Seager is the point in orange: 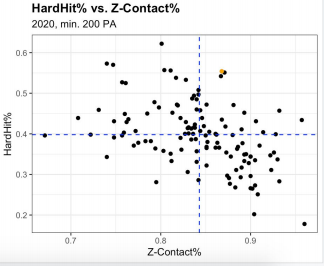 There’s a moderate trade-off between power and contact. Seager defies it. When he swings at a strike, he makes contact. And when contact is made, he destroys the ball, launching it at 95+ MPH 55.4% of the time in 2020 –– a two-step formula for success. There are almost no hitters who accomplish both tasks on the same level, save for two other points near him.

Who are those other points? One is Mike Trout (again!), and the other isn’t, because he’s Freddie Freeman. There was a fleeting, but real temptation to title this article as “Corey Seager is as good as Mike Trout and Freeman.” I didn’t succumb, thank goodness. Trout is Earth’s best hitter, and Freeman was the National League’s best hitter –– Seager’s not quite there. Still, it’s amazing to see his name appear alongside them in a display of metrics that aren’t cherry-picked, but instead extremely relevant to a hitter’s production.

Yet, there’s a unique aspect to Seager’s profile that neither Trout nor Freeman possesses. If you’re a regular viewer of Dodger baseball, you’ll know that he loves to swing at the first pitch. By the numbers, his 113 first-pitch hacks ranked 3rd-most amongst all hitters in 2020. But unlike others, say Luis Robert, Seager’s aggression was selective in the best way possible. When the first pitch was a would-be strike, he swung 71.2% of the time. When it was a would-be ball? He held back, dropping his swing rate all the way down to 22.4%. This happened across all counts, but the 0-0 count is where it’s most pronounced –– the difference between Seager’s Z-Swing% and O-Swing% on the first pitch was the 2nd highest in baseball, behind only George Springer. Seager knows when to attack, which makes him successful.

Corey Seager is a unicorn. He’s an aggressive free-swinger who consistently makes contact, and contact that matters in terms of exit velocity and launch angle. How many players can you say that about? Sure, he’s going to whiff at an above-average rate, and he’s not going to walk as much as teammates Max Muncy or Cody Bellinger, but that’s just his approach, and it provides more than enough offensive value. There’s always the question of whether he can stay healthy. But this is about what Seager has achieved, not what he hasn’t or won’t in the future. And so far, indeed he’s achieved.

Dustin Nosler began writing about the Dodgers in July 2009 at his blog, Feelin' Kinda Blue. He co-hosted a weekly podcast with Jared Massey called Dugout Blues. He was a contributor/editor at The Hardball Times and True Blue LA. He graduated from California State University, Sacramento, with his bachelor’s degree in journalism and a minor in digital media. While at CSUS, he worked for the student-run newspaper The State Hornet for three years, culminating with a 1-year term as editor-in-chief. He resides in Stockton, Calif.
@DustinNosler
Previous Looking at the 31 non-roster players the Dodgers invited to Spring Training
Next [Game Recap] Mets 3, Dodgers 0: Noah Syndergaard dominates Trevor Bauer in surprise February showdown