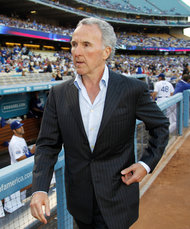 The Dodgers' owner, Frank McCourt, has agreed to sell the team after fighting for two years to hold onto it.

Now, after an ugly divorce, an angry battle with Major League Baseball and a decision to put the Dodgers into bankruptcy, McCourt on Tuesday night agreed during a meeting in his lawyers’ offices in Manhattan to sell the Dodgers in a process that will be supervised by a federal bankruptcy court judge.

“This is a swell day for Los Angeles,” Steve Lopez, a columnist for The Los Angeles Times, wrote Wednesday. “I don’t know who will step up and buy this team, but whoever it is can’t do worse. You could grab anyone off the street and get better results.”

The names of potential suitors are now surfacing for the tarnished marquee franchise. They include Mark Cuban, the owner of the Dallas Mavericks, who tried to buy the Texas Rangers last year; Dennis Gilbert, a former player agent who was an early bidder for the Rangers; Ron Burkle, a billionaire supermarket mogul; and Alan Casden, a real estate investor who lost the bidding in 2003 to McCourt. Even former Dodgers like Orel Hershiser and Steve Garvey have voiced interest in stakes.

Robert Boland, a professor of sports business at New York University’s Tisch Center, said the bidding for the team, Dodger Stadium and other assets should start at $1 billion, which would exceed the Major League Baseball record of $845 million paid for the Chicago Cubs.

“This is one of the sports properties anyone looking to buy a team would want,” Boland said.

Robert Wuhl, the actor and sports talk-show host, said his discontent with the Dodgers grew after his season-ticket costs doubled following a fourth-place finish in 2010.

“I didn’t re-up,” he said. “I didn’t go to one Dodgers game this season. I missed it. But I wasn’t going to give him another dime.”

Wuhl added, “I think the people of L.A. are very happy now.” McCourt bought the team from Rupert Murdoch’s Fox Entertainment Group, which had acquired it from the O’Malley family, the team’s owner for 47 years.

McCourt took the team on a strange odyssey and challenged the loyalty of its fans.

He brought a small baseball pedigree with him; his grandfather owned a piece of the Boston Braves. McCourt’s Dodgers had decent on-field success. They played in the postseason four times, twice losing in the league division series and twice in the National League Championship Series. They finished fourth in the N.L. West in 2010 and third this past season, under the rookie manager Don Mattingly, with a record of 82-79.

But McCourt turned out to be a troublesome owner who incurred the wrath of Commissioner Bud Selig, who invoked the “best interests of baseball” in trying to get him to sell. McCourt bought the team entirely with debt, some of it financed by Fox. He added still more debt as the years passed.

Last April, as enmity rose between McCourt and baseball. Rob Manfred, an M.L.B. executive vice president, said: “There is no owner who, during the period 2004 to 2011, that we’ve spent more time with on his business problems, his business issues and his desire to be treated differently under applicable rules, than Frank McCourt.”

If McCourt’s financial problems worried M.L.B. — the Dodgers have said that Selig approved how McCourt structured the team’s debt — then his divorce proved to be an embarrassment. Testimony revealed tales of the McCourts’ spending on a lavish lifestyle. Not only that, McCourt fired his wife as the team’s co-chief executive soon after she filed for divorce, citing insubordination and other charges.

Baseball asserts that McCourt siphoned $189 million from the team over seven years.

But McCourt’s troubles could extend beyond baseball. Federal investigators in Los Angeles have been interviewing Dodger employees and have subpoenaed financial records from both the team and Major League Baseball as part of an inquiry into McCourt’s financial dealings, according to two people with knowledge of the inquiry.

What exactly the authorities are seeking to determine is unclear. But during the McCourts’ divorce case it emerged that the couple  had not  paid taxes for a number of years.

The hostilities between McCourt and baseball appear to be mainly over thanks to mediation.

The agreement reached to sell the team, under the bankruptcy court’s supervision, must still be approved by Judge Kevin Gross. If he agrees, the team will be put up for sale According to three people briefed on the agreement, McCourt might hold on to one of his assets, the Dodger Stadium parking lot.

McCourt will hang around until a new owner emerges. But his eventual departure was greeted by the blog Mike Scioscia’s Tragic Illness with these words:

“Rejoice! Our Dodger Spring has come.”

A version of this article appears in print on November 3, 2011, on page B17 of the New York edition with the headline: Agreement to Sell Team Lifts Hopes for Dodgers.

Get Free E-mail Alerts on These Topics

TicketNetwork is a resale marketplace and is not a box office or venue.