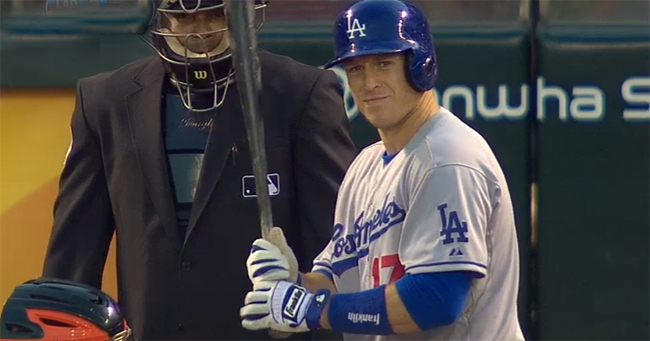 Ladies and gentlemen, your 2014 Los Angeles Dodgers catchers, also known as “oh please oh please oh please A.J. Ellis stay healthy,” because… there’s not a lot of depth here behind him, is there? (In addition to these five, Griff Erickson and Chris O’Brien will be in camp just because the Dodgers have 32 pitchers and they need someone to catch them. This is not meant to make you feel better.)

Ellis is coming off a bit of a downer year, because while he maintained his power by popping another 10 homers, his OBP dropped by 55 points, thanks to a walk rate that dropped three percent and a BABIP that fell 60 points. On defense, reviews of his ability to frame pitchers were rarely kind. Both ZiPS and Steamer forecast slight rebounds in OBP, but it doesn’t seem like anyone thinks he’s going to get back to the heights that made him the hero of 2012.

Still, he doesn’t need to be what he was in 2012 to be a valuable piece, and the constant rave reviews about his role in the clubhouse and to prepare the pitching staff count in some of the ways that don’t show up on the stat sheet. That’s partially why despite the down year, we never heard a peep about any particularly serious effort to upgrade at the position, which makes sense. If he is merely a somewhat above-average catcher, which isn’t really unreasonable to expect, Ellis is a valuable member of this team,  no matter what Kirk Gibson says.

But really, he has to stay healthy, and he reportedly lost weight this winter in an attempt to do so. You can live with Federowicz as a backup, because he’s got a solid enough defensive reputation that getting him in there once or twice a week is fine, but it’s a real problem if he’s forced to play every day. In parts of three seasons — which to be fair, is still only 193 plate appearances — his line sits at .227/.283/.341. That’s poor, the projection systems don’t really see him improving much, and he’s shown little indication in the minors that there’s much more offense to come. (No one start pointing to his Triple-A numbers, because for the umpteenth time, .348/.416/.592 at home, .255/.338/.390 on the road.)

Beyond that… well, avert your eyes. Take small children out of the room. Butera is arguably the worst hitter in recent history, while at least Olivo can go deep every now and then, on the extremely rare occasion that his bat touches the ball. Boscan is a minor league lifer, with 30 big league plate appearances in a pro career that started back in 1997.

The only intrigue is this: Butera is out of options, which means that he’d have to pass through waivers if and when the Dodgers attempt to send him to Triple-A. (Federowicz has an option remaining, but I’m not ready to delve into those conspiracy theories just yet.)

The good news is that FanGraphs has the Dodger catchers as the 10th best group in baseball, but that comes with an appropriately enormous grain of salt. That projection in based on 3.5 WAR, which I imagine we’d all take, but WAR is not meant to be used down to tenths of a point, and the span of teams that look to be between 3 and 4 WAR include 15 clubs, or half the sport. That’s a pretty big error bar, but it does keep the Dodgers comfortably in the middle of the pack at the position. It does all depend on Ellis, however. If anything happens to him, this could get pretty ugly.

Next up: First base

Mike writes about lots of baseball in lots of places, and right now that place is MLB.com.
@mike_petriello
Previous So, So Many Dodger Pitchers In Camp
Next Kasten: Mystery Player Headed To Dodgers Camp