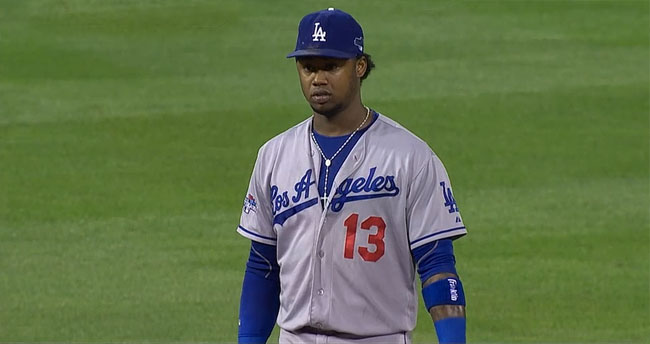 Now it’s time for the shortstop preview, or “Hanley Ramirez and a bunch of guys who aren’t.” If anything has been clear so far in our spring training preview series, it’s that the Dodgers are dangerously thin in the infield. Shortstop is no different. The options past Hanley aren’t very appealing, though a recent signing has made things a bit more interesting. Given Hanley’s inconsistent health last season, this is a scary place to be in.

Ramirez was amazing last year while healthy. His 191 wRC+ would have been second in the majors (just behind Miguel Cabrera‘s 192) if he had enough plate appearances. When his incredible offense was combined with surprisingly adequate defense, Hanley was worth 5.1 fWAR in the 86 games in which he actually played. This was enough to match Juan Uribe for the most valuable position player on the Dodgers, and it was Hanley’s most valuable season since 2009.

In Chad’s post previewing a potential extension for Hanley, he noted an increase in BABIP which would normally be a cause for concern going forward. However, his batted ball profile changed to support the BABIP as well as his increased HR/FB ratio. Both will probably decrease, but not as much as one would expect without the extra context. It might be surprising, then, to see Hanley’s 2014 offense projections. They’re still good, but not anywhere close to last season’s elite level. Chad outlined the reasoning behind the projections in his post, and it’s very easy to see Hanley beating them if he stays healthy. There’s no way for the projections to “know” about exterior factors, such as Hanley continuing to recover from shoulder surgery after the 2011 season.

Ramirez managed just 86 games last season. If there’s any consolation to fans after looking at the table above, it’s that several of the injuries weren’t caused by issues that are likely to recur. He missed 24 games due to a thumb injury that occurred while diving for a ball in the World Baseball Classic and 9 games due to a shoulder injury caused by falling into the stands at Wrigley Field. Even if those injuries aren’t counted against his ability to stay healthy, his hamstring and back nerve issues could pop up again in the future.

As a result, the backup to Hanley might be the most important “reserve” position on the Dodgers. However, once we look past him, the organization is pretty thin at the position. The backup shortstop is one of the few areas of spring training intrigue that the Dodgers have this season, so the competition will be interesting if nothing else.

Erisbel Arruebarruena is probably the most interesting name of the potential reserves. Though his Cuban league stats were decent, scouts aren’t convinced. Reviews of his swing and plate approach are middling to poor. In the linked article, scouts speculate that he might not top a .300 OBP in America, which is discouraging. Luckily for Arruebarruena, shortstop is where a player can produce the most value defensively. An average defensive shortstop is worth +.75 wins per 162 games, and Arruebarruena has the potential to be much better than that. After the Dodgers signed him earlier this week, Ben Badler of Baseball America called him “one of the premier defenders on the planet”. Seriously, look at some of these plays (I’m particularly fond of the plays at 1:03 and 1:20):

Hopefully, he’ll end up more like Andrelton Simmons than Brendan Ryan (who is a useful major league player, but shouldn’t be a starter for a contender). In our post on Arruebarruena’s signing, Dustin notes that Arruebarruena is likely to start the season in Chattanooga. Since he needs to play every day and isn’t ready for the major leagues, the Dodgers will need to find help among the more familiar and less interesting names.

If Arruebarruena’s profile sounds familiar, it’s because the Dodgers already have a similar internal option. Miguel Rojas‘ name has been thrown around by Ned Colletti as a potential fill-in at second base if Alex Guerrero isn’t ready. Rojas is really a shortstop, and he also has the reputation of being an elite defender. We’ve heard scouts conjecture that Arruebarruena can’t hit in America, but we know that Rojas can’t. Given the other options, I can’t really see Rojas making the major league roster. He might not make it to Albuquerque, either. On the plus side, the middle infield of the Lookouts (and of the Dodgers during certain spring training games) should be really fun to watch.

The two players most likely to make the major league roster as a backup shortstop are Justin Turner and Dee Gordon. Mike already talked about them in his second base preview. Turner has only played 188-2/3 innings at shortstop in his career, so it’s impossible to judge his performance with defensive metrics. He can’t really be any worse than Gordon, though, and Turner is also better with the bat.

It’s possible that both players will make the opening day roster. If the Dodgers carry twelve pitchers, eight starting position players, two extra outfielders (one of whom is Scott Van Slyke, who can back up first), and a back-up catcher, that leaves two spaces for reserve infielders. They don’t necessarily need two reserves who can play short. They might feel compelled to keep Chone Figgins around, for example. If the Dodgers are forced to pick between Gordon and Turner, they’ll probably pick Turner. We don’t know if Turner has an opt-out in his contract, but we do know that Dee has options remaining. Since Dee is still learning positions other than shortstop, it’s probably best that he practices them a bit more at the minor league level.

Long-time Dodger farmhand Justin Sellers will likely continue to be Albuquerque’s primary shortstop in 2014. His hitting line in the minors was surprisingly decent last season, but it was mostly due to a comically large home/road split: .305/.377/.558 in Albuquerque, .238/.278/.314 on the road. Isn’t Albuquerque the best?

Brendan Harris was invited to the major league camp, but he doesn’t figure to make the majors unless something terrible happens. Last season was the first time he made it onto a major league roster since 2010, and he was awful. He hasn’t posted a wRC+ above 80 since 2008, and his -10.8 UZR/150 at short doesn’t help.

I just spent way too many words describing a potential MVP candidate and a bunch of replacement-level (or worse) back-up players. Hanley’s health will be critical if the Dodgers want to contend next season, and that’s probably the last thing that we want to hear.

Next up: Third base

Daniel Brim grew up in the Los Angeles area but doesn't live there anymore. He still watches the Dodgers and writes about them sometimes.
@danielbrim
Previous The Time To Extend Hanley Ramirez Is Now
Next The Paul DePodesta Era, Ten Years Later