SNLA Launches Tuesday, And You Probably Won’t Get It Yet

First, the good news: SNLA does in fact launch tomorrow at 7 p.m. Pacific Time. We’ll get to the assorted negatives in a minute, but it’s important not to gloss over that simple yet massive fact. After years of being a small portion of Prime Ticket, the Dodgers have their own 24/7 channel, and if you remember the endless legal battles of Frank McCourt — aimed almost entirely at retaining control of the franchise long enough to reap the benefits of being able to do something exactly like this — then you remember how far away this day seemed not all that long ago.

We first learned about this idea just over a year ago, and ever since then we’ve been excited to see it in action. If not for the prospective billions reaped in from television, this team maybe doesn’t have Yasiel Puig. Or Hyun-jin Ryu. Or Zack Greinke. Or Adrian Gonzalez. Or a long-term deal in place for Clayton Kershaw. And so on. 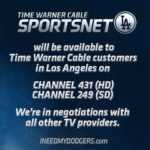 So while we have no idea yet how programs like Backstage: Dodgers or Timeless Dodgers or Dodgermentary and all the rest will look, the point is that something fans of most teams — Yankees and Mets excepted — can only really dream of. That’s a great thing for fans, and just imagine if this launch was happening tomorrow with McCourt’s s*ht-eating grin proudly announcing it. No. This is better.

But of course, a television network is only fun if you can watch it, and at the moment, many of you can’t. This shouldn’t be a surprise, but to many it is. In Los Angeles on Time Warner, you can get it on channel 239 (standard definition) or 431 (HD), and, as announced today, you can also pick it up in Bakersfield on Bright House on channels 21/107 (SD) and 1107 (HD). The Bright House release also noted that SNLA will be added to “Orlando, Tampa, Birmingham and Indianapolis service areas in March, and in its Detroit service area in April,” which is a motley collection of cities if I’ve ever heard one. That was the southern division of the XFL, right?

That means, for the moment, that if you have DirecTV, or AT&T U-Verse, or Charter or Cox or Verizon or whatever other cable provider, you don’t have SNLA yet and aren’t likely to for the launch barring some unexpected announcement tomorrow. (Whether or not other local Time Warner installations around the country will have it, I do not know.) I cannot reiterate this enough: while surely disappointing, this is in no way a surprise. Carriage fights are a fact of life in this business. When and if you don’t get SNLA the moment it launches, it’s not because DirectTV hates you. It’s not because SNLA hates you. (It might be because Comcast hates you, but then, you need a soul to hate, don’t you?) It’s because these are big-money deals, and they never ever get resolved until the last second, or sometimes after.

That doesn’t mean that this is absolutely going to stretch into the regular season, though it might, and for some unlucky people, it may very well do so. We saw that happen with the Lakers, of course, and the Padres, and the Astros still aren’t on local TV for much of Houston. I can’t see that happening for Southern California’s biggest cable companies, but it happens, and it’s an unfortunate fact of life.

But really, annoying as it may seem, launch date isn’t the deadline. As far as I know, zero other teams broadcast 100 percent of their games — the Yankees, for example, have 26 of 32 scheduled, and the Mets are doing 14 on SNY — and it makes us look so, so bad when we complain about missing the first few. I want to see the channel too, and I don’t know if I will be able to tomorrow, on my not-LA Time Warner. At least we’ll be able to see the games on MLB.tv, which does not have a blackout policy in place for the spring, and is not affected by all this.

I’m looking forward to what this channel has to offer, and so should you. I’m also not going to be very surprised when so many of us aren’t able to actually watch it on day one. That’s because expectations should be placed properly. Anyone without Time Warner who thought for sure, 100 percent, no questions asked, that they were seeing the channel at launch either hasn’t been paying attention or is just fooling themselves. The channel will come, and hopefully soon. These companies just don’t feel the pressure until actual real content is being missed — you no doubt remember the CBS/Time Warner summer blackout that ended mostly because the NFL season was about to start — and spring training games don’t count for that.

We’ll get the channel, we just might need to wait. Now if real, actual season games are being played and people can’t see them without doing some shady business to their internet connections to avoid the MLB.tv blackout? Then I’ll be right there with you. For now, patience. Good things are coming.