Seth Rosin Makes An Impression On Day One 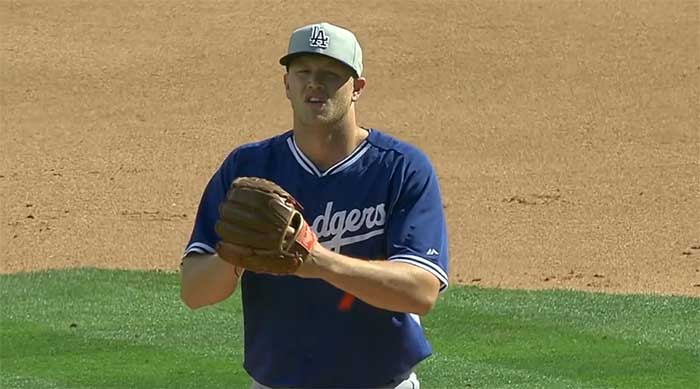 I’m not really going to “recap” a spring game. I could bother with the four seconds it would take me to verify that it was actually a 4-1 Arizona win, which I think was true, but I honestly don’t care. They keep team records, but it’s just meaningless, because spring isn’t about wins and losses. It’s about individual players tuning up for the season, or in some cases, proving they deserve a job.

That being said, it’s Feb. 26, so obviously don’t dwell too hard on the fact that Clayton Kershaw looked less than stellar — five hits and a walk in two innings, as three runs scored, partially helped by a Carl Crawford goof in left field. Kershaw wasn’t particularly great last spring either, and this is barely more than an scrimmage, though he did get hit hard, then actually went down to the bullpen following his appearance to get more work in. It doesn’t matter. Seriously. If his next three outings look like this, then we’ll talk. Until then, he’s more than earned the benefit of the doubt.

But really, the biggest takeaway from today’s game was this: Get to know the name Seth Rosin (pictured above), who impressed greatly by striking out five in two scoreless innings, including Paul Goldschmidt, Aaron Hill, and Martin Prado consecutively in the fifth. Now, let’s be fair: If we can’t get too bummed about a lousy Kershaw start, then we also can’t get too excited about one spring appearance from Rosin, lest I refer you to Brim’s post from a few days ago about spring stats.

Still, as a Rule 5 pick, Rosin has more to fight for than most, and it’s not like he tore through some nondescript minor leaguers there. I still have absolutely no idea how he’s going to find a home in what is already an overstuffed bullpen, but I do know that I’m already pre-sad that he’s probably going to be lost because Brandon League and Chris Perez exist.

Or, since it’s only Feb. 26, we might be just ready to ship him off ourselves after he gets blown up four times in the next three weeks. Either way, if you believe in first impressions, Rosin made a wonderful one today.

Mike writes about lots of baseball in lots of places, and right now that place is MLB.com.
@mike_petriello
Previous A case for Clayton Kershaw and Zack Greinke skipping the Dodgers’ Australia trip
Next The Recent History of Dodgers Spring Pitching