This winter, I did a study on pitchers recovering from thoracic outlet syndrome surgery, the same surgery that Josh Beckett had last year. The results were not pretty and were cause for pessimism about his potential contributions this season. As a result, it has been surprising to hear nothing but optimism about Beckett so far during spring training. Or, at least it was, until we saw his first game.

Beckett, who had a small bone removed between his right shoulder and neck to relieve nerve irritation known as thoracic outlet syndrome, said he continues to worry that the numbness he had been experiencing in his fingers before the surgery will return. It hasn’t so far. In fact, he feels the surgery has allowed him to throw from a higher arm angle, getting more downward thrust on his pitches.

We’ve heard things like that from several sources over the past few weeks, so let’s look into it. Because I’m a nerd, the first thing I did was check the data from Brooks: 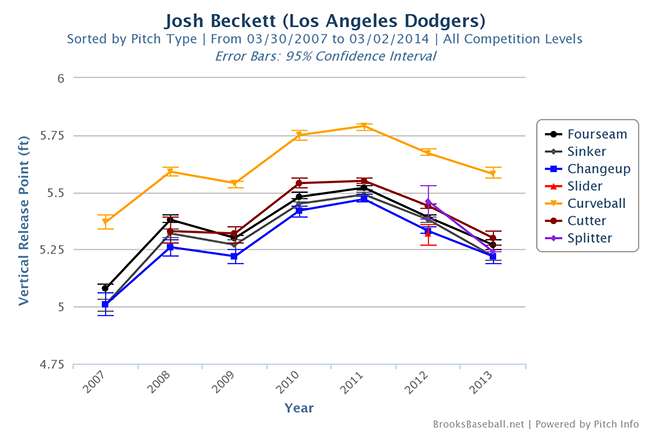 Given the quotes and the Brooks charts, can we see any visible changes between Beckett in the past and Beckett last season? The below GIF shows two Beckett deliveries at 1/4 speed. The left was on May 7th, 2013 (the game before his last that season). The right is from June 9th, 2011. I chose these games because Yankee Stadium and Dodger Stadium have similar center field cameras and Beckett was very good in 2011. Both pitches are fastballs with the bases empty to left-handed batters.

There are a few visible differences between the deliveries. Beckett’s glove is higher in the Dodger GIF, both when set and when he breaks his hands. His leg kick is a bit higher on the Red Sox GIF. The overall pacing of the deliveries is almost identical. However, contrary to the data from Brooks, the release points don’t look very different. What happens if we pause at the release point and bring the two images closer together? 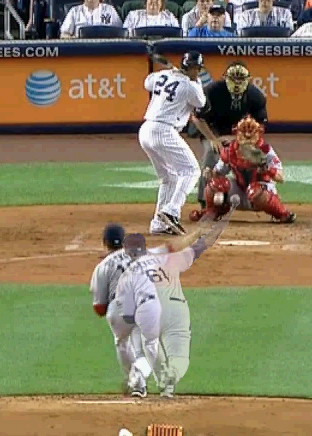 Even on the image to the left, the release points look very similar. However, there appears to be a pretty significant difference in posture between the 2011 image and the 2013 image. Beckett’s head is lower and his body is slightly turned, to a magnitude beyond what would be caused by the different center field camera angles.

The difference in release points can be explained a few ways. First of all, the difference between Beckett’s average fastball release point in June 2011 and May 2013 is only 3.5 inches. Sometimes it’s easy to forget the relative scale on Brooks figures. There was also a tad more variance in Beckett’s release point before the injury, though not as much as I would have expected.

So, between 2011 and 2013 there is a visible difference in Beckett’s mechanics that might have had an impact on his performance. Now that Beckett has pitched this spring, has anything changed back?

During his start on Sunday, Beckett’s results were great. Orel Hershiser made the following observation during the broadcast:

The number one thing that I’m noticing with Josh is how comfortable he is with his mechanics. His arm slot is a lot higher. He used to miss arm side high and kind of drop his elbow and come underneath the ball. Now he’s getting through the ball and driving it downhill.

That matches up with what Saxon reported 11 days before the start. To get a better look, I’ve added Beckett’s first spring start into the delivery comparison GIF:

If anything, Beckett’s set and glove pat are higher than they were last season. His leg kick looks nearly identical to the 2013 delivery as well. 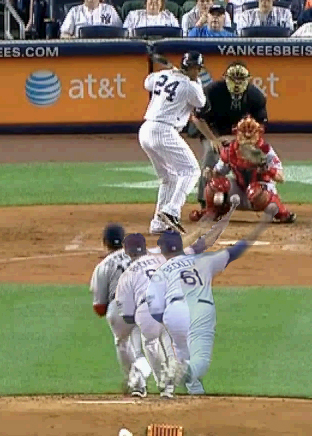 When I added Sunday’s start to the release point overlay, the first thing I noticed is that the release point appears to be lower, contrary to what we’ve heard. There’s a few things that can explain this. First is that the center field camera at Camelback Ranch is quite different than Dodger and Yankee stadiums. Additionally, in the Red Sox delivery the ball has left Beckett’s hand, while it’s still in Beckett’s hand in the spring training image. The stills are probably about quarter of a frame (.01 seconds) apart. 0.1 seconds at 90 miles per hour is over a foot of travel, so that kind of delay makes a pretty big difference.

Even if the release point appears lower, Beckett does appear to be more upright and his body is turned slightly less. His head is slightly higher, and his arm seems further extended from his body. The camera angle might be helping to exaggerate these impacts, but they do appear to be present.

One flaw in this kind of study is that it doesn’t look at repeatability. But, from these small glimpses into Beckett’s mechanics, I’m encouraged. If Beckett continues to pitch as well as he did in his first spring training start, and he continues to not feel discomfort, he’ll slot into the rotation at the conclusion of spring training and potentially be a nice boost to the pitching staff.

Today’s spring training game doesn’t have any surprises in the line-up, but last year’s first-round draft pick Chris Anderson will be traveling with the team and there’s a good chance that he’ll be used in the later innings. Yasiel Puig is also back in the line-up after leaving yesterday’s game with an inflamed back.

Daniel Brim grew up in the Los Angeles area but doesn't live there anymore. He still watches the Dodgers and writes about them sometimes.
@danielbrim
Previous Projected 2017 Dodgers’ pitching staff
Next Hanley Ramirez Did An Unreasonable Thing to Martin Perez