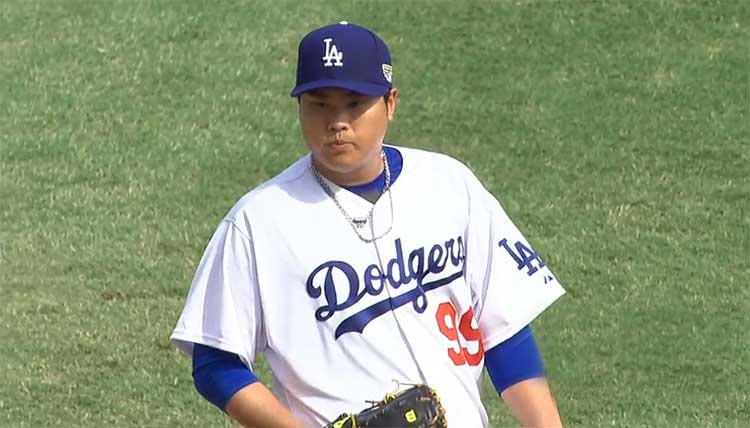 I am quite unsure how that could have gone better. If there’s one thing that would have been more annoying than flying approximately 200 million miles to Australia during spring training — for the players, that is, because I’ve quite enjoyed seeing baseball at the famed Sydney Cricket Grounds — it would have been flying approximately 200 million miles only to come home knowing that you’re starting your season 0-2, down two games to your biggest competitors in the division.

So… good luck with all that, Arizona.

After a solid Clayton Kershaw start in the first game of the abbreviated two-game set, Hyun-Jin Ryu followed with five shutout innings, allowing just a walk and two singles. Including Kershaw’s start, the two Dodger starters combined for 11.2 innings, giving up just one run while striking out 12 against two walks and seven hits… and Zack Greinke wasn’t even part of it. You know what? I think that’s going to work.

Out of the pen, things were great, until things got derpy. Chris Withrow and Paco Rodriguez combined to throw 1.2 scoreless innings, reminding us all how perturbed we’ll be when they’re inevitably sent to Triple-A when the team has to set their regular Opening Day roster. Jamey Wright struggled a bit, allowing four runners on and one to score, but J.P. Howell picked him up, then Jose Dominguez struggled too, because what would a baseball game trying to sell itself to a new audience be without a four hour running time? Paul Maholm came in, mercifully, to get an out, but only just one, because Don Mattingly insisted on going out to get Kenley Jansen to shut the door… only to see Jansen immediately give up a homer to Mark Trumbo, cutting the lead to two, but Jansen rebounded to strike out Gerardo Parra.

(Sadly, no appearance from Seth Rosin. Imagine if he’d made his debut here, then got Rule 5’d back to Philadelphia and never made it back, thus making his only MLB appearance ever coming on the other side of the world? Just a hypothetical, of course; Alexander Guerrero actually did get his first plate appearance, striking out against Addison Reed as a pinch-hitter in the ninth. I imagine we’ll see him again.)

But to merely focus on outstanding pitching — other than the eight walks, of course — would be to neglect an offense that put up seven runs against Arizona starter Trevor Cahill and several relievers who were not Arizona starter Trevor Cahill. Three Dodgers had three hits apiece, combining for nine of the club’s 13 hits, and I’m not sure I’m being facetious when I say that Dee Gordon, Yasiel Puig, and Juan Uribe just might be the most unlikely trio in the world to comprise that group. Each of the three had a double and two singles — Hanley Ramirez and Andre Ethier also reached three times, it should be noted, combining hits and walks — and Puig reached base a fourth time, on a hit by pitch.

Gordon actually got on five times, believe it or not, thanks to a hit by pitch, and also thanks to not a little bit of help from Arizona catcher Miguel Montero (thanks, Chad!):

All this, by the way, despite the Dodgers doing their best to give runs back to the Diamondbacks with silly mistakes. Puig was thrown out twice on the bases, Adrian Gonzalez let a ball get past him at first (though it was scored a hit,) Gordon booted what looked to be an easily catchable ball, and then, well, this happened:

But then, that Montero gaffe was just one of Arizona’s three errors, and the Diamondbacks didn’t have seven runs and a pitching staff that did not allow seven runs to divert attention to.

The Dodgers fly back to California after the game, and are expected to arrive back home at around 3 p.m. Pacific on Sunday, with three days off before facing the Angels in the first game of the Freeway Series on Thursday. No matter what happens there, they’re still 2-0 in games that count. It’s a pretty nice way to spend a 17-hour flight, I would imagine.

Mike writes about lots of baseball in lots of places, and right now that place is MLB.com.
@mike_petriello
Previous Ryu gets the nod in Game 2, along with Gordon and Baxter
Next A.J. Ellis on Framing, Batting Order, and ‘Between Two Palm Trees’