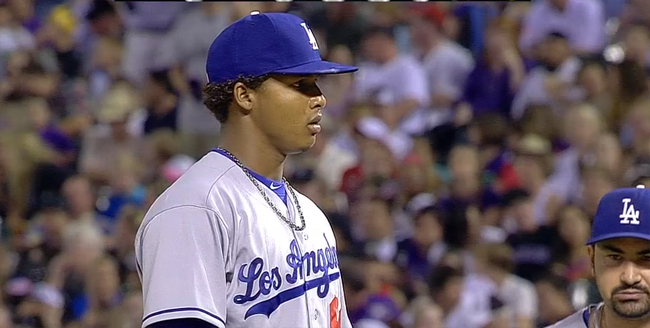 As you no doubt heard already, Carl Crawford has been re-added to the active roster following the birth of his son over the weekend, and Alex Guerrero has been sent to Triple-A Albuquerque. Absolutely none of that is a surprise — we’ve expected Guerrero to be in the minors for some time — and it’s been reflected on the depth chart.

But what you may also notice on the depth chart is that number all the way to the right, showing “28” on the major league roster. That’s fine for now, and it’s fine for this week’s three-game Freeway Series set of exhibition games against the Angels — in addition to the 28, Guerrero, Tim Federowicz, Darnell Sweeney, Trayvon Robinson, J.C. Boscan, and Miguel Olivo will be available, because you can never have too many catchers — but by Sunday at noon Pacific, that 28 has to turn into 25. That’s when the Opening Day roster is due, and it’s also when the “exempt list” for the Australia series disappears, meaning that something must be done with Dan Haren, Zack Greinke, and Brandon League.

So the team has about four days from right now to figure out what they’re doing to get to 25.

1) The first move seems pretty easy — send down Jose Dominguez in order to make room for Greinke (or Haren; it’s not really a one-for-one move in the traditional sense, so it doesn’t really matter “which”). Dominguez impressed with his big fastball this spring, but he missed so much time last year to injury, and looked so wild in Australia, that sending a 23-year-old with fewer than 300 professional innings pitched to the minors is a pretty simple call.

2) The second move also seems easy, if not at all welcome: send down Chris Withrow for the other half of Greinke/Haren. No, I don’t like this. No, you don’t like this either. But even assuming that Paul Maholm starts the season as the “fifth starter” with Josh Beckett on the disabled list, the team still will have more relievers than it knows what to do with, and remember that a true fifth starter won’t be needed for the first three weeks, meaning Maholm could work out of the pen. Remember, the first 25-man roster of the year is hardly set in concrete, and Withrow will see plenty of time in Los Angeles. There are worse things in the world than having to worry about calling up a talented reliever later, than now.

3) Here’s where this really gets complicated. The simplest move, which I don’t believe anyone — including the team — wants to do is simply to activate League and offer Rule 5 pick Seth Rosin back to the Phillies. And who knows, maybe that’s what happens. Or maybe the Dodgers work out a deal with the Phillies to keep Rosin’s rights. (We still haven’t seen where DFA’d Javy Guerra is going to land, remember.) But what’s making this a little more iffy is the status of Hyun-jin Ryu, who injured his toenail during his start in Australia.

Ryu is tentatively scheduled to pitch on Friday against the Angels, then on Wednesday in San Diego in the third game of the domestic season. If he can’t go, then either Haren or Maholm would start that game, but more importantly, Ryu would potentially be on the disabled list and open up a spot. If so, that would leave room for both League and Rosin, and problem solved, if only briefly. Of course, if Ryu’s toe is determined to be serious enough to push him back a day or two but not so major that that it gets him on the DL, then nothing is solved here.

But wait! It gets even more complicated. Don Mattingly indicated yesterday that Matt Kemp could be activated as soon as he’s eligible on April 4, a week from Friday, which would be the home opener against San Francisco. I think we know enough about Kemp at this point not to worry about him being available until he is actually physically in the batters box of a game that counts, and often not even when that has happened, but if so it would require yet another move.

This team isn’t likely to drop to 11 pitchers any time soon, and so that means a batter would need to go. I imagine that’s most likely trip out of town for Mike Baxter, who would then be the sixth outfielder — and seventh if you count Chone Figgins. And then, at some point in the next few weeks, Beckett will likely be activated from the disabled list. Of course, who know what’s happened by then. 17 other pitchers could have been injured first.

Mike writes about lots of baseball in lots of places, and right now that place is MLB.com.
@mike_petriello
Previous A.J. Ellis on Framing, Batting Order, and ‘Between Two Palm Trees’
Next Javy Guerra And Seth Rosin Head Off Into The Sunset