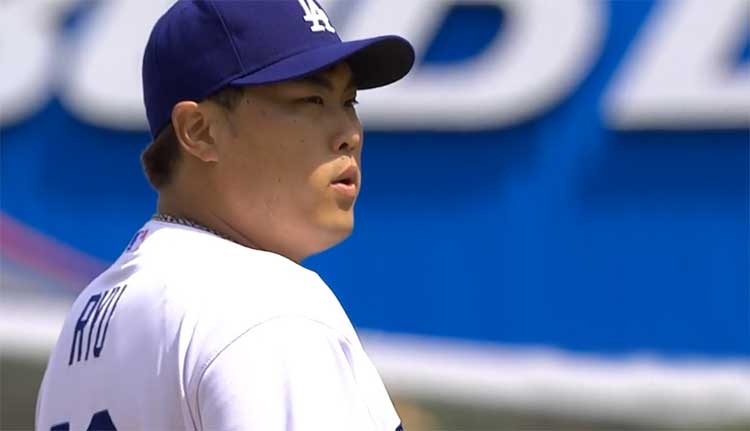 There’s no way around this, really. After a stellar first two starts, Hyun-jin Ryu was atrocious today, giving up six runs in the first and two more in the second before finally stepping aside. He walked three. He gave up eight hits. At no point did he look like the Ryu who had been so good in San Diego and Australia.

Of course, he didn’t get a lot of help, either. Matt Kemp fumbled the first ball hit to him, and while it didn’t turn an out into a hit, it did allow runners to advance. (He also failed to bring in a long drive in the second, though it was scored a hit.) With two outs and a 3-0 deficit, Dee Gordon lost an easy pop up in the sun, which fell between Adrian Gonzalez and Andre Ethier. (This is how the box score reads “Brandon Hicks doubled to first.” Hanley Ramirez made a poor throw on Buster Posey‘s second inning grounder, giving away an out and helping to set up more damage. Ryu wasn’t good, but his teammates made it look a lot worse.

Slowly, very slowly, the offense tried to work back. Gonzalez and Ethier hit back-to-back homers in the fourth, then Matt Kemp doubled in Carl Crawford in the fifth. After Hanley Ramirez singled Kemp to third, chasing Ryan Vogelsong, Ethier drove in Kemp against David Huff, cutting the lead to four. Juan Uribe smashed a ball down the third base line, looking for all the world like at least one run would score, but Pablo Sandoval made a nice play to snare it.

But that was it, sadly, because after Ryu, the story of the day was missed opportunities. Both homers were solo jobs, and despite the fact that the Dodgers had 10 hits and four walks, they could manage to cash in just four of those baserunners.

Silver lining No. 1: the bullpen was great! Jose Dominguez, Brandon League (!), and Chris Withrow each threw two innings of solid ball, and when combined with Jamey Wright‘s ninth inning, the Giants did not get a hit after the second inning. Think on that for a minute; in a game where the Giants scored eight runs, they actually went hitless for seven innings.

Silver lining No. 2: Kemp is still in one piece! Playing all nine innings after Yasiel Puig‘s benching, he doubled, walked, and scared the hell out of all of us when it looked like he went into the wall hard, though it turned out to be nothing. On the double, at least, his trademark extension looked to be there. If you can take nothing away from this game other than some small solace from Kemp, it’s well worth it.

Puig did not appear in the game after his benching. It’s probably all his fault anyway.