Here’s How A.J. Ellis Got Injured

When we learned yesterday that A.J. Ellis had injured his left knee, requiring surgery today, the question was inevitably: How? Ellis played a full game on Saturday, and taking a seat on Sunday didn’t seem out of the ordinary, since he’d played every inning of the season to that point.

Now, Ellis was involved in a close play at the plate on Saturday, getting called out (and remaining that way after a replay challenge), but there was very little contact made with catcher Buster Posey: 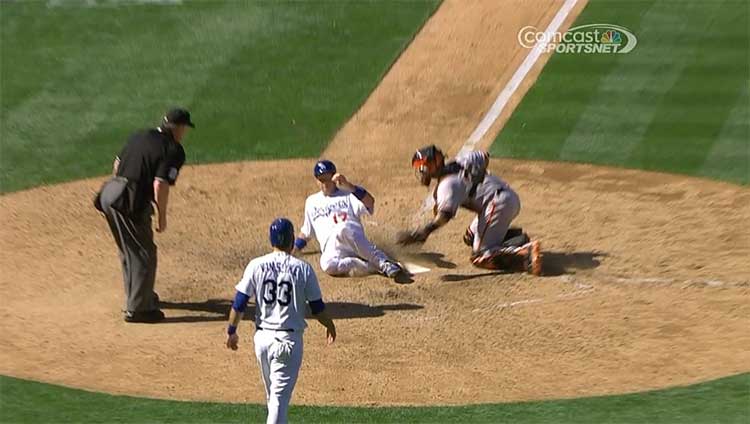 Well, know we know, thanks to Dylan Hernandez: Ellis did hurt his knee on that play. Just not on that part of the play. Ellis had been on second, with Scott Van Slyke ahead of him at third and Dee Gordon behind at first, when pinch-hitter Andre Ethier singled to right. Van Slyke scored easily, and Hunter Pence‘ strong throw to the plate nailed Ellis.

But according to Hernandez, the injury came “when he planted his left leg rounding third base.” And unfortunately, neither of the two broadcasts managed to show Ellis rounding third base. So, we can’t see exactly how this happened. But — and sure, maybe I’m looking too hard to see something that isn’t there — does it not look like Ellis limps away from the plate a bit?

Either way, Ellis is expected to be out for four to six weeks at the least, and that puts this team down their starting catcher until well into May, and perhaps June. (As multiple people have joked, that both he and Clayton Kershaw are sidelined may give them more time to do another Between Two Palm Trees.) This is, of course, bad, and while Ellis hasn’t officially been put on the disabled list yet, you can bet that he will be shortly and that Tim Federowicz will be in town for tonight’s game against Detroit.

Again, this is why Drew Butera was kept over Federowicz. It’s not because Butera is a better player, but because the difference between the two isn’t so much that it was worth thinning out depth for, since Butera was out of options. I’d rather have had Federowicz too, but the difference would have given the Dodgers precisely no more wins. And if Butera was gone and something had happened — say, your starting catcher injuring his knee — then you’re looking at Miguel Olivo, or J.C. Boscan, or something else equally unappealing. (You can argue for either of them over Butera, by the way. It still won’t matter.)

And no, there isn’t likely to be a trade. The number of teams with more catching than they know what to do with is about, well, zero. Even if there were, the number of teams willing to give up a starting catcher on April 8 would be less than zero. On the free agent market, the names are Chris Gimenez, Ramon Hernandez, Kelly Shoppach, and Yorvit Torrealba. Maybe one of them will pop up to add Triple-A depth now that Federowicz won’t be there. Maybe not. But the point is, the team has to get by with what they have until Ellis returns.

It’s not a great day. But at least there’s baseball tonight to take our minds off of it, and with the ridiculous amount of early days off, that hasn’t been as much of a given as you’d think it would be.

Mike writes about lots of baseball in lots of places, and right now that place is MLB.com.
@mike_petriello
Previous A.J. Ellis to have surgery on left knee for meniscus tear, what now?
Next Tigers @ Dodgers April 8, 2014: Interleague Play Already?