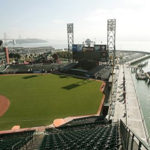 The Dodgers are looking to salvage this series — much like the last series against the Giants — in the final game of a 3-game set. They turn to Hyun-jin Ryu to be the “stopper.”

Normally, I’d feel pretty confident (even going up against Madison Bumgarner), but for whatever reason, Ryu struggles against San Francisco.

In six career outings — including the disastrous April 4 home opener when he gave up six runs on eight hits in two innings — Ryu has been less than stellar against the Giants:

If you take out his numbers against the Giants, Ryu looks like an even better pitcher than he already is against the rest of baseball:

The only thing that hasn’t done (knock on wood) is give up a lot of homers to the Giants. Ryu’s biggest problem has been the walks. In fact, 22.8 percent of the walks he’s issued in his career have come against the Giants. The Giants’ plate discipline won’t be confused for the Red Sox or A’s anytime soon, which makes the higher-than-optimal walk rate against SF rather surprising.

If there’s any silver lining, it’s that Ryu has fared better in San Francisco against the Giants than he has in Los Angeles.

The Dodgers have struggled against the Giants so far (1-4), and a win on Thursday would do a lot to stop the bleeding. I’ve said it on the podcast, but I think the Dodgers and Giants will be fighting for the majority of the season for first place, with the Dodgers ultimately pulling away in August or September. But, as is always the case, the Giants will be a tough draw for the Dodgers.

Yet another story detailing Yasiel Puig‘s journey from Cuba to the United States was published. ESPN has it this time with some additional details than the article that came out on Sunday in Los Angeles Magazine.

“Sometime after 1 in the morning, the knock came. Two men dressed in burglar back stood silently at the door. Somehow, there were no guards that night. (Yunior) Despaigne is at a loss to say why. Regardless, Tomasito had chosen an inopportune moment to relax his grip on his captives. Following the two men in black, Despaigne, Puig, his girlfriend and the padrino crept out of the hotel and down a few dark streets and into a marina and onto a waiting boat that ferried them across the water to Cancun. No violence, no Tomasito, no Leo, no guards. The heist had worked. But the Rubio group had also just ripped off a criminal gang whose highly lucrative underworld ventures required the sanction of Los Zetas. They had now motivated some darkly uncompromising individuals. In plotting the heist, they hadn’t really even discussed the dangers; they were just that obvious. But so too were the rewards, and they’d come to an unstated consensus: For a chance to get Yasiel Puig, they were willing to risk their lives.”

So, the next time you run into someone who’s badmouthing Puig for “not playing the game the right (white) way,” show them these articles. It might be a waste of time because there are just some folks with tiny brains and a complete unwillingness to open their minds to the other side.

Hanley Ramirez is out today after taking a fastball off his hand/wrist last night. X-rays were negative, which is encouraging. Ramirez says he plans to play tomorrow, which is nice, as though we all haven’t heard that one before. But the Dodgers can really ill-afford to lose Ramirez for an extended period of time. Justin Turner gets the nod in his place.

Dustin Nosler began writing about the Dodgers in July 2009 at his blog, Feelin' Kinda Blue. He co-hosted a weekly podcast with Jared Massey called Dugout Blues. He was a contributor/editor at The Hardball Times and True Blue LA. He graduated from California State University, Sacramento, with his bachelor’s degree in journalism and a minor in digital media. While at CSUS, he worked for the student-run newspaper The State Hornet for three years, culminating with a 1-year term as editor-in-chief. He resides in Stockton, Calif.
@DustinNosler
Previous Giants 2, Dodgers 1: Life Is Pain
Next Yasiel Puig Just Had The Most Yasiel Puig Inning Ever