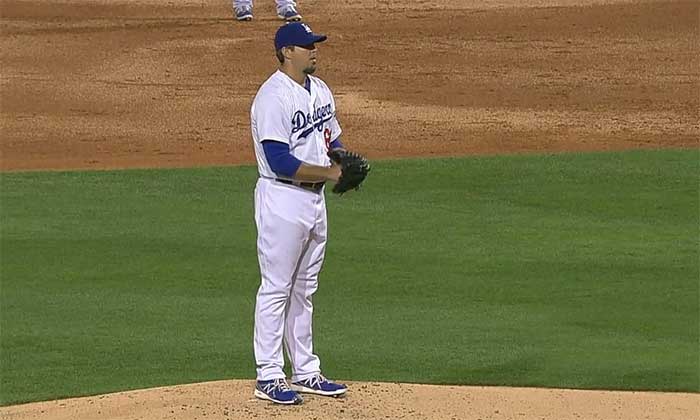 Josh Beckett takes the hill for the Dodgers today, and while he threw five scoreless innings against the Giants in his last outing, the Dodgers will be looking for a more efficient performance this time around. The five walks he surrendered in his last outing ran his pitch count high and also put him at danger for the big inning, though he was fortunate enough to escape trouble. Most importantly, we should all be rooting for him not to struggle so that we don’t die of old age watching this game. Against the D-Backs, Beckett has a career 3.90 ERA in nine starts and 57.2 innings.

Beckett’s opponent will be Josh Collmenter, who moves between relief and starting duties for the D-Backs. Collmenter has a career 4.08 ERA as a starter and a 2.49 ERA as a reliever, so while he’s solid in the rotation, the D-Backs would probably prefer if he was allowed to stay in the pen. Collmenter has a 5.06 ERA against the Dodgers in 32 innings for his career, including giving up a run in an inning of relief against the Dodgers down in Australia.

Apparently it’s still too early for a timetable, so all we can do is hope for no major news, because major news would likely mean a setback of some sort.

In unfortunate minor league news, the Dodgers released Angelo Songco, who some of you may remember was once a decently promising prospect.

Songco broke out in 2011, putting up a .313/.367/.581/.948 line with 29 homers in high-A during his age 22 season. Songco was a bit older and lacked the impact tools to be a regular, but a continuation of his performance at AA could have continued his ascent in the system, so I was looking forward to his 2012 season against advanced pitching. However, he unfortunately needed a rod inserted into his leg in 2012 and never could get his stroke back.