Brian Wilson and Pitching Inside 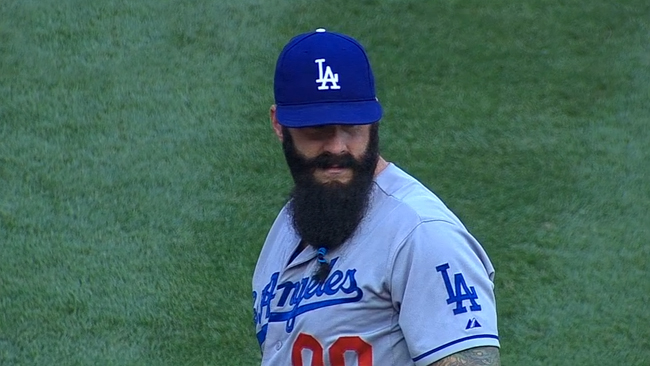 On Saturday, Brian Wilson had a very frustrating outing. He faced five batters, walked one, struck out one, and allowed two hits. He allowed one run (and allowed an inherited runner to score), but Kenley Jansen was able to close out the game in the ninth and sealed the Dodger victory. It took Wilson 23 pitches to finish the inning, and just 11 of them were strikes.

It seemed like he was constantly doing this, and batters wouldn’t bite:

As Mike said during the recap: “[Wilson] refused to throw inside. Ever.” I had the same thoughts as the inning started to unravel. As you can see, Wilson has been targeting (and missing) the outside corner against right-handed batters a lot so far this year, and not throwing inside very often: 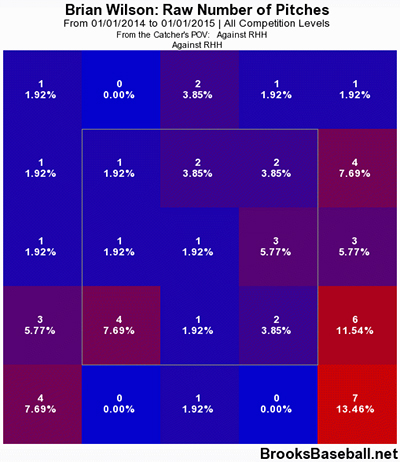 The above chart shows where every Brian Wilson pitch to a right-handed hitter in 2014 (minus the Australia games) has been located. There are definitely more pitches outside than inside. 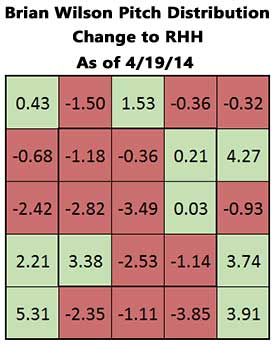 The percentage of pitches inside and off the plate has actually increased a bit. Wilson just doesn’t throw inside to right-handed batters in general. The inner 1/5 of the plot (off the inside part of the plate) has a net increase of 4.84% this season. If that area is expanded to include the next column (inner-most 2/5), there is a net increase of 0.38%. The distribution has changed slightly, but the intent hasn’t.

More discouraging is that the total percentage of pitches inside the strike zone against right-handed hitters has decreased by 7.8%. There’s a big increase in green off the outside portion of the plate (+10.67% in the outer fifth of the plot). At least that much of the perception is true. He is missing the outside corner more against right-handed hitters than he has in the past (he’s “nibbling”).

Wilson throws pitches that break in both directions to right-handed batters, so that doesn’t immediately solve why he likes to live outside. He does the same thing against left-handed batters too: 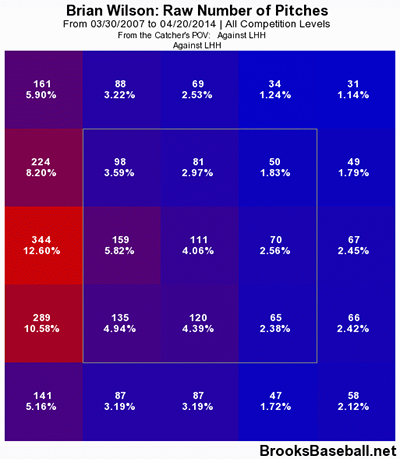 Really, the best person to ask about Wilson’s aversion throwing inside is probably Wilson himself. If anything, Saturday’s outing revealed a piece of Wilson’s tendencies, even if he wasn’t quite hitting his spots. His control seems a bit off ever since he came back from injury, even if his velocity is back to where we would expect it to be.

The plot in pitch distribution change should be taken with a grain of salt. The sample of this year’s Pitch FX data is still really small (three appearances), so things will change as the season progresses. It’s meant to be descriptive of the past, not predictive of the future. But, at least when we see Wilson target the outside corner in the future we’ll know that it isn’t something new. Maybe he’ll throw knuckleballs inside.

Daniel Brim grew up in the Los Angeles area but doesn't live there anymore. He still watches the Dodgers and writes about them sometimes.
@danielbrim
Previous Dodgers 4, D’Backs 1: Puig and Some Other Stuff
Next Phillies @ Dodgers April 21, 2014: Welcome Back, Dominguez