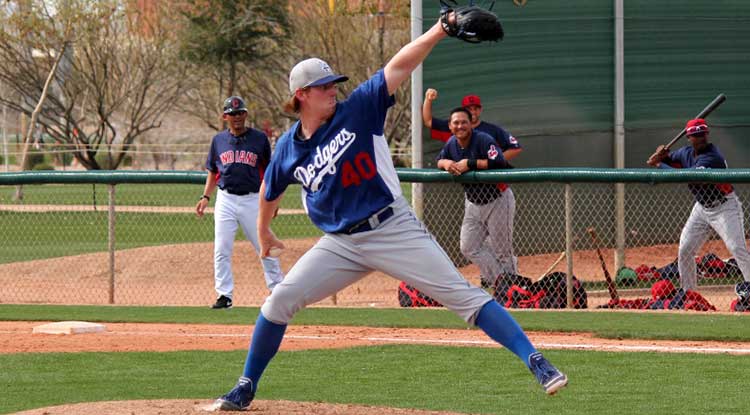 Red Patterson makes his major league debut for the Dodgers tonight against the Twins, as the 26-year-old looks to help the team make it a clean sweep in gloomy Minnesota. Patterson was just recently added to the 40-man roster as Nick Buss was designated, and he is also being used as the 26th player, an exception to the normal roster rules that exists for doubleheaders.

Patterson is a bit of an unknown quantity to most because he was never a top prospect, but he kept pushing forward, and his solid performances at every level led to continued promotions. But perhaps the most surprising part about his MLB debut is that he’s getting called up to start.

A lot of my surprise about his role comes from his stuff, which I feel plays better in the pen, but also because he initially thrived in relief in the higher levels of the minors. In 2012 at age 25, he was promoted to AA as a reliever and had a solid year with a 3.07 ERA and 9.1 K/9. Patterson was then promoted to AAA in 2013 as a reliever, but was moved to the starting role halfway through the season. Patterson didn’t falter, putting up basically the same numbers he did in relief the previous year, with a 3.03 ERA and 9.2 K/9. This year he has started four games, has a 4.15 ERA, and has struggled to miss bats. Fortunately, he has flashed improved command, which was likely the deciding factor in his addition over the struggling Matt Magill and Stephen Fife.

But what can we expect to see from him on the mound, right? Right.

From what I saw of him last year and in Spring Training this year, Patterson will go after hitters with a four-seam fastball, two-seamer, slider, and change. Patterson’s four-seam fastball ranges between 90-91 with some late life, and his 86-88 mph two-seam will run a bit, which helps explain his solid groundball rate (~%50). The slider is his knockout pitch, even if it probably isn’t one at the MLB level. Patterson will throw the slider anywhere from 80-84, and at times it can flash plus with two-plane break. However, too often he’ll fail to get on top and it’ll either flatten out or it’ll lose RPMs and become a slurve. The change will be used to help Patterson against lefties, and it ranges from 80-82 with some run. Finally, he’s added a cutter this year, which was 85-87 the few times I saw him throw it. At least I think that was a cutter.

Mechanically, there’s effort in his motion and a lot of moving parts. There’s some tilt that can cause him to stay over his back foot too long and cause him to throw uphill, but it also adds deception to his pitches as it hides his release point well. Unfortunately, the iffy repeatability has led to some fine command issues, which has caused his control to suffer against pickier advanced bats.

Whatever ends up happening today, we won’t learn a ton about him from this start (especially given the anticipated conditions), but if he can stay within the strike zone he has the potential to be effective against a team that’s seeing him for the first time.

"A highly rational Internet troll." - Los Angeles Times
@ChadMoriyama
Previous Dodgers 9, Twins 4: Hey! Offense!
Next Dodgers 4, Twins 3: That Was So, So Horrible Even Though It’s A Sweep