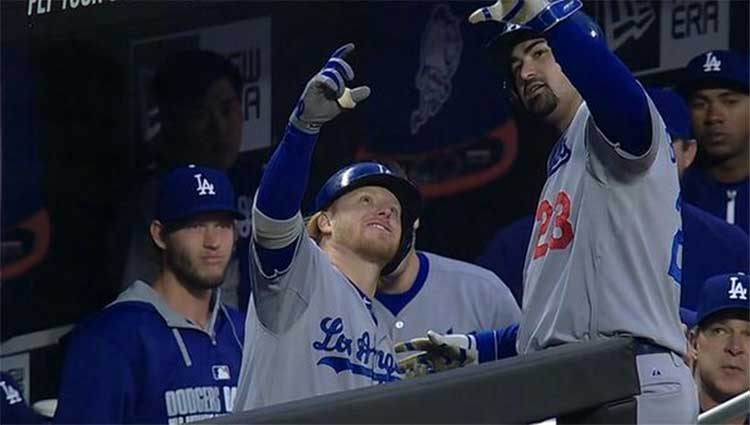 Clayton Kershaw cares not for your selfie, guys

As I quickly learned sitting in the press box tonight, there aren’t Mets fans or Dodger fans. There’s just Hyun-jin Ryu fans, as the sizable Korean contingent both within and outside the box cheered pretty much every move he made. And for the most part, that was fine. Ryu was never really dominant, but eight of the nine hits he allowed were singles, and even though he loaded the bases in the third, he worked his way out of it with a strikeout of Curtis Granderson. That fell apart a bit in the sixth, when he allowed singles to David Wright and Granderson before allowing Eric Campbell‘s first major league homer, snapping Ryu’s road scoreless streak at 33 innings.

Still, to expect perfection was unrealistic, and Ryu’s first game back from the shoulder soreness that put him on the disabled list can’t be considered anything other than a success. (As a Korean journalist I chatted with said, “sometimes he is a bear, sometimes he is a fox.” I’m not entirely sure I understand what that means, but I do know that I loved it.)

Fortunately, the Dodgers backed up Ryu with a surprising display of power against rookie Jacob deGrom. In the second, Adrian Gonzalez crushed a homer for his third straight game, then Yasiel Puig and Hanley Ramirez went back-to-back in the sixth. Ramirez’ was without a doubt more impressive for its sheer speed and distance, but Puig’s did feature the usual batflip (via Chad):

In the bottom of the seventh, Ryu came out as though he was going to stay in the game, but it was really just a ruse designed to give Brandon League another toss or two in the bullpen, as Don Mattingly made the change before the inning began. It didn’t necessarily go smoothly, though that wasn’t entirely League’s fault. League got two of the first three, allowing only a perfectly placed bunt single to Juan Lagares, and then Wright hit one hard to right field… that Puig dove for and just barely missed, allowing it to get behind him and Wright to end up on second, with Murphy at third. Fortunately, League got Chris Young to ground out to Justin Turner at third to end it.

Brian Wilson had a mostly clean bottom of the eighth, allowing a single hit without a walk or a strikeout; Kenley Jansen made it through the ninth, though it was marred by a Lagares triple. He came in to score on a groundout, making Wright the tying run with two outs, but Jansen managed to . The Dodgers are now three games over .500, with Zack Greinke tomorrow against the Mets and Clayton Kershaw on Friday in Philadelphia. That’s not a bad place to be.