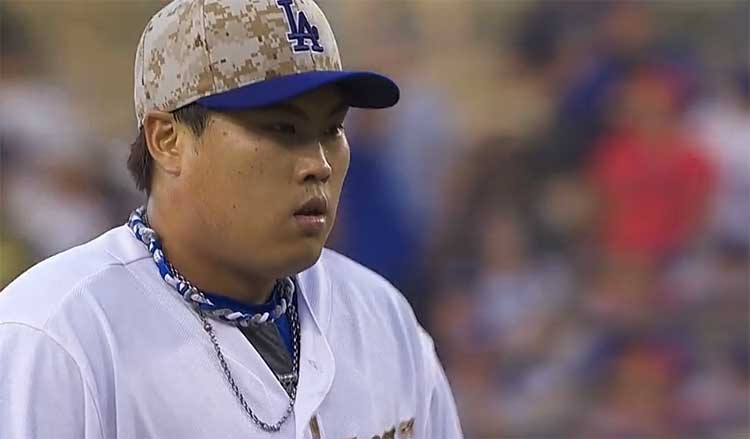 I guess you could call me a “professional baseball writer,” in some sense. Or while I suppose that’s not true in a “100 percent, I do literally nothing else” manner, I can say that everything I do for work is related to sports somehow, and I’ve been writing about baseball for about seven years now. I’ve seen a lot of things, and I like to think I have a pretty good ability to process what’s going on and to explain in a coherent, thoughtful manner. Now here’s my internal monologue for, I don’t know, the last hour or so of Hyun-jin Ryu‘s game tonight:

I’d like to say I was being more eloquent than that. I wasn’t. It was a whole lot of ohmygodisthishappeningITISitreallyisbaseballthebest!, as Ryu attempted to one-up Josh Beckett‘s Sunday no-hitter with a perfect game, the Dodgers’ first since Sandy Koufax in 1965, the first time in baseball history that a team would have had two consecutive no-hitters…. right up until it wasn’t.

After spending more than 30 minutes sitting and watching the Dodgers’ three-run seventh inning, including Justin Turner‘ 16-pitch walk (Alex Cora was not impressed), Erisbel Arruebarrena‘s first extra-base hit, Ryu himself contributing to a run scored when his infield grounder to Zack Cozart was botched, and Carl Crawford‘s two-run double, Ryu came out for the top of the eighth. His first pitch was a ball. His second was a hard-hit ball by Todd Frazier to left field, ending the hopes for a magical night.

And that really should be it. We should just be talking about how wonderful Ryu was, and Turner’s multiple great defensive plays at third base, and not getting caught up whether it was a “perfect game” or a “shutout” or a “one-hitter” or whatever. Not being perfect isn’t the same thing as not being great. Ryu was great. He was so, so great.

Unfortunately, baseball is a fickle beast. With the perfecto dead, along with the Dodger streak of 56 hitters retired in a row dating back to Saturday, things got a lot less fun. Ryu lost it pretty much right away, allowing Ryan Ludwick to single Frazier to third, then Chris Heisey to score Frazier with a sac fly, then Brayan Pena to single for Cincinnati’s third hit.

That brought on Brian Wilson, and, well, we’re really going to have to have a serious talk about Brian Wilson. Wilson struck out Devin Mesoraco. That’s good! But that was about all that was good about Wilson, because after he walked Skip Schumacher to load the bases (!), he allowed Billy Hamilton to double (!!), scoring two to make it 4-3. (This will get lost in the midst of everything else, but it has to be noted that Yasiel Puig made an outstanding play to get the ball into the cutoff man so quickly, all but certainly preventing the tying run from scoring.)

Don Mattingly & Rick Honeycutt desperately stalled for time — maybe Wilson shouldn’t be in these situations, guys, or at least if he is, at least have J.P. Howell up with him — before managing to rush Kenley Jansen into the game. Jansen struck out Brandon Phillips in a huge spot, then made it through the ninth inning, though not without some heartburn. Jansen retired the first two, then allowed a Heisey single (he advanced to second on a Drew Butera passed ball) and walked Pena, before getting Mesoraco to fly out to end the game. Let’s not gloss over how nice of a job Jansen did, after being put in a bad situation.

Wilson allowed three of the four men he faced to reach, but thanks to Jansen, not a single run was charged to him. ERA for relievers: the best. (Ryu’s actually went up from 3.00 to 3.10.) Someone asked me on Twitter whether Brandon League should be taking Wilson’s high-leverage innings, and as ludicrous as that sounds… I don’t have a snarky reply to that. Wilson can’t be anywhere near important innings right now. But anyway, that’s a problem for another day. For tonight, Ryu. The best.

It’s all good, though, Cincinnati: you get Zack Greinke tomorrow and Clayton Kershaw the next day. Good luck with that.

Mike writes about lots of baseball in lots of places, and right now that place is MLB.com.
@mike_petriello
Previous Reds @ Dodgers May 26, 2014: Injuries, Kemp out, Vin sick
Next 2014 MLB Draft: Dodgers’ Big Board, v 2.0