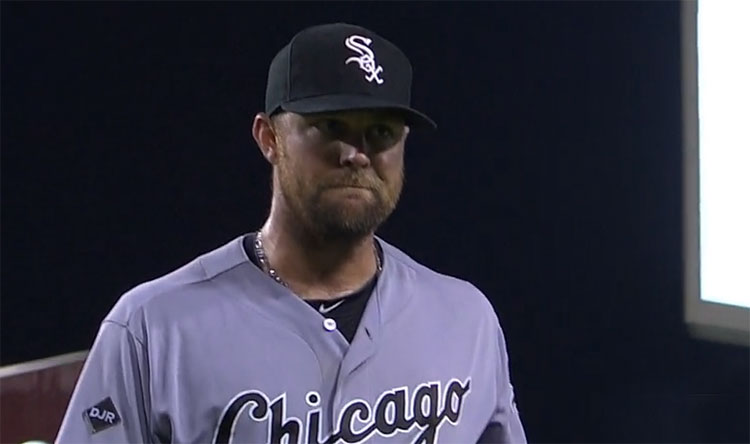 Leury Garcia is maybe 5-foot-7, had never hit a homer in 162 previous major league plate appearances, and he’d had only 13 in 2004 minor league plate appearances — I don’t know if any were inside the park, but since he had seasons of 51, 31, and 30 steals, I’m going to presume that at least one was — so when he took Josh Beckett deep in the third inning tonight, I figured, well, this is going to be the bad Beckett, isn’t it. But you know, even though Beckett gave up a second homer, a no-doubter to Adam Dunn in the fourth, this really isn’t about Beckett. He was fine. He wasn’t terrible. He wasn’t great, obviously, not when he let 11 runners reach base, but both homers came with no one on, he didn’t let Jose Abreu smash him into tiny little pieces, and he survived through six. For a fourth or fifth starter, depending on how you feel about Dan Haren at any given moment, it’s perfectly acceptable.

The problem, as it’s so often been of late, was the complete lack of support provided by the offense, which contributed only a perfectly-placed Dee Gordon bunt single (quickly erased when Tyler Flowers threw him out stealing, after Yasiel Puig completely inexplicably tried and failed to bunt himself) and a somewhat fluky Gordon double (it bounced off the third base bag) against someone who vaguely looked like John Danks. And since Danks had a hit of his own — charitably called as such, since Gordon’s throw to first was poor — he essentially canceled out anything the Dodgers had to offer.

Danks left after that eighth-inning double, after which Zach Putnam allowed Gordon to steal third when he wasn’t busy walking Puig. This turned out to be bad, because you never want Puig to not be hitting, and Hanley Ramirez‘ bouncer to third base forced Puig at second, though Ramirez’ hustle to beat the throw did allow Gordon to score. Scott Downs got Adrian Gonzalez to ground out, and that was that. Old friend (I guess?) Ronald Belisario took down Matt Kemp, Scott Van Slyke, and Justin Turner. Quietly. As always. Boooo, went the crowd. Boo, indeed.

Only one other time did the Dodgers even manage to get a runner to third base, and to achieve even that mild success A) took a fielding error by second baseman Gordon Beckham to allow Gonzalez to reach; B) required the White Sox to terribly botch the fundamentals of a rundown; and C) lasted for about two seconds after Gonzalez rounded third and was cut down (after a replay) trying to get back.

It must be said, again, that this is merely a slump. This offense has the third-best wRC+ in baseball. Every team, every year, will go through a down time. There’s too much talent here for this to keep up. But I’m not blind to the fact that the last week has been really, really tough to watch, more boring than anything. As I’ve said privately, I’m not really at all disappointed that there’s no game tomorrow. We could use the break. So could they.

Ramirez, like everyone who wasn’t Gordon, went hitless. He did do this, though:

Mike writes about lots of baseball in lots of places, and right now that place is MLB.com.
@mike_petriello
Previous White Sox @ Dodgers June 4, 2014: The Lefty Lineup Shuffle
Next History of the No. 22 pick in the MLB Draft