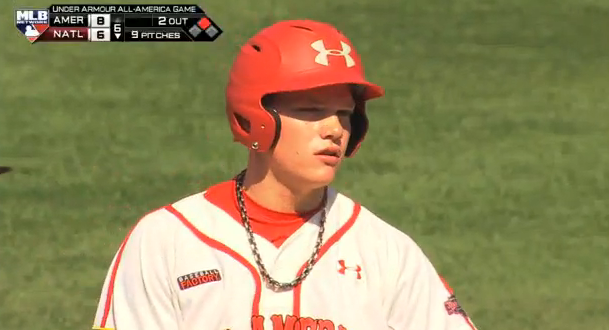 With the No. 62 pick (2nd round) in the 2014 MLB Draft, the Dodgers selected LHP/OF Alex Verdugo out of Sahuaro High School in Tucson, AZ. Verdugo was a two-way player and many had thought he recently clearly separated himself as a LHP prospect, but the Dodgers have taken him as an outfielder.

When the spring began, Verdugo was one of the few two-way prospects in the Draft class that may have had a split camp over whether he should hit or pitch. As the Draft drew closer, it became increasingly apparent that most teams saw his future on the mound.

As a pitcher, Verdugo projects as a No. 3 starter at the big league level. While not the biggest pitcher in the world, he does have a compact and efficient delivery. His three-quarters delivery gives him good angle and movement on his fastball, which averages 89-91 mph and has reached 94. He could add more velocity if he focuses on pitching full-time, and he also features a promising curveball and a changeup with some life.

The athleticism that made him a solid outfield prospect, and would help him be a potential two-way player at Arizona State, should aid him in his development as a pitcher, though the MVP winner for the National team at the Under Armour All-America Game at Wrigley Field last August will have to get past some makeup concerns to keep his Draft stock up.

Which helps … not at all since he was taken as an outfielder.

Verdugo had apparently told some teams he preferred to hit, so he should be excited that the Dodgers are giving him that chance. Also, the pick makes a lot more sense when you consider that he’s already agreed to terms with the team, according to Chris Cotillo.

Sources: #Dodgers already in agreement with 2nd round pick (#62) Alex Verdugo on bonus figure. ASU commit not going to college.

With the bat, Verdugo uses a long stride that helps generates plus bat speed and has projectable raw power. His ceiling is as an average defender with a good arm in right field that has 20-25 homer potential and the ability to square up the ball enough to hit for a solid average. As with most players, the plate discipline could be an issue in the present and will need to develop as he moves levels. A risk to take him as an outfielder, but Logan White has shown in the past that he doesn’t care much about the consensus in terms of what position a player should stick at.

Baseball America has noted that scouts relayed that he’s displayed bad body language, effort, and immature behavior this past season, which makes him perfect for Mark Mulder, opposing broadcasters, and opposing fandoms to whine about when he becomes an All-Star for the Dodgers.

"A highly rational Internet troll." - Los Angeles Times
@ChadMoriyama
Previous Dodgers select RHP Grant Holmes at No. 22 in the 2014 MLB Draft
Next In Which Clayton Kershaw And Kenley Jansen Imitate One Another