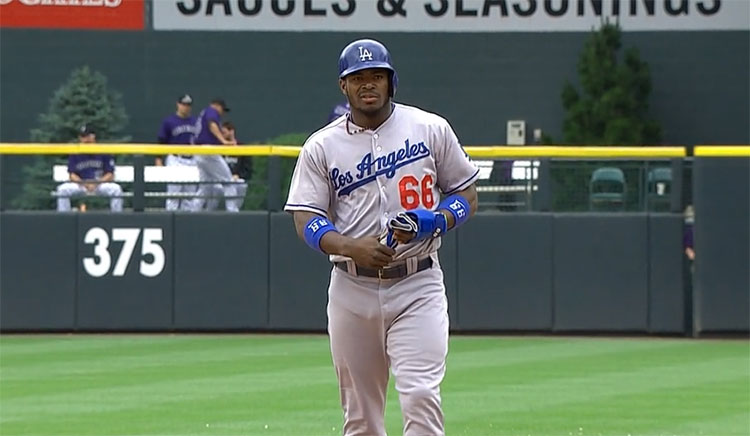 (“Hey Mike, the game is still on! Tied in the tenth!” I know. The recap was already about a billion words long and the game isn’t even over. This news is going to need its own post.)

Just hours ago, I pointed out how much I hated seeing the Dodgers in Coors Field. I don’t believe in curses, but something always happens there. Always. As I said, “I still can’t shake the feeling of dread that occurs every time the Dodgers venture into this place.”

I was joking, mostly. There’s not really anything associated with a single ballpark that causes injury. But then… in the bottom of the fourth, Dee Gordon didn’t run out to second. Chone Figgins did, thanks to what was termed “discomfort” in Gordon’s right hip. The Dodgers didn’t score in the top of the fifth, and then Yasiel Puig didn’t run out to right field in the bottom of the inning; Scott Van Slyke did, with Puig being removed with a “right hip flexor strain,” presumably suffered on this slide in the top of the fourth:

Unbelievable. (And, in the eighth, Hanley Ramirez made a similar-looking slide while stealing a base. Why does no one know how to slide?) The good news, if there is any, I suppose, is that both Gordon and Puig came out of the game. Neither tried to play through it and make it worse, and while we can’t know right now who made those choices, they were the right ones.

It’s obviously much too soon to know the severity of either, though Puig was seen sitting in the dugout for the rest of the game, but it makes for some interesting roster implications. With both out, Don Mattingly was left with only Jamie Romak, Miguel Rojas, and Drew Butera on the bench. Butera is of course the backup catcher; Romak and Rojas had a combined four career major league plate appearances between them. That’s not a situation you can live with for more than a day, and while the Dodgers are infamous for letting injured players sit on the bench without actually putting them on the disabled list — see Mark Ellis and Juan Uribe — they won’t have that luxury if both Puig and Gordon are unavailable for the next few days.

Looking at the depth chart, the 40-man roster is full, and Carlos Triunfel and Erisbel Arruebarrena are the only 40-man position players available. (Triunfel is in tonight’s Albuquerque lineup. Arruebarrena is not, but is still within his 72-hour window to report after being optioned. Yes, Joc Pederson is starting for the Isotopes, too.) Again, this is all very premature until we know more, but the fact that this all happened at once makes it extremely difficult to see them being able to carry two unavailable players, if that’s the case. But hey, why wouldn’t a game where the Dodgers lose two players to injury in two innings go to extra innings?

Mike writes about lots of baseball in lots of places, and right now that place is MLB.com.
@mike_petriello
Previous Dodgers @ Rockies June 7, 2014: Still Terrified Of Coors
Next Rockies 5, Dodgers 4: Walked Off