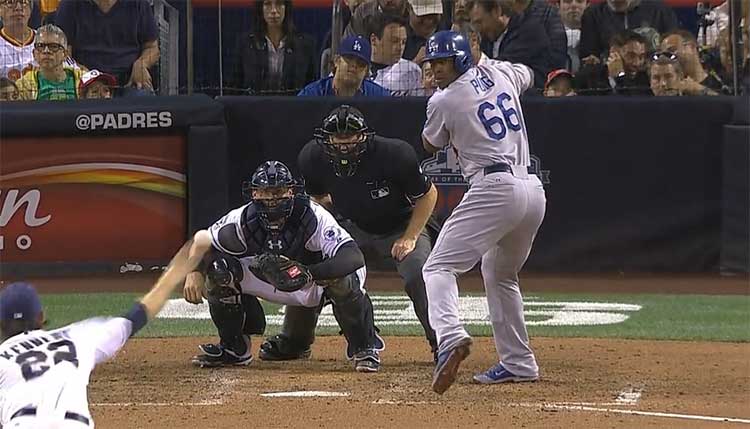 It probably goes without saying that Yasiel Puig has been the most valuable Dodger offensive performer this year. You could maybe argue for Dee Gordon‘s surprising performance, given the uncertainty around second base headed into the year and especially after what happened to Alex Guerrero, or maybe even A.J. Ellis, simply because of how little value the team got out of the catcher position when he was hurt, but no: it’s Puig. He’s been worth about three wins to the Dodgers less than halfway through the season; he’s been pretty obviously one of the best players in baseball.

And yet: I would really, really like to see him not in the lineup for the next few days. Why? Well, here’s Dylan Hernandez before yesterday’s game:

Puig sounded on Friday night as if he was resigned to the reality that he will have to continue playing with discomfort in his left hip. Puig experienced tightness in the hip and had to be replaced by Scott Van Slyke in the eighth inning of the Dodgers’ 6-5, walk-off loss to the San Diego Padres. The right fielder said he has played with discomfort since June 7, when he made an awkward slide as he tried to break up a double play in Colorado. He said he receives treatment from the medical staff before each game.

That’s this play, if you’ve forgotten:

The hip forced him out of that June 7 game, kept him out on June 8, made him leave early on Friday, and had him noticeably limping yesterday. While the team seems very aware of the way Puig’s all-out style of play carries risk and insists that it hasn’t affected his performance, it’s difficult not to see this stat line and think otherwise:

That’s just 53 plate appearances, of course, and so sample size issues are at play, though it’s not like it’s just been an unlucky two weeks for Puig; his BABIP since June 7 is still .343. And yet he plays, despite obvious discomfort and increasing evidence that the hip is affecting his play. If there’s anything I’ve consistently harped on over the years, it’s how much I hate seeing players attempt to tough their way through injury, both hurting their team with lackluster performance and risking major injury. That generally applies to pitchers, but not always; just remember how obvious it was that Matt Kemp couldn’t play through his injured shoulder at the end of 2012, and how awful Jerry Hairston was that same year thanks to months attempting to play through injury.

As usual, #notadoctor and all that, so I won’t pretend that I know exactly what’s going on with the hip or how much he’s risking it. But I do know that we’ve seen this movie many times before, so you’ll forgive me for being terrified that this isn’t going to end well. The Dodgers have outfielders, even without Carl Crawford. They have three shots to use the designated hitter this week in Kansas City. Please, please, don’t allow Puig to do something that’s going to cost him serious time. It’s not worth it.