Tonight, the Dodgers will go for a sweep against the Giants behind Hyun-jin Ryu. Facing them is the newest Giant, Jake Peavy. Peavy was acquired for two pitching prospects yesterday morning. After the trade, we’ve heard a lot about his prior success against the Dodgers. He has pitched 167-1/3 innings against them, while posting a 2.21 ERA. He also has a 14-2 record against the Dodgers, which some people care about for some reason.

It’s a good narrative to build. A player coming back to a division he did extremely well in, to a manager he played extremely well for. To top all of that, his new team is in a tough division battle against a team he pitched extremely well against. The winner of tonight’s game is in first place. It’s a great story.

Here’s  the problem, though. That story means absolutely nothing. Here’s a breakdown of Peavy’s innings pitched against the Dodgers by year: 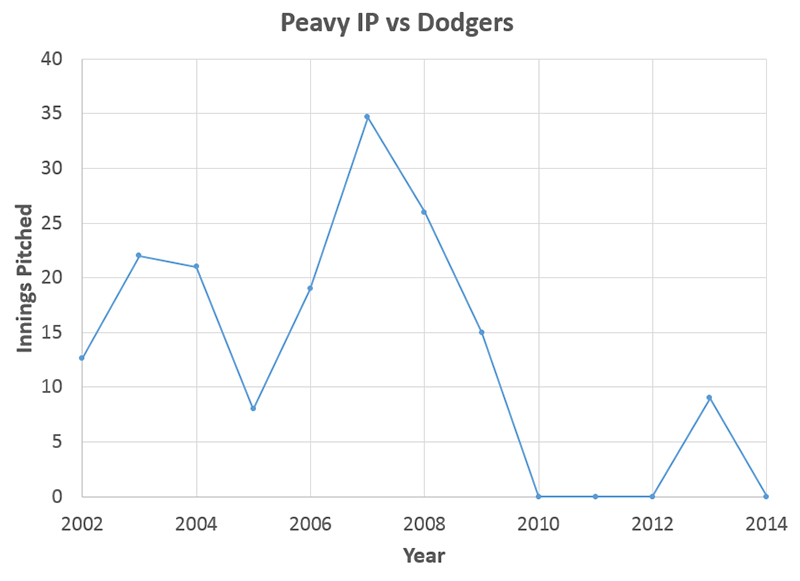 Only nine of Peavy’s 167-1/3 innings have come since he was traded to the White Sox in 2009. 94% of the innings were pitched before Peavy’s 28th birthday. He’s 33 now. Yes, Peavy did pitch well against the Dodgers last year; a complete game with one run and three hits allowed in the middle of the Dodgers’ 42-8 run. But in those nine innings Peavy only struck out five batters. His ERA for the start was 1.00, but his FIP for the start was 3.71. It was dominant in the run column, but not around the edges.

The fact is that the overwhelming majority of Peavy’s success came during his extremely good peak. In 2007 he had the best FIP and ERA in the majors on his way to a Cy Young award. You’ll notice that 2007 was also his year with the most time against the Dodgers.

Jake Peavy is a completely different pitcher now, a bit past his 33rd birthday, than he was five years ago. In his 2007 peak, his fastball averaged a bit over 95mph. This year, he’s averaging around 91. His FIP-, which is adjusted for park and league (neither of which did him any favors this season) is 120, compared to his career average of 88. He has declined significantly since the Dodgers faced him regularly. The 120 FIP- is only slightly better than what Dan Haren has delivered to the Dodgers this year.

People who cite Peavy’s numbers against the Dodgers (including ESPN tonight, probably) are trying to tell a narrative. It means absolutely nothing for the present. All the numbers tell you is that Peavy was one of the best pitchers in baseball for a time. Now he is not. There isn’t much else to it.

The Dodgers are using the same lineup for the third day in a row, which is surprising. Andre Ethier is dead, I guess. As buzz starts to build around the possibility of a Matt Kemp trade (more on that tomorrow), it seems odd that Ethier appears to be the current odd man out.