Now that the Dodgers have gone through the July trade deadline without doing anything (unless you count Darwin Barney), the waiver trading process looms on the horizon. There’s an important annual reminder to be made, and that’s the fact that you’re going to hear a lot about Dodger players going through the system. Carl Crawford, Andre Ethier, and Matt Kemp will be put on waivers. They’ll all clear, and it won’t result in any imminent moves to make a path for Joc Pederson. The same will happen to Adrian Gonzalez, Dan Haren, Josh Beckett, Your Favorite Player, etc etc. It’s just a procedural thing. It doesn’t mean that the Dodgers are giving up on somebody you like.

Speaking of waivers, one of the best remaining rotation upgrades might have exploded tonight, via Phillies beat reporter Matt Gelb (read bottom to top): 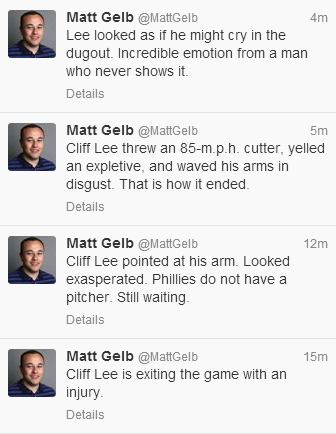 So, you can probably put the chances of a Cliff Lee acquisition somewhere near zero. He left with a flexor pronator strain, which is the same injury that sent him to the disabled list earlier this season.

As for other acquisitions, Cole Hamels probably won’t get to the Dodgers on waivers and the Phillies might not even want to trade him. Most of the remaining options are probably unappealing. There’s still a good chance that something will happen, but it might be more Ricky Nolasco or Edinson Volquez than David Price. There might be some relievers there for the Dodgers to go after as well. It’s important to keep in mind that trades like what the Dodgers pulled two years ago are the exception, not the rule. We might not see a single move in August as big as anything that happened today.

Oh right. Clayton Kershaw has quite the act to follow after Zack Greinke‘s great outing yesterday. He’ll be facing Julio Teheran. Teheran is having a promising season, posting an ERA of 2.71 and FIP of 3.35 thus far. He’s a little BABIP lucky, but most of his numbers are better than they were in his decent rookie season. He’s 23, and he has a very bright future. Unfortunately for the Braves, being up against Clayton Kershaw makes the good starter a bit less daunting.

In organizational news, Scott Elbert cleared waivers, and was outrighted to AAA Albuquerque. Not surprising for somebody who hasn’t pitched in the majors since 2012. Elbert had the right to decline the assignment, but he did not, so he will remain within the Dodger organization. Erisbel Arruebarrena was suspended for five games for his role in the brawl last week, which honestly seems a bit light.

It has now been a week and one day since Andre Ethier played defense.

Daniel Brim grew up in the Los Angeles area but doesn't live there anymore. He still watches the Dodgers and writes about them sometimes.
@danielbrim
Previous Congratulations, You Survived the Deadline
Next Dodgers 2, Braves 1: Oops