Home/road same team series are still strange to me, even though they’ve been around for a couple of years. Tonight, the Dodgers and the Angels move down the freeway into Orange County (which is not Los Angeles). The move does have one benefit; the Dodgers get to use a DH for a couple of days. Tonight, the Dodgers are inserting Matt Kemp into the role, allowing for both Andre Ethier and Carl Crawford to start at the same time. As Bill Shaikin points out, the Angels do not have a left-handed pitcher in the bullpen. Barring injury, Scott Van Slyke will likely have the day off. Tomorrow, with the left-handed C.J. Wilson pitching, Ethier and Crawford will likely spend the game on the bench, hopefully with Hanley Ramirez getting a day off from playing defense.

At this point, we’re all ready to move on from tonight’s starter, Dan Haren. Here’s a map of every home run Haren has given up this year: 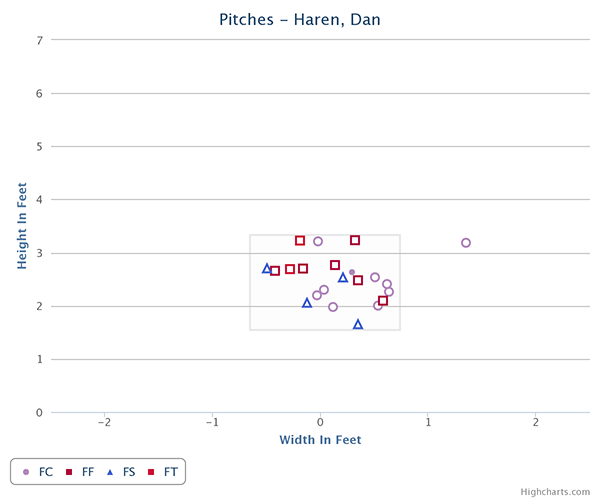 There’s a lot of fat pitches there, plus one outlier hit by Corey Dickerson in Colorado.

Only four of the home runs have come with Haren ahead in the count. However, Haren is still pitching from ahead of the batter almost exaclty as often as when he wasn’t allowing home runs. Between the beginning of the season and May 7th, Haren allowed 2 home runs and threw 27% of his pitches while ahead of the batter. Since May 12th, Haren has given up 20 home runs, and has thrown 26% of his pitches while ahead in the count. Unfortunately, the home run problem isn’t that easy to diagnose. The 20 home runs allowed since May 12th are five more than Giancarlo Stanton has hit in the same time period.

In news that is not particularly surprising, Chone Figgins was designated for assignment today. Figgins had been rehabbing from a hip flexor injury in Albuquerque for a few weeks, and the Dodgers were forced to promote him or remove him from the roster. Figgins’ signing was mostly maligned, but he was actually fairly useful this season. He had a fantastic 18.4% walk rate, which led to an excellent .373 OBP. Figgins didn’t have much punch in his bat otherwise, but the walk rate and OBP led to a 99 wRC+.

The reason why Figgins was let go, other than the fact that the walk rate was not likely to continue, was that he isn’t really a shortstop. He played six innings there this year and it was his first time at the position since 2006. Figgins would have replaced Miguel Rojas, leaving him and Justin Turner to back up the injury-prone Hanley Ramirez. Turner can fill in at short in a pinch, but it definitely isn’t his strongest position. Leaving Rojas as a defensive replacement seems like a good decision, especially with Darwin Barney and a healthy Alex Guerrero as additional depth in case of injury. Figgins might not be gone for good, either; he’ll likely clear waivers and might return as rosters expand next month.

Daniel Brim grew up in the Los Angeles area but doesn't live there anymore. He still watches the Dodgers and writes about them sometimes.
@danielbrim
Previous Dodgers 5, Angels 4: Clayton Kershaw is apparently human
Next Dodgers 2, Angels 1: A Haren Miracle