About a week ago, it was revealed that Matt Kemp had made changes in the batter’s box and that those changes are at least partially responsible for his increased production. Kemp himself didn’t expand on it, but assistant hitting coach John Valentin opened up a bit to Pedro Moura of the Orange County Register.

So Kemp is a slugger again, at least temporarily, and he’s clearly doing something differently. He has acknowledged that, saying repeatedly last week that he has “worked on things.”

When pressed to describe those things, he has been almost comically vague. But Dodgers assistant hitting coach John Valentin revealed that Kemp has changed the way he stands at the plate, and video evidence confirms it.

“He actually has straightened his stance,” Valentin said. “It used to be locked. What that created was a difficulty to have the freedom to stay through the baseball. This offers a clear path to hit balls in and away.”

As for the exact time period, it happened during the series against the Cardinals from July 18 to July 20.

During the opening series of the second half in St. Louis, Kemp went to Valentin and hitting coach Mark McGwire finally ready to make alterations, and so they started tinkering with his feet almost immediately.

The numbers certainly back that up.

But were there really significant, noticeable changes? Yes, and I think it’s quite obvious once you examine the visual evidence.

(As an aside, my dad said “I’m telling you, Kemp’s crouching too much. Write it on your blogger.” to me while we watched a Spring Training game or something, and I brushed it off cause he was coming back from major injury and all that. As soon as I read this story, I immediately thought, “Never gonna hear the end of this.”) 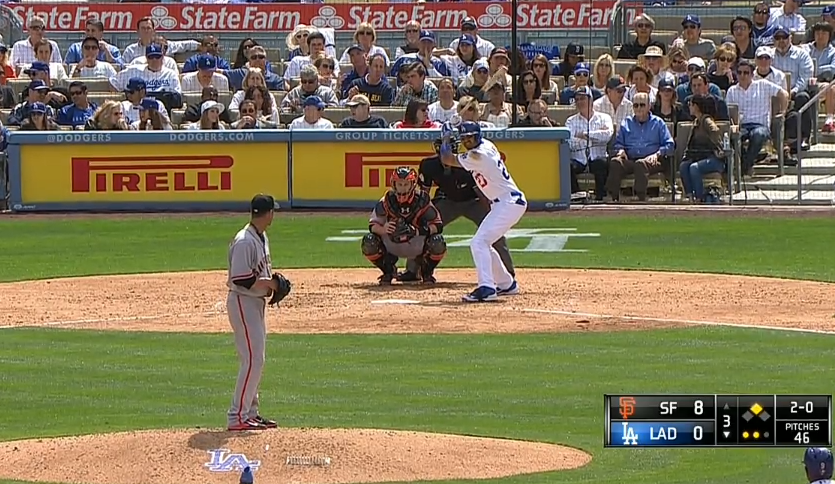 And here’s Kemp on June 4, when his OPS hit a season low: 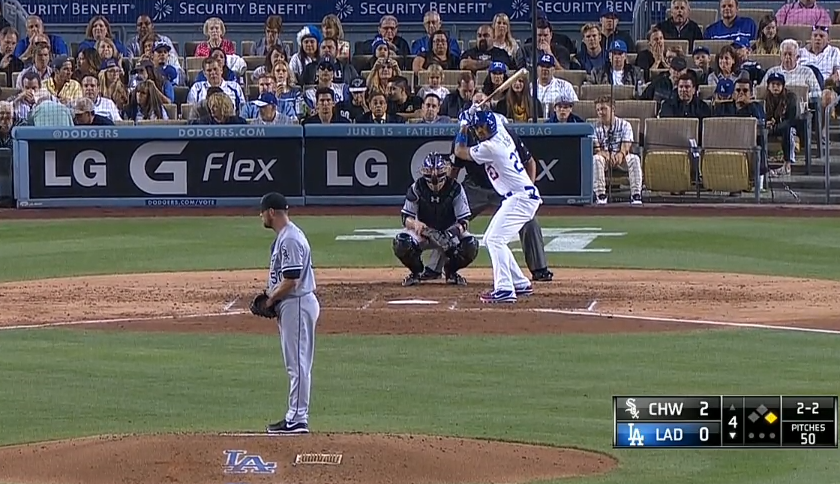 His feet are slightly closed as they’ve always been, but he’s a little more bent over at the waist than in past seasons, especially in April. But in June, while going through struggles, it seems as though he turned his left shoulder inward in an attempt to generate more torque in his swing (power). As a result, his back elbow elevated, which likely affected his swing path.

Now here’s Kemp on July 29, during the first game at home since the changes: 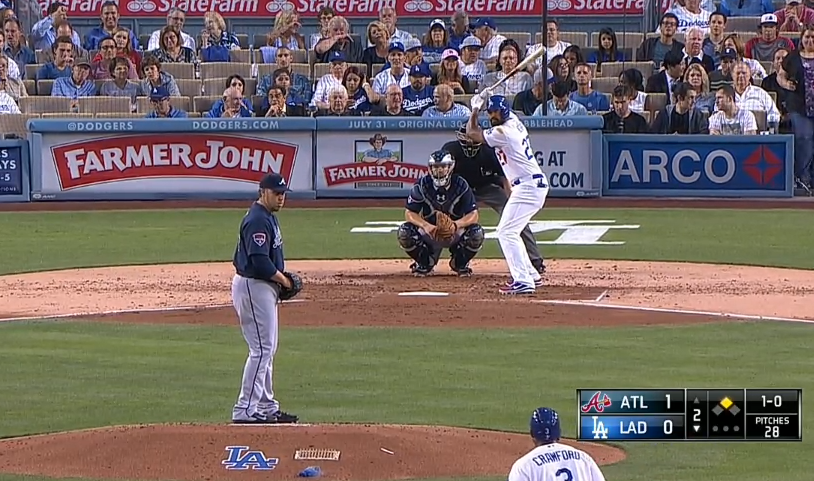 As Valentin said, it all starts with the feet. He’s obviously opened his stance a bit, something that I’ve never really seen him do while setting up. Kemp has always opened his stance during the footstrike phase (sometimes too far) of the swing, but he’s never started in that position that I can recall. Additionally, Kemp’s more upright at the waist when compared to the start of the year, and his shoulders are now square to the pitcher, which lowers the angle of his back elbow as well.

The changes with his feet should allow him to get to the inside pitch with more power and greater frequency, which is important if his raw bat speed is no longer the same anymore. But in my opinion, the real advantage comes from squaring his shoulders to the pitcher since that allows him to use a bat path that stays through the hitting zone longer. Before, with his elbow raised and his shoulder turned in, Kemp frequently wasn’t able to square balls up because his swing would start with either his right shoulder dropping and/or his left shoulder opening during the loading phase. Thus, he would end up compensating for the longer swing by rolling over pitches with his hands to get the bat head in the hitting zone, or he would get lead shoulder dominant (especially when he was fooled) and the bat head would drag rather than get through the zone.

Kemp will always have significant swing and miss in his game, but he’s much more consistent now, and when he squares up the ball consistently, that has usually led to damage.

So there’s definitely been change going on with Kemp. While he hasn’t reworked his swing or anything, he’s made small mechanical adjustments that have perhaps helped him compensate for aging and a decrease in raw athletic ability following injury. This all isn’t to say that Kemp’s back to 2011 level or anything close. Rather, it’s visual evidence to back what Kemp and Valentin have revealed about changes happening, and it’s shown that there’s enough logic and reason behind the adjustments to believe they could lead to a more permanent positive change in value at the plate.