Brian Wilson Is Pitching Better Than You Think He Is

The Dodgers have been a lot of fun to watch lately, haven’t they? Despite a bit of a hiccup in Milwaukee over the weekend, they have a comfortable six-game lead in the NL West and the best playoff odds in the league. It helps that the Giants have been unable to get out of their own way, but only one team, the A’s, can boast of more wins, though both the Angels and the Orioles (!) have better winning percentages because they’ve played fewer games. For the first time in a while, the controversies — where’s Joc Pederson! Where will Matt Kemp be! Is there a center fielder? How banged-up is Hanley Ramirez today? What’s Alex Guerrero‘s status? …and so on — seem like they’re on the side of the road. The lineup, Ramirez’ latest DL stint aside, is more or less set. Kemp has looked like his old self. Yasiel Puig has been a capable center fielder.

Even Roberto Hernandez and Kevin Correia pitched in, though I’m not certain that either can continue to do so. But for today, things are good, so let’s look at one of the things that fans still think isn’t: Brian Wilson. A 4.66 ERA is ugly, and while you know my feelings on ERA for relievers, a 4.19 FIP and 4.05 xFIP doesn’t really do much to help. He’s still missing bats, but he’s missing the plate, too. Of the 359 pitchers with at least 30 innings thrown, only three have a higher BB% than Wilson’s 14.4. 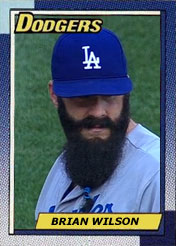 None of that is good, and I won’t pretend that it is. If you still get uneasy seeing him in a big spot, that’s totally fair. But what I at least want to do today is at least make the case that it’s unfair for Wilson to be lumped into the Chris Perez level of awful, as I think too many still perceive him as. I’ll admit that what I’m about to do is to split a small sample size into a smaller sample size, and that’s always going to be flawed. Of course, 10 of the 20 earned runs he’s allowed this year came in just three appearances; he’s allowed 10 in the other 43, so any kind of bad game is going to impact a short-inning reliever’s ERA for quite a while. Bear with me here, anyway. The point is less about reviewing what he’s done and setting expectations for what he can be.

Remember just how terribly the season started for Wilson. After a scoreless appearance in Australia, he blew the domestic opener, then immediately went on the 15-day DL with irritation in his right elbow. When he returned, he pitched seven April games, imploding in one against Philadelphia, allowing 14 baserunners while striking out only four. May was a little better, but only somewhat. While he at least got strikeouts — 16 in 12.2 innings — he also continued to have walk issues (10) and was hit hard, giving up a .255 /.387/.412 line. At one point, on May 14 against the Marlins, he struggled to top 90 mph, and even Don Mattingly admitted some concern:

You couldn’t see the velocity out there,” he said after Wednesday’s game. “Some of those are 88-89, stuff like that, even less. It does concern us a little bit, but then toward the end of the inning, he’s dialing it up. The other day he comes out, it’s 88-90. By the end of the inning he’s throwing 96. But there are concerns.

This is all setup. Here’s the upshot. Mattingly made those comments on May 15:

You could attribute the rebound to Mattingly’s comments, though that would be silly, foolish and without any actual connection. You could say that it’s because Wilson himself admitted that he’d spent weeks of the spring quietly trying to pitch through discomfort, brought on by an attempt to be ready for the unusually early foreign start to the season, and in the process managed to trash the first two months of the years trying to get right. There seems to be some validity to that. You could also point out this: Wilson is simply throwing different pitches now.

See that orange line? That’s a curveball. He threw it zero times in April; now it’s the pitch he’s using more than anything but his cutter. If you prefer percentages, it’s up from 0 (April) to 2.85 (May) to 7.14 (June) to 11.96 (July) to 27.37 (August). It’s coming at the expense of his fourseam and sinker; again, small samples here, but the sinker wasn’t doing much for him, responsible for eight hits, four walks and only two strikeouts. So far, he’s thrown the curve 59 times and allowed one walk, one single, and hit one. He’s come close to throwing it more just in the first half of August alone than he had in his entire career prior to 2014.

I haven’t been able to find any published stories along the lines of A.J. Ellis suggesting that Josh Beckett throw his curve more often, and this isn’t the same as saying that Wilson’s curve is suddenly an elite new weapon. Likely, Wilson’s success is a combination of multiple factors, like getting his arm into the shape it didn’t seem to be earlier in the year, like improving his control — 14/3 K/BB since the All-Star break — and by giving hitters something new to think about that they’d never had to worry about before. That doesn’t mean that the unbelievably dominant Wilson of late 2013 is back. It does mean that we shouldn’t place undue importance on easily explainable issues from four months ago. Those things factor into his overall 2014 numbers; they may not tell you much about what Wilson is right now.