Following last night’s marathon, today might be a bad time for a “baseball is great, isn’t it?” kind of article. It might be the best time, too. I’m not sure. At least there’s no math in this one, I promise.

Occasionally, there are moments within baseball games or particular match-ups which catch my attention. Every fan is like this, and since I have an avenue to be nerdy about it, sometimes I like to share. I did this a few months ago when two of the best base-stealers in baseball (Dee Gordon, Billy Hamilton) faced two of the best pitchers at limiting the running game (Hyun-jin Ryu, Johnny Cueto) faced each other in the same game. Specific moments like these happened in Tuesday night’s game, so I’m here to be nerdy about that too.

First, we have Clayton Kershaw, the best pitcher in baseball, who needs no introduction. Second, we have Bryce Harper. Harper is still one of the best young talents in the game. Through 1400 plate appearances, Harper has a 125 career wRC+. That’s nearly identical to Matt Kemp‘s career level, and Harper is six months younger than Joc Pederson. He’s having a bit of a down season due to a wrist injury, but in the last few weeks he has looked like normal. He hit two home runs against Hisashi Iwakuma last weekend at Safeco field. He’s young, exciting, and has an extremely high ceiling. 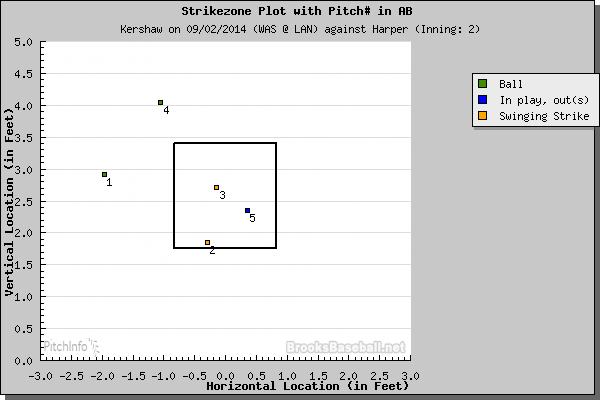 Not much to show here. Kershaw was struggling with his control early in the game, and he missed his spot (low and away) by about a foot.

Kershaw comes right back with another fastball. The target is in the same spot, but A.J. Ellis didn’t need to move his glove. In that situation, it was almost a perfect pitch.

Ellis set up in the same spot for the third consecutive pitcch. Kershaw misses right over the heart of the plate, but Harper swung right through it.

This looks like a waste pitch, but it’s a miss by Kershaw. Ellis wanted the ball low and away again. It could have had a favorable result based on where it missed if Harper was impatient, but he wasn’t.

Noticing a theme yet? On the fifth pitch, and the fifth fastball, Ellis sets up low and away for the fifth consecutive time. Kershaw misses by a bit, again, but all Harper could do was pop it up to Hanley Ramirez. 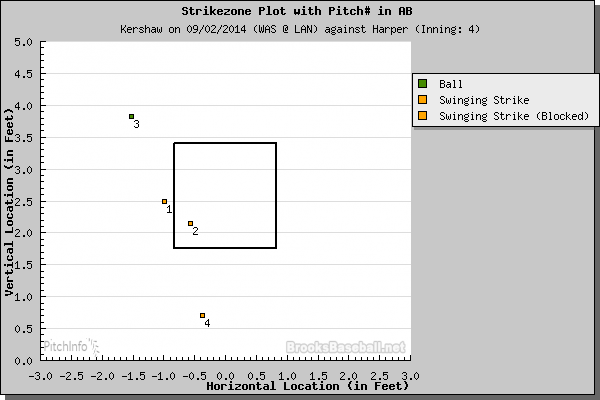 Another fastball, low and away, right at the mitt. Another swinging strike. The “all fastball” strategy is working pretty well. Six pitches, all with the same goal, then…

Well, that’s just mean. After six consecutive fastballs, Kershaw pulls a string and gives Harper a curve. He had no chance.

Again, targeting low and away with a fastball, but Kershaw misses high. It functioned as a waste pitch based on where it missed.

Another curve, this time lower and harder than the first. Harper, perhaps still expecting a fastball (or a slider, which Kershaw never threw), swings over the curve once again.

In the bottom of the fourth inning, Clayton Kershaw singled up the middle against Doug Fister. Dee Gordon followed up with a single of his own, and Kershaw decided to go to third, testing Bryce Harper’s arm:

It was probably a bad decision on Kershaw’s part, but it didn’t matter. If Harper made a good throw, Kershaw would have been out by plenty. If Anthony Rendon tried to tag Kershaw, despite Harper’s wide throw, Kershaw still might have been out. Instead, Rendon threw down to second to try to get Gordon, but he was safe as well. Harper’s bad throw, caused by Kershaw forcing the issue, changed the base situation from a runner at first and two outs to runners at second and third with one out. Two batters later, Adrian Gonzalez singled, driving in both Kershaw and Gordon. This provided Kershaw with all of the offense that he would need. 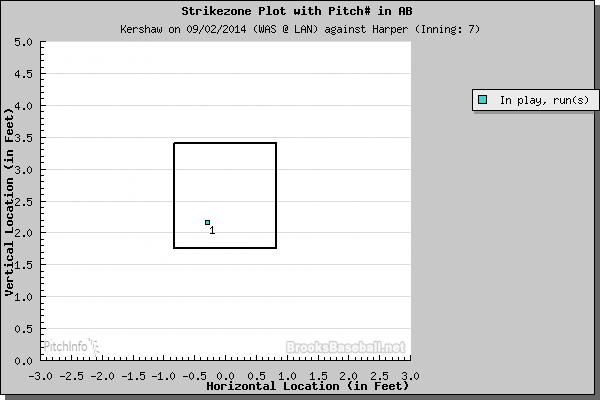 Harper came to bat for the first time since his poor throw. Kershaw had retired every batter between Harper’s last plate appearance and this one. A.J. Ellis wanted, you guessed it, a fastball low and away. If it ain’t broke, don’t fix it, right?

The strategy of pounding Harper low and away made a lot of sense. He definitely has a hole there: 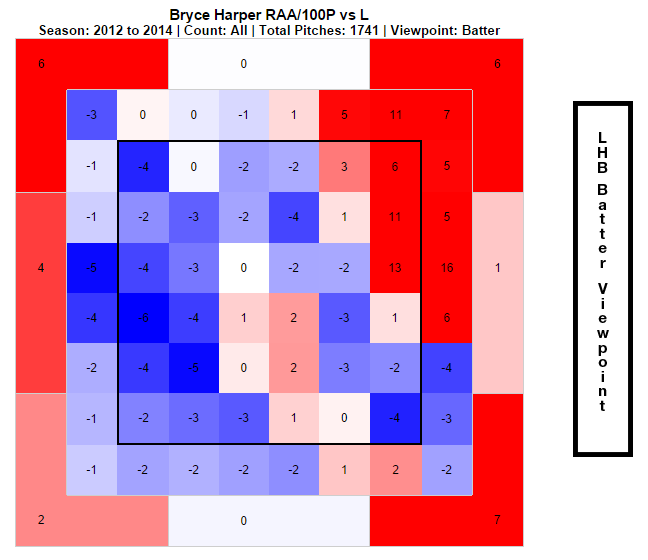 It didn’t matter, and that’s what is fun about baseball. Clayton Kershaw made Bryce Harper look foolish twice at the plate and once on defense. Kershaw logged 14 swinging strikes on Tuesday night, and five of them were by Bryce Harper. But in his third plate appearance, Harper got the last laugh (except that the Dodgers still won). In doing so, Harper was the first left-handed batter to hit a home run against Kershaw since Jay Bruce hit two on September 8th of last season. It was the first time a left-handed batter drove in a run against Kershaw since the same home runs.

In their owns ways, Bryce Harper and Clayton Kershaw are amazing. They did amazing things when put together. And this is just one, of many, reasons why baseball is great.

Daniel Brim grew up in the Los Angeles area but doesn't live there anymore. He still watches the Dodgers and writes about them sometimes.
@danielbrim
Previous Nationals 8, Dodgers 5: The Game That Broke Baseball
Next Dodgers’ bullpen needs saving, but don’t expect Pedro Baez to do it