It’s always nice when superstar players remember they have superstar potential, and Adrian Gonzalez is that guy right now. And he’s playing in such a way that he’ll garner some MVP votes. He won’t win it, but he’ll get some consideration (and too much of it has to do with his fifth consecutive 100-plus RBI season).

Sure, he could have started hitting a ton of singles, but he’s hitting the ball with authority, capped by his 2-home run game on Sunday. That was vintage Gonzalez, and the Dodgers are going to need him with Yasiel Puig and Hanley Ramirez slumping considerably. 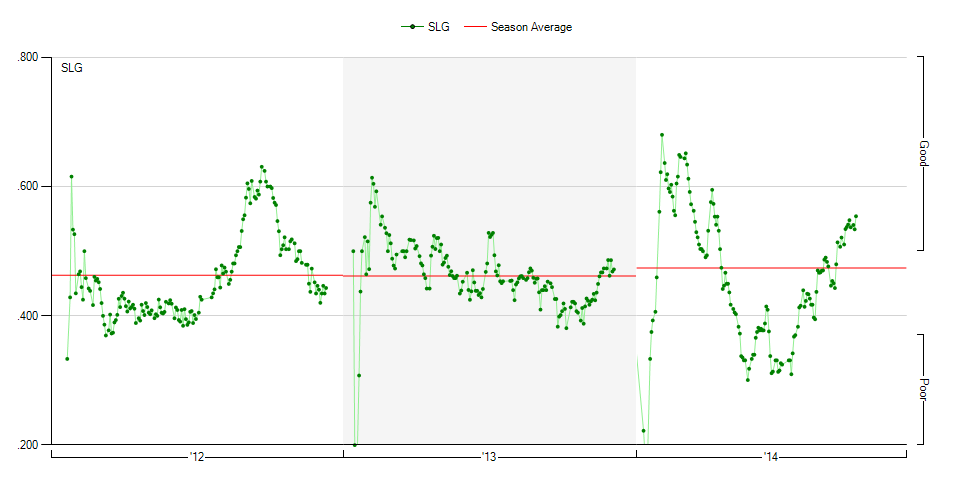 Conversely, his isolated power (third column) has also improved in that time. 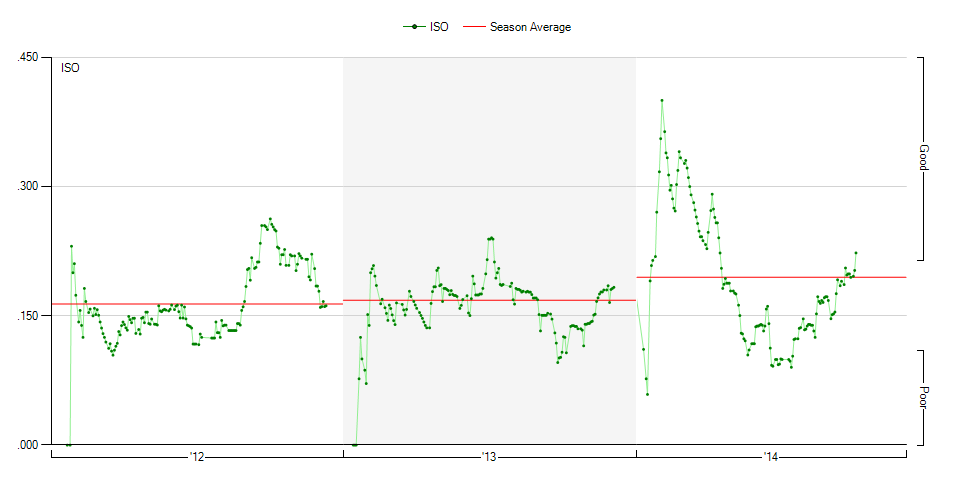 Bat speed tends to decrease as players get older. I thought Gonzalez looked overmatched at times this season against fastballs (especially up-and-away). Since he started his hot streak, he’s pulverizing fastballs: 9-for-21 (.429) with three home runs and a .905 slugging percentage and .476 ISO. He’s also making pitchers pay for throwing him sinkers: 6-for-11 (.545) with a .909 slugging and .364 ISO. His shoulder must be feeling pretty good if he’s hitting the hard stuff this well. And he’s pulling it, which is further proof of a healthy shoulder.

He isn’t doing anything to dispel the theory that lefties are good low-ball hitters, but that isn’t a bad thing.

Matt Kemp‘s resurgence has been nice, but Gonzalez and his left-handed pop could be really important come October. Right now, he’s the Dodgers’ best hitter. If all four of the big guys get going at the same time, the offense has a chance to be great.

And let’s not overlook his defense. According to, admittedly flawed, defensive metrics, Gonzalez is the best defensive first baseman in baseball in defensive runs saved (12), and second-best to Albert Pujols in UZR/150 (7.7). He was also ranked as the second-best first baseman at digging out throws in the dirt by ESPN baseball insiders Manny Acta, RALPH and Chris Crawford.

Gonzalez is a stabilizing presence in the Dodgers’ lineup. When he’s good, he’s really good. He’s performing well at the time the Dodgers need it most. His best MVP finish is fourth, and I don’t think he’ll finish that high this year. But, I could see him in the back-half of the Top 10. Besides, it’s Clayton Kershaw‘s award to lose.

Dustin Nosler began writing about the Dodgers in July 2009 at his blog, Feelin' Kinda Blue. He co-hosted a weekly podcast with Jared Massey called Dugout Blues. He was a contributor/editor at The Hardball Times and True Blue LA. He graduated from California State University, Sacramento, with his bachelor’s degree in journalism and a minor in digital media. While at CSUS, he worked for the student-run newspaper The State Hornet for three years, culminating with a 1-year term as editor-in-chief. He resides in Stockton, Calif.
@DustinNosler
Previous It’s Good To Have You Back, Matt Kemp
Next Padres @ Dodgers Sept. 8, 2014: Is It October Yet?