Hanley Ramirez, as you hardly need to be told, is terrible at playing defense. Ha ha! Here he is being terrible at defense, just last night:

Not that Roberto Hernandez was going to be good, of course, but that easy ground ball with two outs that didn’t turn into a third out opened up the door to three San Diego runs in that inning alone, including another Ramirez error. I’m not going to show you that. I am going to show you the look Miguel Rojas had on his face after the first error: 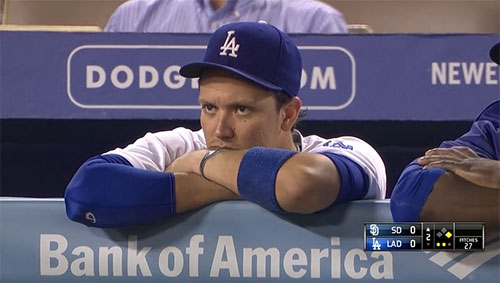 I know the feeling.

It’s not exactly news that Ramirez is a lousy shortstop, of course. The Marlins knew this years ago. Remember when they paired Ramirez with Dan Uggla in the middle infield? Tons of homers, to be sure, but some of the most atrocious defense you can imagine. That’s why they went out and got Jose Reyes in 2012 and attempted to push Ramirez over to third base, which Ramirez unhappily did for half a season before returning to short after being traded to the Dodgers that summer.

In 2013, it must be said, Ramirez was shockingly decent on defense, and whether that’s because he was hoping for a contract extension, hoping to make a good impression in his first full year, healthier than he is now, any of those things, none of them, I do not know. The point is now he’s terrible again — worse, if you can believe the numbers, than Derek Jeter — and he’s already cost Clayton Kershaw what may be his best shot at a perfect game.

Ramirez isn’t going to be a shortstop next year, almost certainly. He might not even be a Dodger next year. But next year is a problem for next year, and the Dodgers have their eyes on a championship right now, so you already know where this is headed, I think.

Can the Dodgers put up with Ramirez at shortstop in October?

That’s the question plenty of fans are asking, either with Ramirez moving to third with Rojas (or Erisbel Arruebarrena, or, lord help us, Justin Turner) at shortstop, or Ramirez moving to the bench with Juan Uribe remaining at third and one of that trio at shortstop. (Just stop it with Alex Guerrero. Stop it. He has zero major league hits, and he’s not a shortstop any more than Ramirez is. Less, probably.)

You understand why. No one wants to see a big October game — and since I’m being presumptuous by assuming the Dodgers are even in the playoffs, let’s also include “big September game against the Giants” in this — thrown or kicked away due to Ramirez’ lousy defense. Since’s not really hitting, either, at just .204/.271/.296 since his return even with four hits on Monday night, the questions get even louder. The fears make sense. It’s not a silly question to ask.

The answer is still “he’s not going anywhere.”

Think about the two alternatives here, for a second.

No. Stop it. This is not happening. It’s just not. No matter how fed up you are with Ramirez’ defense, and no matter how much you think Rojas or Arruebarrena (they’re basically interchangeable for me at the moment) would be an upgrade, Ramirez isn’t headed to the bench. First of all, don’t be silly and worry about a dozen or so games of offensive production. Even with that, even with the injuries, and even with the fact that he (understandably) wasn’t able to replicate 2013’s production, here’s the list of shortstops who are producing more on offense than Ramirez: ____________. That Troy Tulowitzki has been out long enough to fall off the leaderboards helps, of course, but even if not, Ramirez is second best. That is outstanding. You need him in the lineup, especially with Yasiel Puig struggling. This is not a real thing to be talked about.

This would be in theory the more likely solution, and it’s still not happening. First of all, Uribe has been outstanding this year, especially on defense, but he’s also been above average on offense. To move Ramirez over now, with 90% of the season gone, would be asking for disaster. There’s no way such a move would go seamlessly, and that’s not even piling on Ramirez here; it’s just unfair to make that move now, with no practice or transition time. Ramirez would be a huge downgrade from Uribe at third base, and even though you’d get the benefit of Rojas/Arruebarrena at shortstop (I think we’ve seen enough Turner by now to know that we don’t want him there), the downgrade from Uribe’s bat to one of them would be enormous. With how difficult offense has been to come by, that’s not a solution either.

You can say that this situation isn’t tenable next year, and you’re right. You can say that the Dodgers should have solved this a while ago, and perhaps they should have. But for right now, they have the solution in their hands. Ramirez starts and hopefully hits enough in the first eight innings to justify his existence, and then he never, ever, ever is in the game late with a lead. (In the Kershaw no-hitter, the miscue was as much on Don Mattingly for allowing Ramirez to still be in with an 8-0 lead.)

It’s not going to be fun to watch. It hasn’t been fun to watch. But it is the only solution right now, because even if you’re thinking about defense, it’s important to remember that Rojas and Arruebarrena are so, so bad on offense. You might even say they are the Ramirez’ defense equivalent of hitters, except that Ramirez has at least been a decent defender at points in the past. (420 players have at least 100 plate appearances. Arruebarrena hasn’t had enough to qualify, but Rojas has, and he’s worse than 410 of them. Of the ones below him, one is Uggla. Two are former Dodgers, defensive specialists Mark Ellis & Tony Gwynn. Two are backup catchers, Jose Molina & John Baker.)

You can’t, unfortunately, blow up the left side of your infield and part of your lineup in mid-September to get such awful bats into the lineup, especially when that lineup contains the pitcher, the struggling A.J. Ellis, and the ice-cold Puig. It just doesn’t work. So we’ll need to grit our teeth and steel ourselves towards watching the final weeks of Ramirez’ shortstop career. It doesn’t mean that the Dodgers can’t win a championship, anyway. As you might have heard, the Yankees won a few with Jeter.

Mike writes about lots of baseball in lots of places, and right now that place is MLB.com.
@mike_petriello
Previous Padres 6, Dodgers 3: Fauxto’d
Next Carlos Frias could positively impact Dodgers now, in postseason