Jamey Wright is not a great pitcher. He’s been about league average to slightly worse for most of the season. He generally doesn’t see many high leverage situations, mostly relegated to mop-up or long relief. When he does pitch in more important situations, he has been poor. He has a negative clutch score on Fangraphs and he has more meltdowns (causes 6% reduction in win probability) than shutdowns (causes 6% increase in win probability).

Yet, last month, it was reported by mlb.com that Wright would see an “increased role” in the bullpen. That hasn’t really been true in September (just 2.2 innings pitched), though part of the linked article caught my attention:

“We’ve always kind of kept Jamey for length, but he’s kind of worked himself in to the point where it’s not really length, it could be matchup situations from the sixth to the eighth, depending who’s healthy and who’s strong that night,” said Mattingly, who would like to take advantage of the fact that Wright has limited lefties to a .161 average.

Mattingly points out that Wright has a reverse platoon split. I noted as much when the Dodgers signed him. But we can use better measures than the batting average against him this season to demonstrate that. Below are three sets of platoon split data over the past five seasons. None of these measurements are perfect by themselves, but trends among the three can check for tendencies. The first set of data in the table is just raw strikeout rate. The second is platoon FIP (strikeouts, walks, homers). The third is wOBA to get context-free results for the offense Wright allows.

Wright’s strikeout rate is consistently higher against lefties than it is against right-handed batters. Mike noted Wright’s overall upward trend in strikeout rate before the season, but that has not really maintained this year, down against both types of batter. Still, Wright is getting better results against lefties this season, as well as every other year listed on the table.  FIP can be pretty fickle in tiny samples like reliever platoon splits due to HR/FB luck getting pooled, but in four of the five seasons listed (including 2014), Wright’s FIP is indeed better against lefties. wOBA can also be finicky and doesn’t account for things like control of the running game, but like FIP it is better than lefties in every season listed other than 2013.

The issue is, even though that the Dodgers know that Wright is better against left-handed batters, they haven’t been using this information to their advantage. Below is a graph of frequency of pitches thrown to left and right-handed batters by Wright. I’ve included the last three years, so we have two Dodger seasons sandwiching his season with the Rays: 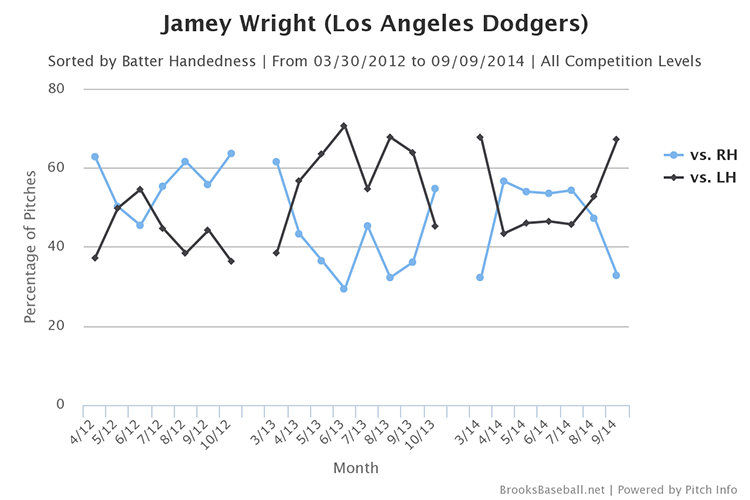 Overall, the Rays seemed to take advantage of Wright’s reverse splits more often. In 2012, the Dodgers had Wright throw 46% of his pitches to lefties. In 2013, the Rays increased that proportion to 62%. This year, back with the Dodgers, it’s back to 49%. The month-to-month breakdown shows that the numbers are moving in the right direction in August and September, so maybe they have rediscovered this split lately, and the timing matches that of the mlb.com article.

Even when accounting for the reverse platoon advantage, Wright isn’t a great relief pitcher. It’s just a way to squeeze in better results against left-handed batters, with J.P. Howell being the only other healthy left-handed reliever. Paco Rodriguez and Onelki Garcia will be back soon, though with both of them (particularly Garcia) it’s pretty hard to know what to expect. Garcia probably doesn’t have any realistic chance of making the postseason roster, but Rodriguez still does. It’s far from a guarantee, so the Dodgers may still need the extra help against left-handed batters.

Overall, Wright isn’t a proper replacement for a LOOGY. But unless Rodriguez or Garcia can prove that they are healthy and effective in the last two weeks of the season, that is how he should be used in the playoffs.

Daniel Brim grew up in the Los Angeles area but doesn't live there anymore. He still watches the Dodgers and writes about them sometimes.
@danielbrim
Previous Starting Andre Ethier over Yasiel Puig is stupid & other things I thought were obvious
Next Swinging At The First Pitch Isn’t Yasiel Puig’s Problem