So, About Clayton Kershaw And Tipping Pitches…

In the aftermath of last night’s disaster, the big question is: Did Clayton Kershaw tip his pitches? Harold Reynolds says yes, but my cat says no, so that sort of cancels each other out. Former pitcher Danny Graves, working for something called 120 Sports, claims that Kershaw was, and he can show you why. You can go click over and watch the video, but since they inexplicably don’t allow embedding, I’ve made a GIF of the pertinent part:

The explanation there is that on the right, when Kershaw is throwing a curve, he shakes his hand a bit, which is what supposedly tipped off the Cardinals to whether a breaking pitch or a fastball is coming. I’ve watched this, and several other supposed examples, a few dozen times, and I can’t see even the slightest evidence of this being true. If it was his pitching hand, then the batter would never be able to see it behind the glove anyway. The runner at second would, but watching the inning again, there’s nothing that indicates any sort of signal to the hitter.

If anything, the “tipping pitches” thing seems to me to be less about drawing conclusions based on evidence and more about attempting to find something, anything, that would explain how the unquestioned best pitcher in the world could suddenly fall apart so quickly. I don’t see tipped pitches. I see what Harry Pavlidis, Brooks Baseball guru, sees:

Which makes a lot of sense. For example: Here’s Kershaw’s horizontal release point last night. Tell me what you think looks different?

Six innings of relative consistency. One inning of a big difference. Ask anyone in baseball what an unexpected changed release point for a pitcher means, and they’ll tell you one of two things — the pitcher is trying to adjust to compensate for injury, or he’s suffering the effects of fatigue. There’s no indication that there’s anything physically wrong with Kershaw, and his velocity didn’t really drop in the seventh, so fatigue, on a stiflingly hot day in Los Angeles, certainly makes sense. There’s something of a misconception that the No. 1 indicator of fatigue is not being able to throw as hard, and while that’s part of it, not hitting your spots like you usually do is certainly connected as well.

Funny story about that. As Harry said, “throwing fat pitches” was an issue, and the metrics back that up. Here’s Kershaw’s “grooved pitches” last night: 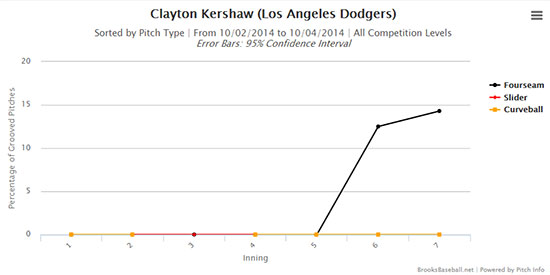 That maybe looks worse than it is, because the vertical scale there is a percentage, not a raw count, so even in the seventh inning, this only accounts for four terrible pitches. Of course, in the first five innings, there were zero. This is a considerable difference. (What’s a “grooved pitch?” Brooks defines it as “pitches thrown in the middle-middle of the plate, regardless of movement or velocity,” so, that’s bad.)

For example, take a look at Yadier Molina‘s plate appearance. The GIF below shows two frames, one as Kershaw delivers, and the second as Molina makes contact. Look at where A.J. Ellis‘ glove is. He’s looking for low and inside. He gets middle, over the plate. Molina takes advantage.

It was also well-noted that Kershaw suddenly started throwing a ton of fastballs, which, yep:

Kershaw’s slider is absolutely deadly. His curveball is absolutely deadly. His fastball is very good, but he’s often used it more to get ahead in the count and subject hitters to those breaking balls of death. In the seventh, that changed. His fastball usage blew up, and I can’t say I know why. Were the effects of fatigue influencing him to throw fewer breaking balls? With an endless string of runners on base, did he and Ellis decide that the risk of a passed ball or wild pitch — obviously greater with breaking pitches — were worth sticking with the lower-risk fastball? I don’t know. Whatever the reason is, something changed.

Hey, maybe the Cardinals really did pick up on something that absolutely no one else could. Good on them, if so, and since the only two hits Kershaw had allowed in the first six innings had been solo homers, the idea that the Cardinals couldn’t take advantage until they finally got a runner on second makes for a tidy narrative. It just doesn’t really fit the evidence, particularly when we have real, actual evidence that a tiring Kershaw changed his release point, changed his pitch selection, and started throwing some ugly pitches to good hitters, which ended poorly for him. It’s unfortunate that none of those liners happened to go right to Juan Uribe or Hanley Ramirez, but that’s the luck of baseball.

To be honest, I wish there was evidence of pitch tipping. That’s easily identifiable and correctable. This doesn’t make me feel better. It might, I suppose, give people an incentive to get on Don Mattingly for leaving him in, but as I said yesterday, I thought Kershaw’s night extended only a single batter too long, with J.P. Howell probably the better choice to face Matt Carpenter. That said, when the best pitcher in baseball is still throwing 95, and the bullpen behind him is weak, it’s not at all hard to understand why Mattingly left him in — and Kershaw did get to two strikes on Carpenter. I’m guessing 90% of managers do the same.

Sometimes, great pitchers get beat. It’s hard to watch. That doesn’t however, mean that we should jump at the easiest narrative that comes along. You don’t need a secret, hidden edge to hit fastballs down the pipe.

Mike writes about lots of baseball in lots of places, and right now that place is MLB.com.
@mike_petriello
Previous Cardinals 10, Dodgers 9: What In The Holy Hell Just Happened
Next Cardinals @ Dodgers Oct. 4, 2014: NLDS Game 2, Lynn vs. Greinke