2014 Dodgers in Review: 2B Darwin Barney

What happened in 2014: Surprisingly useful after mid-season trade

When the Dodgers acquired Darwin Barney on waivers after he was designated for assignment by the Cubs, it was pretty hard to understand what purpose it served, as Mike summarized:

So the real question is, what does this mean for Barney’s role on the Dodgers? No, he’s not coming to take a starting job away from Dee Gordon, or even time from Justin Turner.  Barney is a righty bat who is at least mildly less terrible against lefties (90 wRC+ career) than he is against righties (60 wRC+), so maybe there’s some potential platoon opportunities there, though Gordon has been better against lefties. He’s basically the same hitter — no, really — as Miguel Rojas, which is to say, he’s not much of a hitter at all.

The Dodgers spent a lot of time in 2014 with all-glove no-hit up the middle players (don’t forget that Erisbel Arruebarrena also exists), so Barney’s addition on July 28th was puzzling, especially since he seemed to lack the positional flexibility of the internal options. Barney had the reputation of being an elite glove at second (one of the best in baseball since his debut in 2010) but had extremely limited major league experience elsewhere. Gordon’s emergence and Alex Guerrero‘s return from his ear removal incident made the need for second basemen even more questionable.

The Dodgers did seem to have some semblance of a plan with Barney, though, starting him off in AAA. While in Albuquerque, he played six games at short, three at third base, and three at second. It’s pretty hard to get a good read on how he actually did (he made two errors at third and three at short, but… errors), but that didn’t stop the Dodgers from calling him up on August 10th after Hanley Ramirez headed to the disabled list with an oblique injury.

After the trial in the minors, it was still pretty clear that the Dodgers still viewed Barney as a second baseman. Defensively, he played 61 innings at second compared to just 11 at short. A lot of that playing time was to give a tiring Gordon some days off in September, but if he’s going to stick around beyond this winter the other positions will become a bigger priority.

At least Barney’s glove was as advertised:

Check out the hand wipe before the throw on the second one.

Barney’s biggest surprise contribution was on offense, where he somehow managed a 165 wRC+ after a full career of mediocrity. I don’t have to tell you that it means nothing, and his 2015 Steamer projection is just 71. Not only did he have a surprising amount of power with the Dodgers (though even that only amounted to an ISO of .121), but he had a 17.8% walk rate (and was hit by three pitches) and a low 6.7% strikeout rate. It doesn’t mean anything for next year (also evidenced by the Dodgers leaving him off the playoff roster) but it was still appreciated down the stretch.

Barney’s most memorable contribution on the offense side of the ball, at least to me, was …. whatever this is: 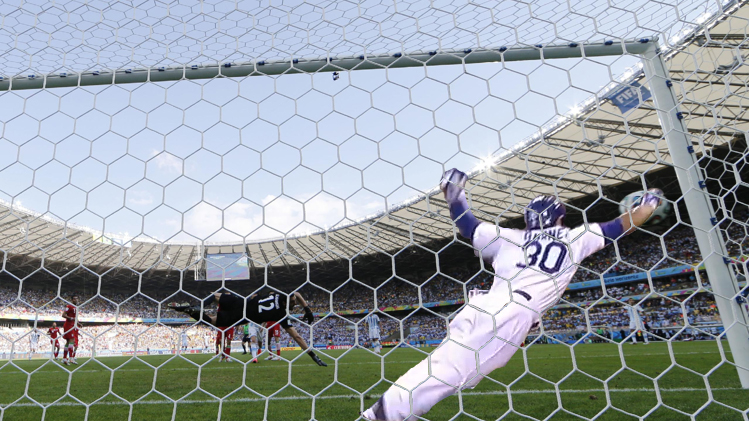 Yes, there are two goalies. No, I don’t care. Apparently he saw this and some of my other terrible photoshops using the same still, and he was a good sport about them. It’s not often than a player existing almost entirely for his defense can entertain like that.

Fitting Barney into a platoon with Gordon wouldn’t be the worst idea in the world if you’re building a team. His strong side of the bat would be more bearable and would cancel out Barney’s elite defense less. But then, what of Guerrero? It’s kind of hard to see how he fits into the puzzle for next year, especially after the Dodgers added Ryan Jackson, who is much cheaper and has similar skills. Still, if he does manage to get a roster spot, I can think of worse options to give it to.

Daniel Brim grew up in the Los Angeles area but doesn't live there anymore. He still watches the Dodgers and writes about them sometimes.
@danielbrim
Previous Regarding the Dodgers interest in Miguel Montero or any other catcher
Next Dodgers Acquire Mike Bolsinger, A Name You’ve Now Heard Of