Let’s Get To Know Chris Hatcher

The headlines of last week’s Marlins-Dodgers-Angels swap aren’t focused on the bit players the Dodgers got back from the Marlins. The main focus on the trade is on Dee Gordon, Howie Kendrick, and Andrew Heaney, and understandably so. But, as we’ve seen in previous posts, the other players received from Miami are pretty interesting, too.

So, let’s get to know Chris Hatcher, the relief pitcher the Dodgers added in the deal. The first thing to know about him is that he wasn’t always a pitcher. Miami initially drafted Hatcher as a college catcher in 2006, but he didn’t hit enough to stay there; he managed just .208/.273/.347 in 476 plate appearances in AA and .160/.323/.300 in 64 plate appearances in AAA. He made the majors briefly in 2010, shortly before Baseball America named him the best defensive catcher in the Marlins’ system.

However, the lack of bat, along with his previous pitching experience in college and his success as an emergency position player pitcher (I love this already) convinced the Marlins to convert him to a full-time pitcher before the 2011 season. He certainly has the arm for it; he averaged over 96 mph with his fastball in 2014. He made the majors the same year as his initial conversion, and was up and down frequently until he finally stuck for most of this year. He rewarded the extra playing time with a break-out season:

To give some context, here is how Hatcher’s 2014 stats would have ranked among the Dodger bullpen (min 40IP):

It’s a pretty easy argument to make that Hatcher would have been the second best pitcher in the Dodger bullpen last season. So, what happened? How did Hatcher improve? The biggest change was in his pitch usage: 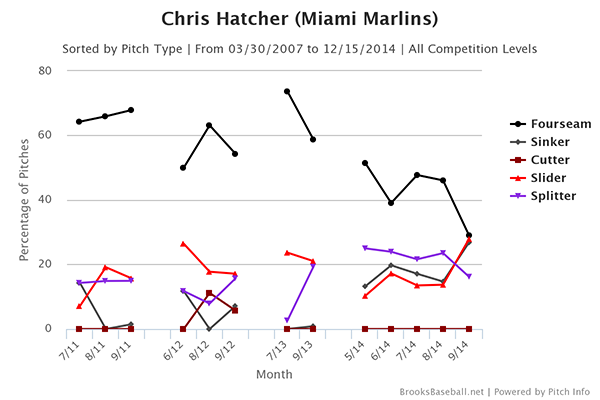 The biggest difference was that Hatcher significantly cut usage of his fastball, mostly in favor of a new sinker. The sinker, like his other pitches, is thrown very hard. It’s also his only pitch which was above average on both whiff % (7.0%, compared to MLB average of 5.8%) and ground ball rate (56%, average 53%). His whiff rate on his fourseam fastball was about the same as the sinker, but the fastball ground ball rate was about 15% lower. So, he substituted for one pitch with an above average version of another pitch. Not bad!

The other huge difference for Hatcher last season was that his slider took a huge step forward: 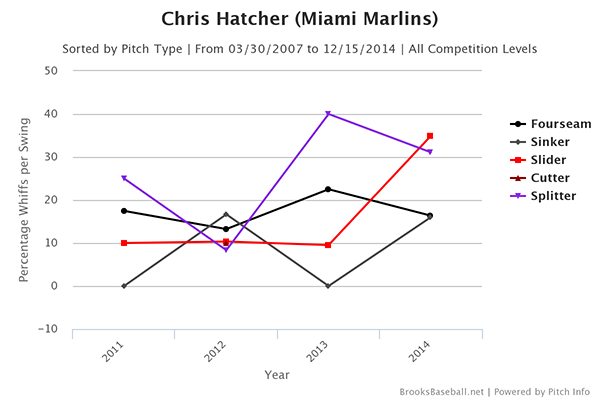 The whiffs per swing rate on his slider more than tripled from where it was in previous seasons. The pitch gained a little bit of velocity but otherwise didn’t have different movement characteristics in 2014, but there was a significant change:

Hatcher stopped throwing his slider right down the middle. Seems like a good strategy! The location shifted to the outside corner to right-handed batters and occasionally to the back foot of left-handed batters. Even with the tripled whiff/swing rate, Hatcher’s slider remained slightly below average for swinging strikes, but when the pitch was put into play it was hit on the ground an astonishing 63% of the time.

Most of this breakout is looking pretty legitimate. A new pitch, and better location on pitches he threw already. It makes sense that Hatcher could still be refining his control in his fourth season of professional pitching, and it worked to great effect last year.

Hatcher’s looking strikeout rate was high during his previous short MLB stints, so this might be a skill. Unfortunately, this data does not seem to exist for minor league numbers. However, even if a certain amount of these plate appearances were to have the opposite outcome (ball added instead of strike added), 18 of the 24 looking strikeouts came on either 0-2 or 1-2 counts. These plate appearances would continue with favorable counts and would generally result in good outcomes later on. Additionally, 15 of the 24 looking strikeouts were on pitches located within the Pitch FX strike zone, and several others were right on the border. There’s probably a bit of fortunate luck here, but not enough to predict a massive regression. Hatcher frequently had strikeout rates in the mid to upper 20% range in the minors, so what he did last season wasn’t totally out of line from his performances against lesser competition.

Hatcher’s biggest problem last season was performance in high leverage situations, evidenced by his poor shutdown to meltdown ratio. A shutdown is defined as an outing in which a relief pitcher increases his team’s chance of winning by 6%, and a meltdown is when the pitcher decreases his team’s chance of winning by the same amount. Most of Hatcher’s context-neutral stats would have been close to the best in the Dodger bullpen in 2014, but his shutdown/meltdown ratio would have been sixth (only beating Jamey Wright).

There’s also this: Hatcher was suspended for five minor league games in May after he was involved in a bar fight with then-teammate Sam Dyson. Details are lacking, but Dyson ended up with a broken jaw, and Hatcher was the only player suspended. Without knowing more it’s hard to cast too much judgement, but it’s a thing that happened.

Chris Hatcher is definitely not without issues, but he doesn’t need to be. He’s not coming in to replace Kenley Jansen. Some of his success in 2015 will depend on his walk rate staying low and not regressing (Steamer forecasts a slight bump to 7.2%, which would have been second-lowest among Dodger relievers last year). Even if he does regress a bit, Hatcher is still a pretty welcome addition to a bullpen which struggled so much last year. Given what he did last season, he could start 2015 as a set-up man, though it might be better to use him earlier. Either way, it’s hard not to be a fan of this acquisition.

Daniel Brim grew up in the Los Angeles area but doesn't live there anymore. He still watches the Dodgers and writes about them sometimes.
@danielbrim
Previous Dodgers Finally, Finally Complete Matt Kemp Trade
Next Brian Wilson released by Dodgers after unsurprising lack of interest