The Dodgers are apparently set to sign former White Sox and Blue Jays’ reliever Sergio Santos to a minor-league deal. It promises to be chock-full of incentives and a “has to be on the active roster by insert date here,” but that’s perfectly OK. Unless he has $10 million in incentives (which he won’t), there is almost no risk to this deal, and it could pay big dividends.

Then again, he’s been generally terrible and hurt for the last three years in Toronto, so this is just another lottery ticket purchased by the Dodgers’ new front office.

Before we touch more on Santos the pitcher, let’s look back at Santos the infield prospect for the Diamondbacks.

Santos, 31, was drafted in the first round of the 2002 MLB Draft. He was drafted out Mater Dei High School in Santa Ana, so he’s a local fella. He ranked in the D-Backs’ top prospects list (Baseball America) four times, including a ranking as high as No. 2 in 2003. After toiling in the minors as a light-hitting (.248/.305/.393 in 3,145 plate appearances), bad fielding shortstop, latching on with the Twins, Giants and White Sox, he was converted to the mound, where he found his calling in the game.

Santos would be the ChiSox’s closer in 2011, and was really good (save the 4.1 BB/9): 3.55 ERA, 2.87 FIP and a sparkling 13.1 K/9 in 63 1/3 innings. His 1.5 WAR was good for 18th-best among all relievers in the game that season. Prior to the 2012 season — and somewhat surprisingly — he was dealt to Toronto, where he was up-and-down and hurt, before being really down. Before being dealt, he signed a 3-year, $8.25 million contract extension with Chicago in an attempt to buy out his arbitration years. The deal obviously backfired and the Blue Jays paid him a $750,000 buyout in November.

What hampered him in Toronto was the shoulder injury he suffered in July 2012. Santos has yet to regain the form he once had while in Chicago. It really hasn’t cost much in the way of velocity, but his command has suffered mightily. He had never been much of a control/command guy to begin with, so a shoulder injury is going to impact his ability to command his pitches even more. Shoulder injuries are generally more worrisome and more difficult to come back from than elbow injuries, and Santos is on that path as we speak.

He was unspeakably bad in Toronto last season, posting a 8.57 ERA in 21 innings. He struck out 29 batters, but couldn’t do much else. If he’s to earn a spot in the Dodgers’ bullpen, he’ll have to drastically improve his command. With near-elite velocity and a hard, biting slider, he has all the makings of a nice back-end option in the bullpen.

Santos has a fastball that has averaged 95.2 MPH in his career, but that number has trended down every season of his MLB career. He also throws his slider and changeup in the mid-80s. As you can see by the chart, he’s started to rely more heavily on his slider the last couple of (injury-recovery) seasons. 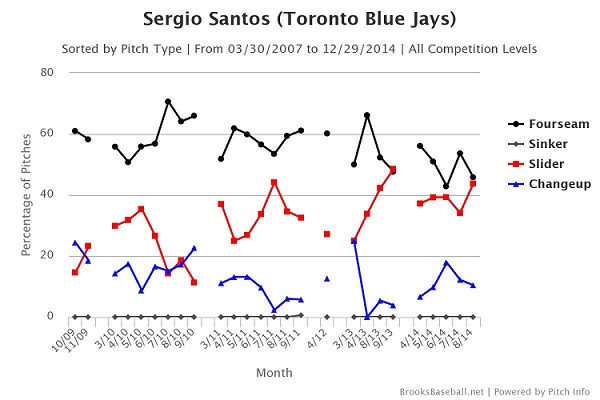 If you look back to 2011, he had much more success when he threw his fastball almost twice as much as his slider. While the pitch didn’t have great value (just +5.1 runs above average — good, not great), it gave hitters a different look and didn’t allow them to sit on his slider. With that velocity, he should be trusting his fastball — provided he can find the fringy command he had before his shoulder injury. And his career whiff rate with his slider is 58.24 percent, so it’s easy to see why he throws it as much as he does.

Just look at the sharp break on some of these sliders.

When he snaps it off right, that’s a plus-plus-slider. Even when he doesn’t, it still flashes that potential. Couple that with a mid-90s heater (even one that sits in the 92-94 MPH range) and that’s a really good combination.

The risk of this signing is so minimal that I’m not sure how one could argue against it. If Santos figures it out — or the Dodger coaching staff sees something correctable — then this could be a hell of a signing for the Dodgers. If Santos doesn’t figure it out, it’s no big deal.

Dustin Nosler began writing about the Dodgers in July 2009 at his blog, Feelin' Kinda Blue. He co-hosted a weekly podcast with Jared Massey called Dugout Blues. He was a contributor/editor at The Hardball Times and True Blue LA. He graduated from California State University, Sacramento, with his bachelor’s degree in journalism and a minor in digital media. While at CSUS, he worked for the student-run newspaper The State Hornet for three years, culminating with a 1-year term as editor-in-chief. He resides in Stockton, Calif.
@DustinNosler
Previous Podcast: ‘Dugout Blues’ episode 106 – Anderson, Wilson, future moves
Next 2014 Dodgers In Review: RP Chris Withrow