What Happened In 2014: That could have gone better.

When the Dodgers traded for Roberto Hernandez, Andrew Grant posted this tweet:

At the same time, the front office was also hinting that they had a replacement in the works for the recently-injured Paul Maholm, and they took it literally. Maholm couldn’t miss bats, and neither could his “replacement.”

Two days later, Kevin Correia was a Dodger. When writing up the transaction (titled “Dodgers acquire Kevin Correia for some reason”), I wasn’t exactly enthused: 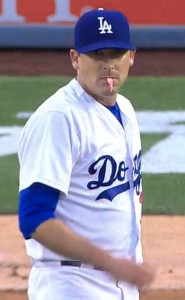 This move, moreso than the last pitching depth move, seems like an unnecessary grab of a veteran. Unless Haren is injured, Correia provides little utility over what the Dodgers have, even if Josh Beckett is indeed out for the year. Even so, the drawback isn’t clear either, so the immediate response is probably just “meh.” Hopefully he doesn’t screw things up too badly.

So, about that downside. Correia’s peripherals were actually a bit better as a Dodger than as a Twin (his xFIP- was 104 with the Dodgers, very close to league average). But, there were dingers. So many dingers. As a Dodger, Correia allowed 24 fly balls. Nearly 1/3 of them (seven) went over the outfield fence.

Correia’s first start actually went well (4H, 1R, 6IP), but after that… well, here’s a list of his other outings:

Correia ended up in several high leverage situations in extra innings after the Dodgers ran out of other relievers. His Win Probability Added in 24.2 innings was -1.74. We list FIP-based WAR on the table, but his RA9 WAR, thanks to a RA9 of 10.22, was -1.7. Correia was unsurprisingly left off of the playoff roster.

Luckily, even though Correia was just as bad as any pitcher can be in such a short time, the Dodgers won the division handily. With a better pitcher, maybe the Dodgers would have been able to secure the number one seed in the National League, but Correia’s contribution wasn’t poor enough to say that he cost the Dodgers that position by himself.

On November 8th, the Dodgers traded cash to the Twins to complete the deal. Hopefully it wasn’t much. Correia was Ned Colletti’s last trade of any significance, and it was a pretty good summary of one of his bad habits: pointlessly acquiring veterans. That won’t be missed.

2015 status: It wouldn’t be surprising if Correia got a deal somewhere, but he might be at the stage of his career where he needs to accept an NRI.

Daniel Brim grew up in the Los Angeles area but doesn't live there anymore. He still watches the Dodgers and writes about them sometimes.
@danielbrim
Previous 2014 Dodgers In Review: RP Brandon League
Next Mailbag #17: Billingsley, Right-Handed Power, Third Base, Mattingly As Furniture