If there’s a single great surprise of the Dodger offseason, it’s easily the fact that as the team heads to Arizona to break camp, Andre Ethier is still wearing blue. Even after Matt Kemp was traded to San Diego, Ethier’s departure seemed to be a given. After all, Carl Crawford and Scott Van Slyke make for a tidy pair in left, Yasiel Puig owns right, and if Joc Pederson can’t handle center, well, that’s why Chris Heisey is around, or maybe how you get Van Slyke and/or Alex Guerrero more playing time in a corner if Puig were to shift back to center.

Yet Ethier remains, and while there’s an argument that having a versatile veteran around isn’t the worst thing in the world if Pederson struggles, there’s also a considerable amount of worry about how that can actually work. As a lefty, Ethier isn’t a platoon option in left or center, and Puig doesn’t need one in right. As a teammate, Ethier did a great job putting his personal feelings aside last year, but didn’t seem eager to do it again.

I bring this up now for two reasons. The first is because I had a Twitter discussion recently with a follower who was convinced that Ethier’s lousy 2014 was due in large part to the circumstances that found Ethier less than a full-time player, and it’s an understandable position. Ethier got 380 plate appearances, the first time in his career that he’d had fewer than 400, and at times his absences from the lineup became a running joke. It couldn’t have been an easy transition.

That’s related to the second item, which comes to us via Nick Cafardo of the Boston Globe last weekend:

As one of Ethier’s former coaches told me recently, “He’s a guy who has to play a lot to get into a rhythm. If he doesn’t, like last season, he’s not going to produce. The more he hits against lefties, the more comfortable he gets against them. He needs to be an everyday player.”

So maybe there’s truth to that. Maybe some guys are wired to come off the bench, and others need a routine. These guys are human. I guess we can’t discount that entirely. None of that aligns with the fact that Ethier basically was the starter in center for two solid months between Kemp’s departure in late May and Puig’s arrival in late July and hit only .236/.301/.379 while doing it, but okay, fine.

The problem with that is… well, hang on. The first problem is that a former employee of the Dodgers actually thinks that Ethier needs more playing time against lefties, as though it hasn’t been so conclusively proven for years that hitting lefty pitching is a skill Ethier simply does not have, to the point that I’m not even going to bother to bust out numbers here. You know this. I know this. Ethier probably knows this. If anything, I’d love to know who Cafardo was talking to. Larry Bowa? Jeff Pentland? Trey Hillman? Dave Hansen? Who knows. Whoever it is, I’m glad they’re a former coach.

The Dodgers most certainly know this as well, but that’s sort of the real problem here. For years, I’d begged the Dodgers to platoon Ethier. Don Mattingly slowly began doing so in 2013, and really committed to it in 2014. The expectation was that with fewer automatic outs against lefties, Ethier could do exactly what he’d always done against righties and merely look better by virtue of selective usage. Unfortunately, that didn’t happen, as the below chart that shows two otherwise unrelated numbers shows: 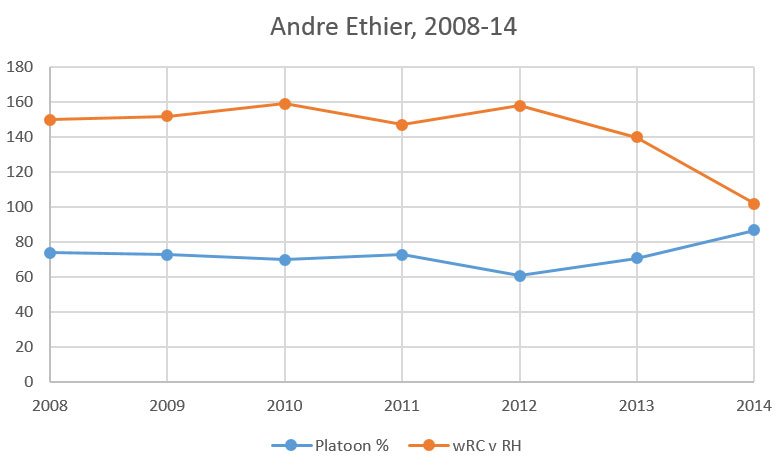 Ethier had the platoon advantage a career-high 87% of the time, which is to say that 329 of the 380 plate appearances came against a righty. That should have been a great thing. It wasn’t. He had a career-worst wRC+ against righties. In 2013, he had his second-worst wRC+ against righties. These two lines really should be moving in concert with one another, not careening towards one another. Ethier never hit lefties, and now he’s seeing fewer of them, except he’s not hitting righties either. That’s, uh, bad.

One might say we’re seeing the start of Ethier’s decline, except that in a very real way, we’ve been seeing that for a while: 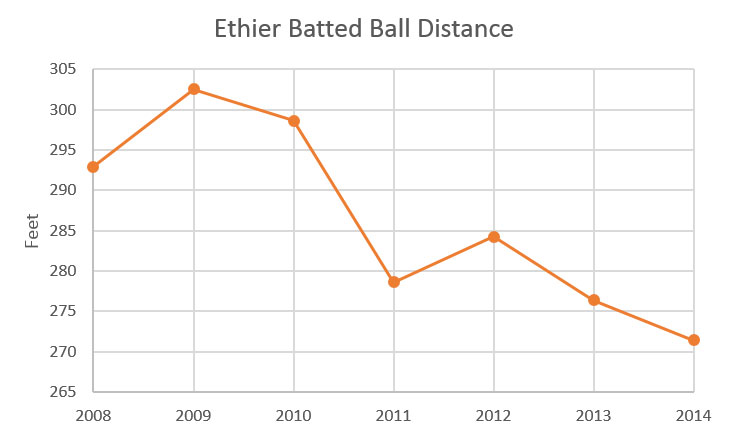 This is what you call “a trend.” Ever since Ethier hit 54 homers in 2009-10, he simply hasn’t been hitting the ball as hard or as far, and it’s been a long time since it was just “a bad year.” I think it’s been pretty clear to everyone for a while that Ethier was post-peak, but at least for a couple of years it looked like a soft decline, helped by above-average BABIP and a decent eye in the zone. There comes a point, though, where you can only decline so much before you fall apart, and that’s without even noting that he suddenly started hitting a crazy amount of grounders last year without any noticable change in his plate approach stats.

I think the impulse is to look at a 98 wRC+ after years in the 120 range and say, well, everyone gets a bad year. The problem is that it’s not like this was the first indication of trouble, and it’s rare that age 33 and without a clear path to playing time is generally the way that downward trends get reversed. Steamer at least sees a bounce to a 108 wRC+; ZiPS slightly less than that. I’m not sure I’m as optimistic. For a backup outfielder, maybe that’s good enough. Then again, most backup outfielders are pluses either on the bases or on defense and aren’t openly unhappy about being a backup outfielder.

Maybe there’s still a trade to be made if another team loses an outfielder to injury. Maybe having Ethier around is a reasonably decent safety net. And maybe there’s still many, many millions of dollars headed to an aging outfielder who appears to have completely lost his game. That’s not a great scenario, is it?

Mike writes about lots of baseball in lots of places, and right now that place is MLB.com.
@mike_petriello
Previous Can the Dodgers sign both Hector Olivera and Yoan Moncada?
Next Zack Greinke Gets An Elbow Injection, Which Sounds Terrifying