Who is David Huff and why is he going to break camp with the Dodgers?

When the Dodgers signed David Huff to a minor-league deal, not a lot was expected. He was a journeyman relief pitcher with some success in the majors, but not a lot of it.

Aside from his awesome specs, Huff, 30, has performed well in spring training, and with Hyun-Jin Ryu and Brandon League set to begin the season on the disabled list, there better than a coin flip’s chance Huff — not Sergio Santos (who has a May 1 opt-out) or another non-roster invitee — makes the team out of spring training.

The Dodgers are going to be short a starting pitcher for awhile, and it seems unlikely they’d go into the season without a long man out of the bullpen. While long men are increasingly rare in today’s game, the Dodgers don’t have a lot of guys in the bullpen who can pitch — effectively — for more than an inning or two. Juan Nicasio has starting experience, but he’s been ticketed for short relief since the Dodgers traded for him. Dustin McGowan is a former starter, but he’s been a much better reliever in his career (and isn’t even a sure lock to break camp with the team).

Other than those two (and some early career starts from J.P. Howell), no one in the Dodgers’ bullpen has MLB starting experience. They could opt to keep a guy like Mike Bolsinger, Carlos Frias, Zach Lee or Joe Wieland, but my guess is they want those guys to work on pitching out of the rotation, even if it is in the minors. This makes Huff the odds-on favorite to fill the role in my eyes.

Mark Saxon touched on the Dodgers and the potential of three lefties in the bullpen to start the season. This nugget was interesting and somewhat telling.

“Huff apparently feels secure enough in his standing that he can tinker with pitches while being evaluated. He said he threw five straight changeups to Angels designated hitter C.J. Cron, the final one rocketing off the left-field wall. He said he wouldn’t have done such a thing in a regular-season game.

‘They’ve seen all spring what I’m doing. I’ve shown them everything I could possibly show them,’ Huff said. ‘They’ve put me in different situations. I’ve done pretty well with each one that they put me in, so I think it’s just a matter of showing them I’m trying to refine some things.'”

His versatility could land him a big-league bullpen spot come April 6. Huff has started 54 of his 115 career appearances, but has made just six of them since 2012. Unless things go wrong, Huff wouldn’t be starting many games. His role would be mostly to step in if a starter falters and can’t make it through four or five innings. 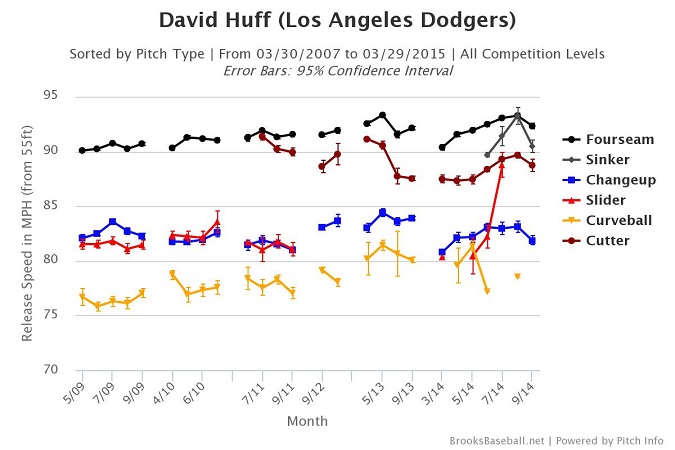 What isn’t surprising is Huff’s velocity increased since his move to the bullpen. As a starter, he sat in the 90-91 MPH range, but as a reliever, that velocity has ticked up to 92-93 MPH. 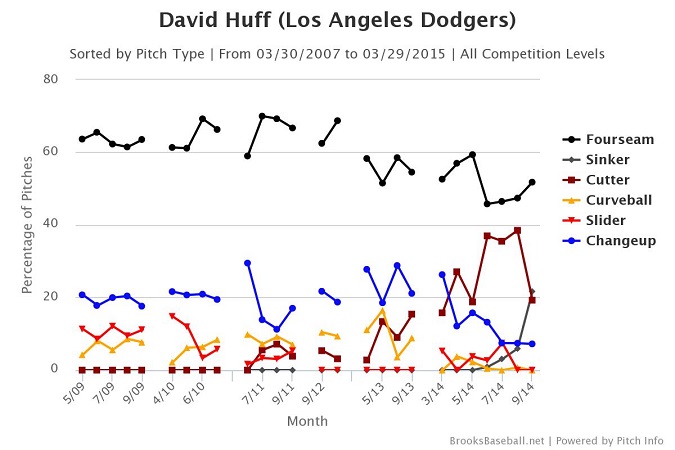 He has also stopped throwing his fastball as much and focused more on his sinker and cutter. Because of that, and his changeup, left-handers (.300/.366/.474) have actually hit him better in his career than right-handers (.278/.329/.462). The numbers aren’t pretty, but this seems to be a case of “What have you done for me lately?” Lately, Huff has 12 innings pitched in spring training with a 1.50 ERA (‘tevs).

Don’t expect him to strike out many hitters, as he owns a 5.3 K/9 in his career, and has just four strikeouts in 12 innings this spring. He’s improved his strikeout rate from 4.9 as a starter to 6.5 as a reliever.

I identified Huff as a potential guy who could break camp with the team.

“Huff pitched in the majors — better than you’d expect from an NRI — last season with the Yankees and Giants. He had a 3.36 ERA, 4.13 FIP and a not-terrible 3.5 walks per nine innings.”

“If I had to bet on any of these guys breaking camp with the team, I’d go with the following (in order)

Huff strictly because he’s a left-hander with recent MLB experience.”

Not the greatest of reasons, but far from the worst. Huff has a two opt-outs — May 1 and June 5 — so it isn’t imperative the Dodgers add him to the 40-man roster right now, but it seems like the most efficient way to get the most out of him and his skill set.

Whatever happens, it’s highly unlikely Huff will end the season with the team, and the Dodgers do have other options. But, Don Mattingly seems to like him and that could be enough for him to make the team come April 6.

Dustin Nosler began writing about the Dodgers in July 2009 at his blog, Feelin' Kinda Blue. He co-hosted a weekly podcast with Jared Massey called Dugout Blues. He was a contributor/editor at The Hardball Times and True Blue LA. He graduated from California State University, Sacramento, with his bachelor’s degree in journalism and a minor in digital media. While at CSUS, he worked for the student-run newspaper The State Hornet for three years, culminating with a 1-year term as editor-in-chief. He resides in Stockton, Calif.
@DustinNosler
Previous Yet Another Tough Spring Training For Zack Greinke
Next One Week To Go, Who Makes It To Opening Day?