Yimi Garcia, Up the Ladder

When Yimi Garcia was a prospect, his standout pitch was a “high spin” fastball. In December of 2013, Chad noted a public Trackman report on the pitch. Trackman is a radar-based system used to measure pitch spins more accurately than Pitch FX can, but it is generally unavailable to the public. Chad notes Garcia’s numbers:

Koji Uehara is cited as a prime example of a high-spin fastball benefiting his swing-and-miss stuff with mediocre velocity, and he’s at 2427 RPM, which is quite a bit more than the 2200 RPM league average. That now takes us back to Yimi Garcia, because while in the AFL, Trackman had his fastballs at 2504 RPM. That’s promising.

Pitch FX can’t measure spin rate directly, but the total break of a pitch can be used as a substitute in a pinch. For fastballs, a high spin generally results in a large amount of vertical break, though it can also result in higher run. On Pitch FX, a departure from 0 break is considered “spin,” since a pitch that moves 0 inches in each direction is a theoretically spinless ball. High amounts of vertical break generally results in a “rising” fastball, while lower than average vertical breaks are generally called “heavy” fastballs. High-spin fastballs rise, and that’s what Garcia showed in the minors. 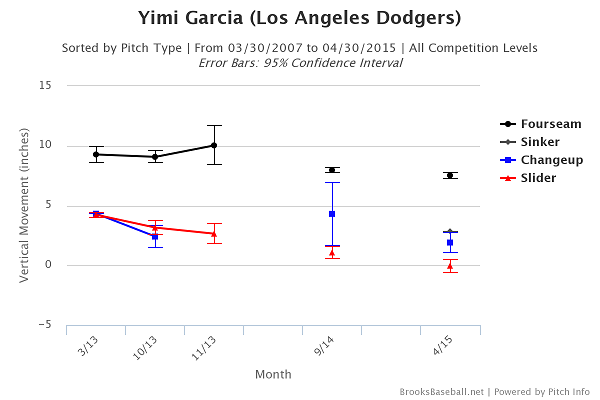 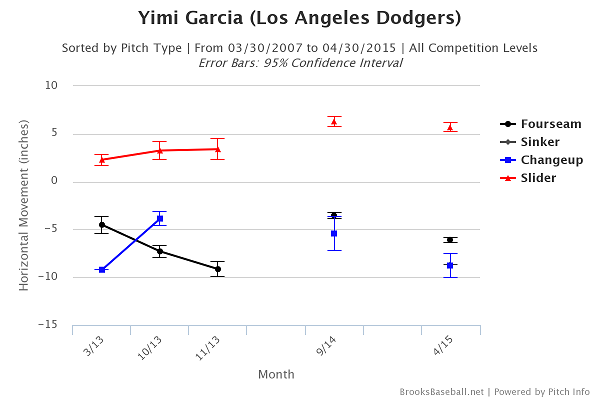 On both charts, Garcia’s movement has considerably reduced since that Trackman report, which was one of the most promising things about him as a prospect.

In 2014, the average fastball (among pitchers with at least 200 thrown) had 4.79″ of horizontal break and 9.21″ of vertical break. Garcia’s fastball in 2015 has averaged 6.09″ of horizontal break and 7.52″ of vertical break. Garcia’s fastball actually “sinks” more than the average fastball now, by more than a standard deviation. The pitch is running more than the league average, but by less than a standard deviation. The total movement compared to a theoretically spinless ball (x=0, y=0) is less than the league average as well. The movement on Garcia’s fastball during the 10/13 measurement period would have been the second highest in baseball last year, out of 344 pitchers (one spot ahead of Uehara, mentioned in the quote above). The average movement on Garcia’s fastball so far in 2015 would have been 275th.

Despite all of this, Garcia is obviously doing better than most thought he was capable of. In the first month of his rookie season, all he’s been is one of the best relievers in baseball. His 0.77 ERA would normally be ignored, but it’s backed up with a 0.69 FIP. Garcia has compiled 0.6 fWAR so far in the young season, which is second among major league relievers and is just 0.1 less than what Clayton Kershaw and Zack Greinke have done as starters. Kenley who?

So, how has he been so good, with a fundamentally different main pitch than what we were expecting? Well, throwing the fastball 2mph faster than he was as a prospect certainly helps. Swinging strike rate doesn’t correlate to total fastball movement (r^2=0.01) either. There could also be something missing in the Pitch FX data which Trackman would see. StatCast records spin rate directly like Trackman, so hopefully we’ll have a better idea on what happened to the spin eventually.

Garcia used to have a rising fastball, and now he does not. The most interesting part about his breakout this year is that he’s still pitching like the break on his fastball did not change. Usually, heavy fastballs are targeted at the bottom of the zone, and rising fastball stars (like Uehara) target the top. Not so with Yimi:

Or, in data form. First, a heatmap of Garcia’s pitches this year, via Baseball Savant: 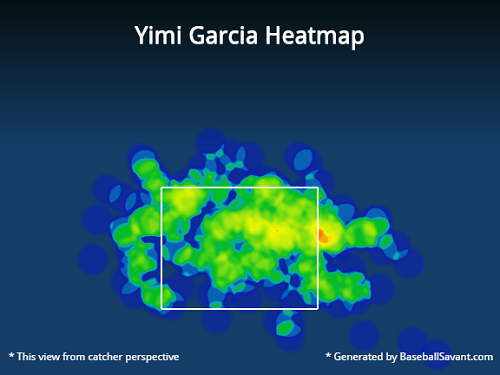 He’s living well above the knees.

Second, a map of Garcia’s swinging strikes this season: 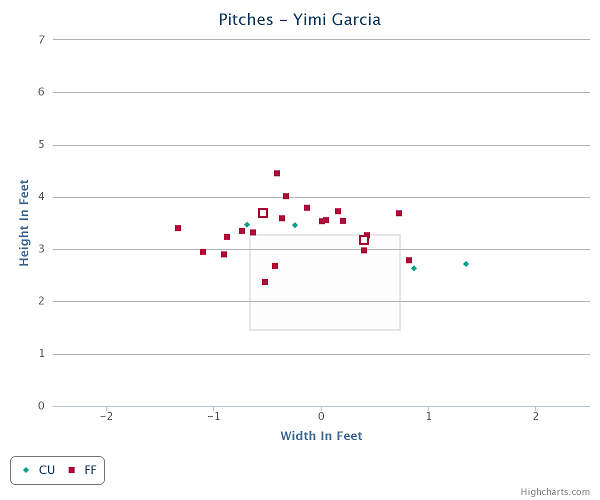 Look at all of those high fastballs! They’re working. Garcia is currently third in all of baseball in fourseam fastball swinging strike rate (50 required), at 20.8%. The two pitchers ahead of him are Aroldis Chapman (obviously) at 22.3% and Antonio Bastardo (not as obviously) at 21.3%. No other pitchers are above 20%, and the league average is 8.4%. Garcia is 2.75 standard deviations above that average (which, in non-nerd terms, is really good).

The point of all of these words, numbers, charts, GIFs and graphs might be easier to get across when summarized into one sentence: Yimi Garcia throws his fastball at just under 94mph, but batters are swinging through it like he’s throwing 100.

Referring back to the swinging strike rate chart above, you can also see that Garcia is only getting those whiffs at pitches above the belt. The lowest whiff Garcia induced was 2.37 feet off the ground, and that was the only one below 2.5 feet. 18 of Garcia’s 26 whiffs this year have been on pitches 3 feet off the ground or more. Those numbers don’t sound meaningful until compared to the rest of the pitchers in baseball:

All top 10, showing just how unique his fastball has been so far.

I’ve spent the whole post talking about Garcia’s fastball, and for a good reason. He throws it 73% of the time. His slider is his other main pitch, and that’s where things get weird. On the whiff chart above, the blue dots are sliders (mislabeled as curves by pitch fx). All of them are also high. It seems like changing eye levels with the slider might be a good recipe for success, but so far it hasn’t worked that way. Here’s what the slider has looked like in action:

Garcia has thrown a few low sliders, but so far they’ve mostly frozen the batter. 2/3 of Garcia’s sliders have been taken, mostly for balls. Elevating the slider could be dangerous, but everything has been working so far.

So, what does all of this mean? Obviously, it’s early. Garcia allows a lot of fly balls, and eventually a few will go out of the park (especially given his love for high sliders). Even after adjusting for HR/FB, Garcia’s xFIP is under two. It’s hard to use Garcia’s track record as a prospect as a guide, too. He’s not throwing the same pitches. So far, it’s hard to argue with the eye test, and it will be exciting to see how much of it can continue.

Daniel Brim grew up in the Los Angeles area but doesn't live there anymore. He still watches the Dodgers and writes about them sometimes.
@danielbrim
Previous Forget right-handed power, the Dodgers have tons of left-handed power
Next Diamondbacks @ Dodgers May 1, 2015: Carlos Frias in Game 22, as expected