Hatcher has been one of the more polarizing players on the 2015 Dodgers’ roster, and he really isn’t as bad as his ERA makes him out to be, but he hasn’t been as good as his FIP would lead you to believe.

According to FanGraphs, his pitch values are -1.4 on his fastball, -2.0 on his slider and 0.6 on his split-finger fastball that is misclassified as a changeup. He throws those pitches 70.4 percent, 11.2 percent and 18.4 percent of the time, respectively. The biggest difference from last year is that he’s throwing his fastball more and his off-speed stuff less. Because of this, his command would need to be spot-on, and it hasn’t been this season.

Sure, he has an average-to-above-average 7.1 percent walk rate (3.1 BB/9), but he hasn’t been able to place his pitches where he wants. The cause of that would seem to be an inconsistent release point. 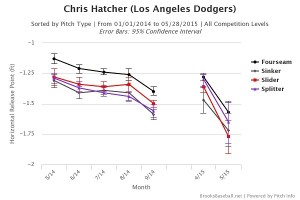 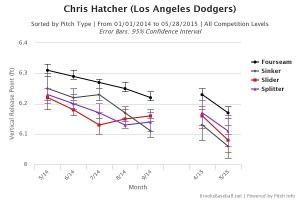 As you can see, his release point has shifted horizontally and dipped vertically from even last month, but even more so from last season (when he was really good). His delivery isn’t such that it should be hard to repeat it, but he is definitely out of sorts with it so far this season. When a release point is inconsistent, the pitcher’s mechanics are not clean and he’s liable to open up his front half and begin to miss the intended target. Both release points are significantly off from last season, and Rick Honeycutt and Co., have some work to do. That work will have to come in the majors as Hatcher is out of options and cannot be sent to the minors without clearing waivers. There is a 0 percent chance he would, so no matter what a caller on a certain Dodger postgame radio show might say about sending Hatcher to the minors (“I don’t care if he doesn’t have options“), it will not happen.

He’s also elevating his pitches a bit more than last season, which is usually OK for a guy with high velocity. But for Hatcher, it isn’t working this season.

Everything else seems to check out, so this is these are the only things I could figure out that could be impacting his performance negatively — and make no mistake, these are significant issues. And no, it isn’t the “pressure” of pitching in the late innings.

He’s missing plenty of bats, as his whiff percentage is actually better on his fastball than it was last season, but he’s getting fewer on his slider (18 pitches) compared to last month and none on his sinker (11 pitches) and splitter this month (13 pitches). 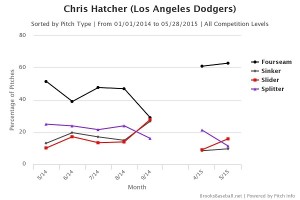 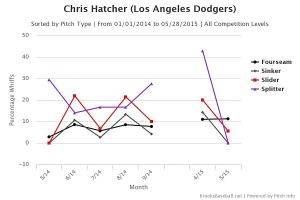 When he induces swings, he misses bats. When contact is made, it’s weak. Yet, he’s still having little success overall.

This is all really odd on some level because Hatcher is one of the best pitchers in the game at limiting hard contact by opposing batters. His average exit velocity on hits is just 85.34 MPH, fourth-lowest in baseball. He has been bitten by the BABIP monster, as he owns a .400 batting average on balls in play this season. That’s completely unsustainable and some of those bloops and bleeders will start finding gloves — that is, once he stops missing in the fat part of the strike zone with his pitches. 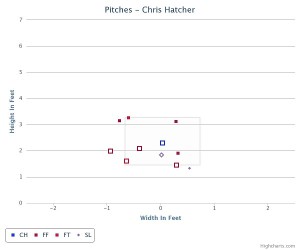 He also has the worst strand rate (LOB percentage) in baseball (minimum 50 IP) in the last three seasons at 58.8 percent. As a wise person (Daniel, probably) said, that’s what happens when one has a .625 BABIP with runners in scoring position. That is absurdly unsustainable and will normalize.

The bottom line is, Hatcher is struggling with his command. That is the main reason he is struggling this season (even though he has still been worth almost half a win). But he isn’t struggling as much as some would have you believe. But he isn’t anywhere near as lights-out as he was in 2014 with the Marlins. Given some time and some (hopefully) extra work with Honeycutt and guys, Hatcher would figure out his command issues. Until that time, he should probably see fewer high-leverage situations. With Pedro Baez out, that’s going to be a bit tougher (did I just type that?). But guys like Yimi Garcia, who seems to be through his rough stretch of a few weeks ago, Adam Liberatore giving Don Mattingly more confidence and that Kenley Jansen guy back, it might not be as difficult as it seems. If Hatcher can figure things out, he would make an already good Dodger bullpen that much better.

Big thanks, as usual, to Brooks Baseball and Baseball Savant for the data and garphs.

Dustin Nosler began writing about the Dodgers in July 2009 at his blog, Feelin' Kinda Blue. He co-hosted a weekly podcast with Jared Massey called Dugout Blues. He was a contributor/editor at The Hardball Times and True Blue LA. He graduated from California State University, Sacramento, with his bachelor’s degree in journalism and a minor in digital media. While at CSUS, he worked for the student-run newspaper The State Hornet for three years, culminating with a 1-year term as editor-in-chief. He resides in Stockton, Calif.
@DustinNosler
Previous So Andre Ethier Is Good Again, Apparently
Next Dodgers @ Cardinals, May 29: Back In St. Louis