Has Anyone Noticed That Jimmy Rollins Is Hitting The Ball Again?

Jimmy Rollins hasn’t had an easy go of it in his first, and likely only, season as a Dodger. I mean, we’ve been talking about his struggles constantly. (Here, here, here, and here.) Because the Dodgers just so happen to have Corey Seager, arguably baseball’s top prospect (to be fair, in part because seemingly every other prospect has already been recalled) playing the same position right behind him, change has long seemed inevitable.

Hasn’t happened, though, in part because Seager has been fine in nearly 400 plate appearances since he was promoted to Triple-A, but not dominant. (.278/.332/.427, 100 wRC+). With Joc Pederson‘s struggles, you understand the reluctance to have two rookie players at important up-the-middle spots, and the way this roster is constructed, Rollins couldn’t really be benched. He’d have to be removed entirely, and that loses any safety net for Seager. So a move never happened, and fans kept happily grumbling about Rollins and his admittedly-poor .225/.278/.365 line, and…

…and has anyone noticed that Rollins has been really very good for a while now? It probably says a lot about how brutal the start of his season was that we’re about to point out his rebound and his line is still that bad, because, yeah, it was bad. But check out the last two months:

In the second half, Rollins has the eighth-best wRC+ among shortstops. What’s changed? This sure looks good: 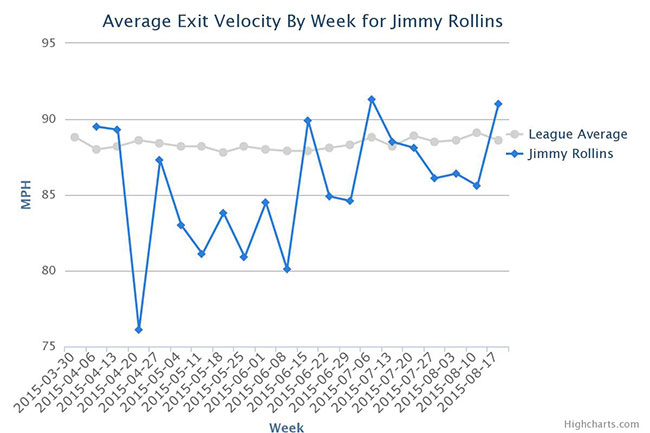 In August, you could argue that it ‘s been good BABIP luck, but not in July, which was entirely about power. A month ago, Chad talked about Rollins trying to use the entire field. Maybe this is the result of a new approach. This post really isn’t intended to be a Brim-esque deep dive into exactly how Rollins has turned it around. It is, for now, just an acknowledgement of something good that’s happening. It’s been a bad year for Rollins. It’s been better for nearly two months. If you want hope, there’s hope.

Mike writes about lots of baseball in lots of places, and right now that place is MLB.com.
@mike_petriello
Previous Now Is Not The Time To Give Up On Joc Pederson
Next Dodgers @ Astros August 21, 2015: Utley Utley Utley