Following a Team Closely, From Very Far Away 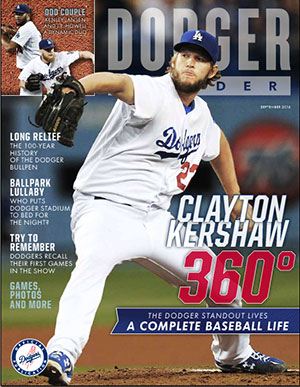 There’s been a lot of great Dodger baseball over the last week. Or so I’m told. The 5-4 win over San Francisco to kick off that series sweep lasted 14 innings and ended somewhere around 3 am Eastern time. Every game since Jake Arrieta‘s no-hitter has been a traditional night start on the West coast. It means I haven’t been able to see a lot of the late innings of some of the year’s bigger games.

Which is fine, you know. I mean it’s tough too, but there’s actually a ton of things that are pretty decent about following a western team from the east. Now, I’d tell you what they were, but I already did that, in the September issues of Dodger Insider magazine, run by our friend Jon Weisman. This month’s issue includes me trying to rationalize the good things about being 3,000 miles away from the ballpark, even though none of it is quite the same as being actually in the seats. (One item that didn’t make it: Not being at the park means more Vin Scully to listen to!)

In all, there are more than two dozen stories in Dodger Insider magazine, plus all the usual great photos, games, tidbits and more. For $5 at the ballpark, it’s a bargain.

And it is! That’s true. You should get it next time you’re at the park, and really the fact that I have an article that includes a picture of my feet in it (this is real) is probably the least-interesting thing, because:

September also presents a package of pieces on the Dodger bullpen — but don’t be nervous. There’s a fun feature on the unique, odd-couple relationship between Kenley Jansen and J.P. Howell, plus a 100-year history of the Dodger relief corps. Another story you should enjoy, written by Mark Langill, is what happens at Dodger Stadium after the final out to tuck our beloved ballpark in at night.

So, yeah. It’s always fun writing for this magazine, and more than worth your time. Enjoy.

Mike writes about lots of baseball in lots of places, and right now that place is MLB.com.
@mike_petriello
Previous Dodgers 8, Padres 4: #TooManyHomers
Next Dodgers @ Padres Sept. 5, 2015: Running game has improved