Scott Schebler has a future in the majors, with or without the Dodgers

For all the love and fanfare Joc Pederson and now Corey Seager have received, Scott Schebler has flown under the radar. That’s kind of hard to believe, seeing as he was the Dodgers’ minor league Player of the Year in 2013.

Schebler’s tremendous season at Double-A established himself as a legitimate prospect in the system. This is what I wrote about him last year.

“The athletic outfielder is a good power-speed combination prospect. He isn’t Joc Pederson in that department, but he’s not as far off as some would expect. At best in the majors, he’s a 20/20-type guy, but he’s probably more of a 15-18 home run/10-15 stolen base player. However, he has some improvements to make if he wants to reach that ceiling.

Schebler doesn’t draw a lot of walks. He entered this season with a 5.3 percent walk rate in 1,477 minor-league plate appearances. This season, he’s walking at a career-best 7.9 percent rate. If he could walk that “frequently” in the majors, he could be an everyday player. But with the power and the limited number of walks come strikeouts. Entering 2014, he had struck out in 23.1 percent of his plate appearances. That isn’t terrible, but with a lower-than-preferred walk rate, it stands out a little more. This season, he has improved by striking out 19.5 percent of the time.”

Everything about this remains true. Despite a drop in production at Triple-A, Schebler was still able to improve his walk rate by 0.2 percent and dropped his strikeout rate by 0.4 percent. He’s settling into the kind of hitter he’s going to be at the next level — corner outfielder with mid-to-high-.700s OPS with at least average speed, can take a walk every once in awhile and not strike out enough to cause much concern. He’ll probably hit at least .250 in the majors, but batting average doesn’t mean a whole lot anymore.

So far with the Dodgers, he has been excellent. Yes, it has been 10 games, but he’s already been worth half a win and his three home runs have been awfully impressive.

Gabe Kapler has taken quite a liking to Schebler. This is a great piece from Pedro Moura from June.

“Over Memorial Day weekend, new Dodgers director of player development Gabe Kapler visited the Triple-A Dodgers in Las Vegas. The two men met, and Kapler presented Schebler a pack of data, six or so metrics that showed he wasn’t so much struggling as he was getting unlucky. More than 30 percent of the balls he was putting into play were traveling 95 mph or faster, a number that should lead to more success, more power.

‘Honestly, you’re fine,’ Kapler told him that day. ‘You’re kind of right where we want you to be.’

Two weeks later, with his conventional statistics still subpar, the Dodgers called Schebler up to the majors for a day, to give him a taste of what he has coming. His first major-league hit was clocked at 105.6 mph. With a renewed sense of self-confidence, Schebler said his perspective had been permanently altered.”

And that hasn’t changed. It’s an extremely small sample size, but Schebler is hitting the ball extremely hard in his first 25 plate appearances. 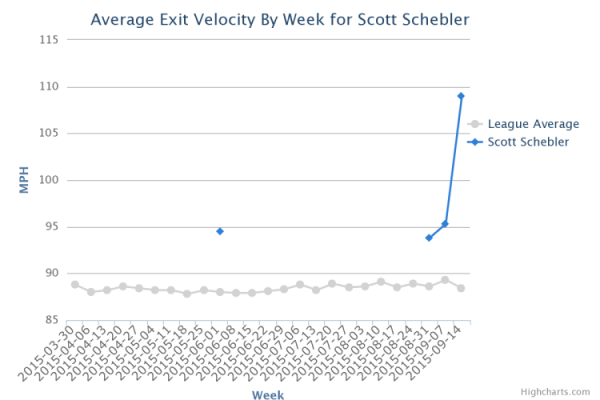 It’s skewed because of the 109 MPH home run he hit last night, but he has been well above-average the previous two weeks.

With Andre Ethier and Carl Crawford still around, Schebler won’t get a ton of playing time. But he’s doing nothing but improving his stock for next year — be it with the Dodgers or another team. He very well might force the Dodgers to trade Ethier or Crawford in the offseason. Seeing as the Dodger front office is aiming to bring payroll down to avoid playing the luxury tax every year, having a guy like Schebler who could possibly produce as well as Crawford for a fraction of the cost would be invaluable. And with Kapler’s affinity for Schebler, I’d be surprised if he were traded in the offseason.

Something something depth. Hooray depth!

Dustin Nosler began writing about the Dodgers in July 2009 at his blog, Feelin' Kinda Blue. He co-hosted a weekly podcast with Jared Massey called Dugout Blues. He was a contributor/editor at The Hardball Times and True Blue LA. He graduated from California State University, Sacramento, with his bachelor’s degree in journalism and a minor in digital media. While at CSUS, he worked for the student-run newspaper The State Hornet for three years, culminating with a 1-year term as editor-in-chief. He resides in Stockton, Calif.
@DustinNosler
Previous Dodgers 4, Rockies 1: Bad Kershaw Still Awful Good
Next Rockies @ Dodgers Sept. 15, 2015: Los Angeles Dodgers, lefty mashers