If you said to me (or anyone, really) in March that Mike Bolsinger would have been worth 1.2 wins for the 2015 season, I would have called you crazy. I also would have been ecstatic because no one — not even Daniel — expected Bolsinger to be this good.

So, what happened to Bolsinger? It’s quite the puzzle, and I’m going to try to solve it, or at least get most of the pieces in the right spots.

First, let’s not forget what a huge impact Bolsinger had on the Dodgers through July. If not for him, who knows what the starting rotation would have been like. I’m sure the front office would have done more to shore it up before the deadline, but seeing as the Dodgers targeted him as a contributor — and got said contribution — made his acquisiton quite the win.

After the Dodgers traded for Alex Wood and Mat Latos, Bolsinger was sent to Triple-A. Some didn’t like it, but it’s all a numbers game. He had options and the Dodgers wanted him to get used to working out of the bullpen. No one could have expected Latos to be as ineffective for the Dodgers as he was — so much so that he was designated for assignment in September, when the all teams have the luxury of having 40 players on the active roster. That is some kind of special.

Since Bolsinger’s return, he has been dreadful.

His rate stats were much better before his demotion (aside from his strikeout rate).

So, what happened? His curveball stopped being effective.

Bolsinger relied a lot on his curveball early on. He threw it nearly 36.5 percent of the time before his demotion. For context, Jose Quintana leads MLB in curveball percentage at 30.2, so Bolsinger’s 36.5 would easily best that, if he qualified. He threw it so much because it was a good pitch for him. He got whiffs on the pitch 9.7 percent of the time. Since he returned, though, he hasn’t thrown the pitch as frequently (29.5 percent) and while he has gotten roughly the same number of whiffs on it (9.4 percent), batters are squaring it up a lot more often.

This is his isolated power on his curveball this season. The problem should be pretty easy to spot. 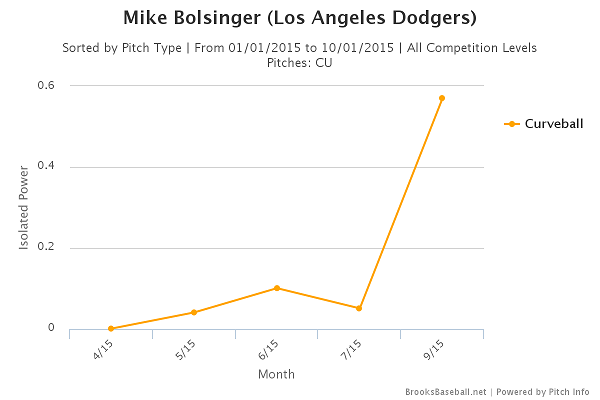 Yikes. He allowed a .068 ISO on his curveball through the end of July (league-average is .140). Since the beginning of September, that number skyrocketed to .567 — that isn’t a typo. And it isn’t just the ISO that is trending in the wrong direction — everything is. 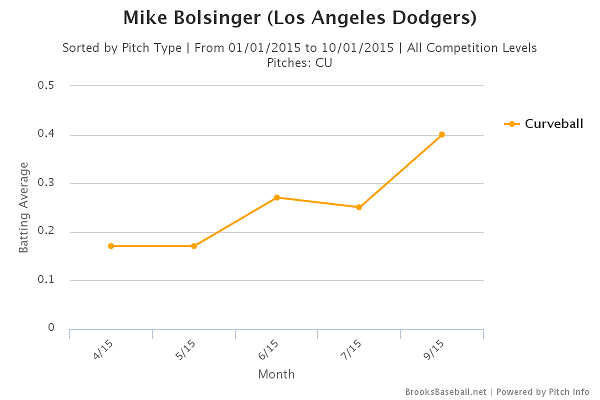 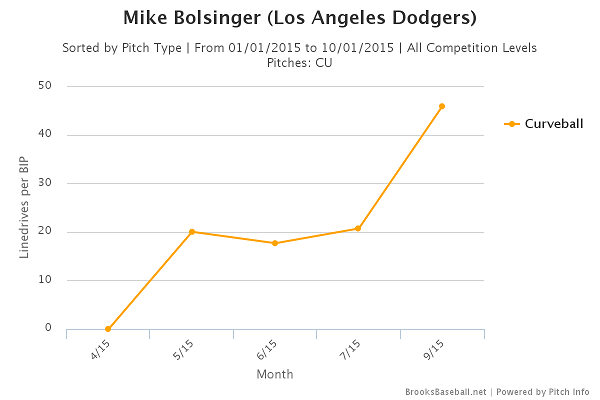 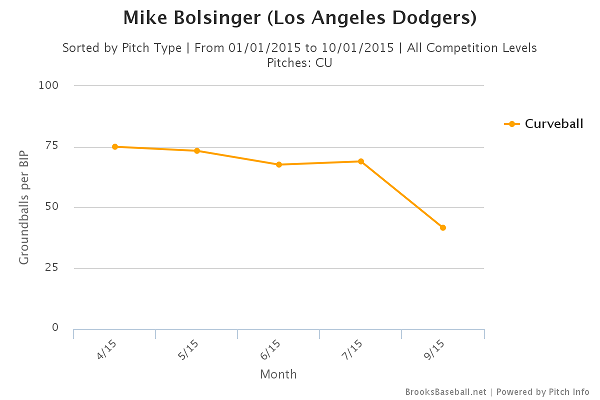 When you’re best pitch isn’t working and you don’t have plus-velocity or other pitches, you’re going to get hit really hard.

The only other thing in the data I saw that looked suspect is his velocity on the curveball. It is down by 1-2 MPH from earlier in the season. There’s not a definitive conclusion to be drawn from it, but it is something to at least consider when looking at what has gone wrong. His slider has actually been the most consistent pitch, velocity-wise. 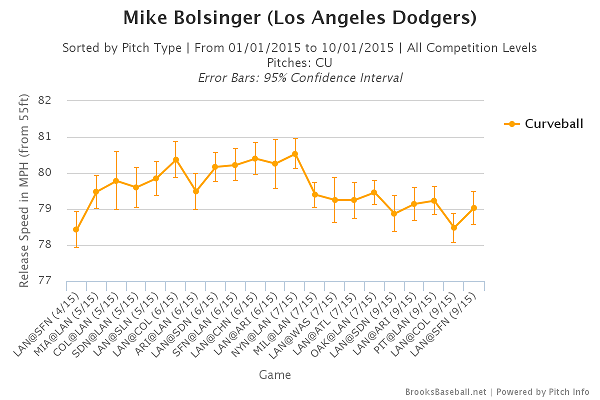 And just so you don’t think I’m discriminating against his curveball, his cutter hasn’t been good either. 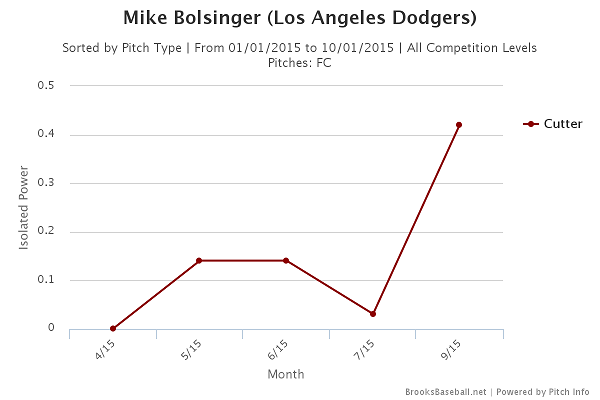 Sure, Bolsinger got hit around really hard in Coors Field on Sept. 25, but his struggles aren’t isolated to just that launching pad.

Workload could also be a reason for his struggles. He was at 135 2/3 innings between Triple-A and the majors before coming back up. Add in the 20 1/3 innings and that’s 154 on the season. His career-best to this rate had been 144 last year and 144 the year before that. The difference being, 109 1/3 of his 2015 innings came in the majors, which absolutely makes a difference when comparing the workload to Triple-A innings.

He once looked like a lock for the postseason roster (especially after Latos was DFA’d). Now, he’s a guy who isn’t effective enough to pitch in any kind of high-leverage situation. It’s a mechanical thing with his curveball and he’ll have all winter to work it out. Bolsinger should be a valuable piece of the pitching staff next season, especially considering the uncertain nature of it. Hell, he was a valuable piece this season, but the Dodgers have gotten about all they’re going to get out of him this season.

Dustin Nosler began writing about the Dodgers in July 2009 at his blog, Feelin' Kinda Blue. He co-hosted a weekly podcast with Jared Massey called Dugout Blues. He was a contributor/editor at The Hardball Times and True Blue LA. He graduated from California State University, Sacramento, with his bachelor’s degree in journalism and a minor in digital media. While at CSUS, he worked for the student-run newspaper The State Hornet for three years, culminating with a 1-year term as editor-in-chief. He resides in Stockton, Calif.
@DustinNosler
Previous Dodgers 3, Giants 2: Brett Anderson Gets Paid (More)
Next Padres @ Dodgers, Oct. 2, 2015: Oops