I was as surprised as you were when J.P. Howell exercised the player option in his deal for $6.25 million. After posting a 1.43 ERA in 2015 and 1.97 in his last three seasons (not to mention a respectable 3.14 FIP), many thought the 32-year-old lefty would try his luck on the open market. He didn’t, and the Dodgers could benefit from that.

Howell has been usually successful for a pitcher who tops out at in the upper-80s, and he has done so by having a curveball that is hard for hitters to square up.

When I was doing research for the fastball-slider lefty post earlier this week, I noticed Howell had a .000 isolated power against his curveball in 2015. I did a double-take and, sure enough, Howell did not allow an extra base hit off his curve in 2015. All 15 were singles — 11 were to right-handers and just four were to lefties. He also induced 27 and 19 swings-and-misses, respectively. For whatever reason, hitters have a hard time making good contact with the pitch. His exit velocity on curveballs put in play was 82.7 MPH (27 occurrences with the available data). It was the lowest exit velo of any of his pitches. The last time he gave up an extra base hit on curveball was on Sept. 26, 2014, when Ben Paulsen of the Rockies hit a home run in Dodger Stadium. Justin Ruggiano doubled on Aug. 3, 2014. Howell has given up two extra base hits in the last two seasons on his bender. 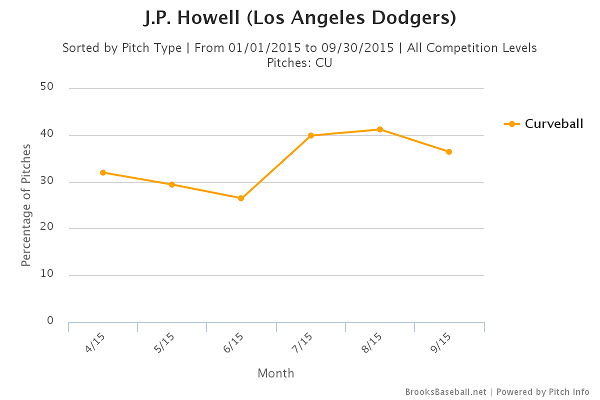 Howell threw his curveball as much as 41.1 percent in the month of August. I didn’t include October stats (regular- or postseason) because he faced one batter to end the regular season. Despite the heavy usage and seeming positive results, FanGraphs rated it just 2.8 runs above average. It was good for 17th-best in baseball among relievers (minimum of 40 innings pitched), but the numbers would almost dictate a higher value. Then again, pitch value ratings aren’t the be-all end-all, either. His best rating came in 2013 at 6.5, which was third-best in baseball.

I know some of us are nervous when Howell comes into a game (myself included). His stuff is far from overpowering and his command is far from spot-on. But with a weapon like his curveball, perhaps there isn’t as much reason to fret. That’s not to say he’s going to post a sub-2 ERA in 2016, but he’s a little better on the bump than most give him credit for.

Dustin Nosler began writing about the Dodgers in July 2009 at his blog, Feelin' Kinda Blue. He co-hosted a weekly podcast with Jared Massey called Dugout Blues. He was a contributor/editor at The Hardball Times and True Blue LA. He graduated from California State University, Sacramento, with his bachelor’s degree in journalism and a minor in digital media. While at CSUS, he worked for the student-run newspaper The State Hornet for three years, culminating with a 1-year term as editor-in-chief. He resides in Stockton, Calif.
@DustinNosler
Previous Get to know this year’s foreign imports: Jae-gyun Hwang
Next Yasiel Puig’s ‘scuffle’ at bar was misreported, but should still raise questions