I guess it’s time we talk about Johnny Cueto, seeing as the Dodgers are reportedly interested in his services. I don’t mean to sound so unenthused about it, but when you were expecting Zack Greinke or David Price, potentially getting Cueto is a bit of a letdown. Seeing as the trade market for starting pitchers is insane, Cueto might very well be the best option for the Dodgers, despite the risks involved.

That might be a bit harsh, seeing as Cueto has been one of the 20 best starting pitchers in baseball since 2012 and is coming off a masterful performance in Game 2 of the 2015 World Series. But he hasn’t been the picture of health in his career.

Twice in his eight seasons he has missed time due to various injuries, and had an elbow scare just last season. Despite that, he hasn’t seen his velocity dip much in his career. 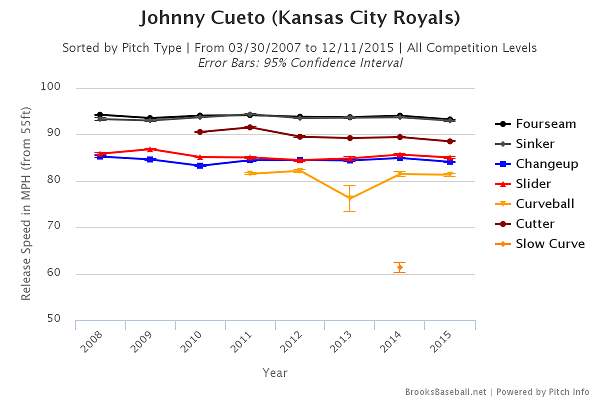 His fastball and sinker are his best pitches. Mike wrote a piece on MLB.com about the exit velocity on Cueto’s 4- and 2-seam fastballs.

Seeing as league-average exit velocity overall is in the 88-89 MPH range, having Cueto inducing weak contact with his best pitches only bodes well for his long-term prospects.

The Dodgers are in a tough position. While it’d obviously be better to acquire a guy like Jose Fernandez, Carlos Carrasco or Sonny Gray, the asking price for them is astronomical and/or they aren’t available at this time. Cueto doesn’t come with draft pick compensation, so there’s no need to worry about that. The biggest risk with him is in the long-term health of his elbow. In this market, he’s still going to land a $100 million-plus deal for 5-6 years. The Diamondbacks reportedly offered him a 6-year deal with $120-126 million. He turned that down and they allocated that for Greinke.While Cueto’s market seems a bit down, he’ll still get at least a 5-year deal from a team. I’d be OK with the Dodgers going 5/125 on him, but I’m not sure that’s enough to get it done, even with his market being a bit depressed.

Dustin Nosler began writing about the Dodgers in July 2009 at his blog, Feelin' Kinda Blue. He co-hosted a weekly podcast with Jared Massey called Dugout Blues. He was a contributor/editor at The Hardball Times and True Blue LA. He graduated from California State University, Sacramento, with his bachelor’s degree in journalism and a minor in digital media. While at CSUS, he worked for the student-run newspaper The State Hornet for three years, culminating with a 1-year term as editor-in-chief. He resides in Stockton, Calif.
@DustinNosler
Previous Well, That Was Disappointing, Temporarily
Next 2015 Positional Review: Second Base