Alex Wood making up for lack of strikeouts with grounders, soft contact

Alex Wood makes his return to Atlanta tonight for the first time since the Dodgers traded for him last July. While his 2015 with the Dodgers wasn’t memorable (mostly because he was pitching through an injured ankle), there are some indicators he’s trending upward.

He has made just two starts this season and was good for 1 1/2 of them. Things were going incredibly well in San Francisco in his first start until the fifth inning. He was much better all-around last time out against Arizona. Despite that, he still has an ugly, yet consistent, 4.50 ERA, 4.46 FIP and 4.51 xFIP.

Through his first two starts, Wood’s velocity is sitting at 91.5 MPH. He hasn’t averaged that since his rookie season when he split time between the rotation (11 starts) and the bullpen (20 appearances). In those 11 starts, he averaged 92 MPH on his fastball (classified as a sinker on Brooks Baseball). He also averaged just 5.1 innings per start, which helps to account for the higher velocity.

Unfortunately, his strikeouts have yet to return. He has just six strikeouts in 12 innings (11.8 percent). Even when he struggled last season, he still struck out 17.8 percent of the hitters he faced. The sample size isn’t enough to get worried about yet, but it’s something to watch going forward.

His curveball was working in his last start, as he got seven swinging strikes on the pitch (compared to just two against SF). It has been his best and most consistent swing-and-miss pitch in his career, as illustrated below. 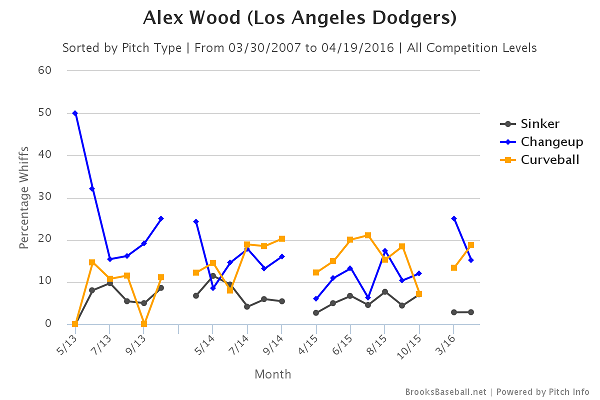 It’s also the third-best curveball in baseball so far, if you go by FanGraphs’ pitch value statistic.

Wood is making up for the lack of strikeouts by getting a lot of ground balls. He’s seventh in the majors with a 63.2 percent ground ball rate. He’s also getting some of the softest contact of any starter (35 percent).

I’m expecting the strikeouts to pick up (they almost have to by default). If they do, and Wood can maintain elite (or even above-average) levels of ground ball and soft contact rates, he might be in store for a strong season. With Scott Kazmir struggling so far, Wood being able to pick up the slack might be just what the Dodgers need until some of the other rotation pieces return.

It’s hard to make any definitive statements about players based on such little data, but things are looking positive for Wood. Turns out he’s actually a good pitcher, no matter what others might say.

Dustin Nosler began writing about the Dodgers in July 2009 at his blog, Feelin' Kinda Blue. He co-hosted a weekly podcast with Jared Massey called Dugout Blues. He was a contributor/editor at The Hardball Times and True Blue LA. He graduated from California State University, Sacramento, with his bachelor’s degree in journalism and a minor in digital media. While at CSUS, he worked for the student-run newspaper The State Hornet for three years, culminating with a 1-year term as editor-in-chief. He resides in Stockton, Calif.
@DustinNosler
Previous Podcast: ‘Dugout Blues’ episode 152 – Hernandez, Maeda, prospects
Next Dodgers @ Braves April 19, 2016: Not your father’s Braves