Like they did in Atlanta, the Dodgers are going for a series win in the rubber game against the Rockies on Sunday afternoon.

Alex Wood is on the hill after a rough outing against his former team last time out (4 IP, 7 H, 6/3 R/ER, 3 BB, 1 K). This outing won’t be any easier, seeing as he’s pitching where the air is thin. He has three career starts in Colorado and, as you might expect, they weren’t pretty: 11 IP, 21 H, 15 R/ER, 4 BB, 7 K. Here’s hoping he can give the Dodgers at least five innings of competitive ball. Odds are pretty good that Zach Lee will make his second MLB appearance today.

Justin Turner is out of the lineup for a second consecutive day with a bruised toe. He suffered it on Friday when Rockies’ catcher Tony Wolters stepped on Turner’s toe while throwing behind Corey Seager at first base.

The rest of the lineup is pretty status quo. Left field has been a bit of a revolving door, with it stopping today on Trayce Thompson. Howie Kendrick, who is on the All-Star ballot as an outfielder (and yes, All-Star balloting begins today, for whatever reason), steps in for Turner at third base.

Adrian Gonzalez is starting his 19th consecutive game and will get a day off (most likely) Monday against the Marlins. Yasmani Grandal is back in the lineup after a night off.

Kenta Maeda was really good last night — surprisingly good, even. He threw 6 1/3 scoreless innings in his first outing at Coors Field. He did so by throwing fewer sliders and curveballs.

Despite throwing the fewest number of sliders in any outing so far, he was still able to maintain great swinging strike rate. 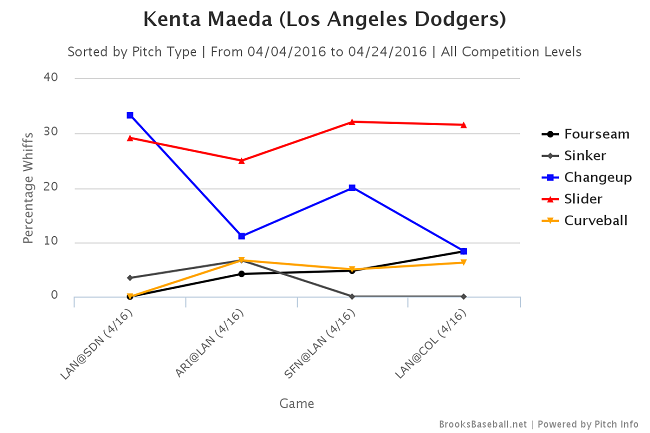 OK, with Carl Crawford and Louis Coleman coming back, two guys are going to Oklahoma City (unless there’s a phantom disabled list move coming). I’m guessing Lee and Thompson are the most likely candidates, with Charlie Culberson (who does have an option remaining) as a darkhorse.

Dustin Nosler began writing about the Dodgers in July 2009 at his blog, Feelin' Kinda Blue. He co-hosted a weekly podcast with Jared Massey called Dugout Blues. He was a contributor/editor at The Hardball Times and True Blue LA. He graduated from California State University, Sacramento, with his bachelor’s degree in journalism and a minor in digital media. While at CSUS, he worked for the student-run newspaper The State Hornet for three years, culminating with a 1-year term as editor-in-chief. He resides in Stockton, Calif.
@DustinNosler
Previous Dodgers 4, Rockies 1: Kenta Maeda dominates, lowers ERA to 0.36
Next Dodgers, 12, Rockies 10: Until August, Coors Field