Clayton Kershaw‘s start on Thursday morning was an odd one. That’s kind of weird to say seeing as he struck out 10 Braves’ hitters and walked just one over eight innings. That came with 10 scattered hits.

The numbers showed he probably should have given up more than he actually did, but he was able to hold Atlanta to just one run in his outings. He was able to do that by inducing 20 swinging strikes. That’s good! Here’s how that broke down.

For Kershaw, this was the best whiff rate on his fastball of the season at 16.1 percent. The flip side: He gave up six hits on his fastball. He allowed a 92.9 MPH exit velo on the nine fastballs the Braves put into play, and 93.5 MPH on the six hits (five singles and a double). Kershaw was second-best in the majors last season at limiting hitters to just an 85.3 MPH exit velocity.

The Braves made hard contact against Kershaw with the likes of Tyler Flowers, Jeff Francoeur, Freddie Freeman, Adonis Garcia Drew Stubbs and Erick Aybar, who hit the double. Not exactly the ’27 Yankees, I know. Despite that, his season exit velocity allowed is still 86.5 MPH — still much better than league-average.

His velocity was consistent throughout the afternoon. 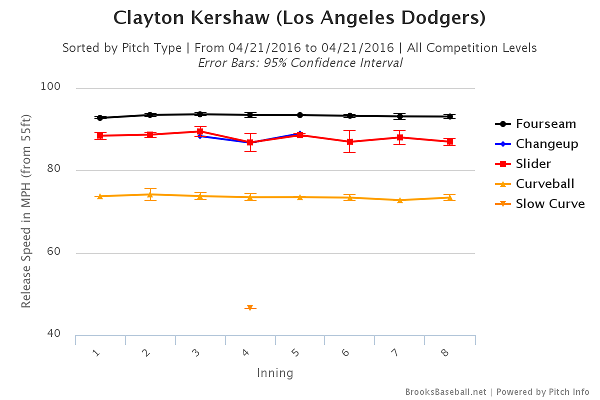 Seven of the 10 hits allowed came in the first innings. He had too many hittable pitches, perhaps prompted by an inconsistent horizontal release point. 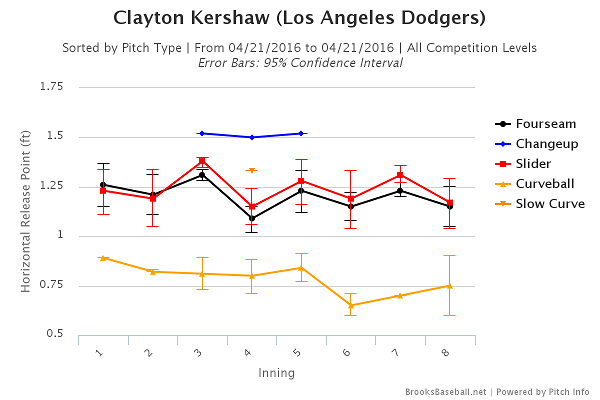 And for context, here’s his horizontal release point since 2010 (the data prior to that showed a dramatically different release point). 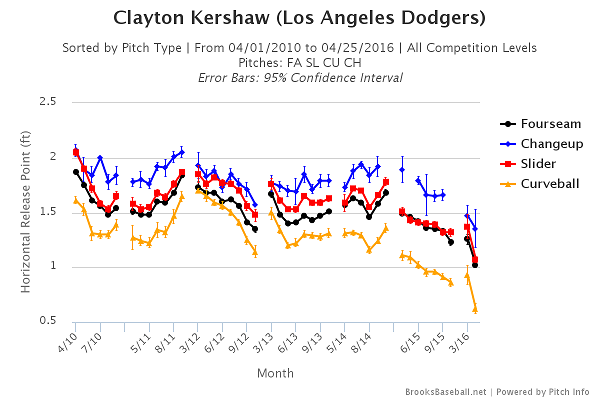 It’s early, but so far, he hasn’t found the release point he had in the previous six seasons (and he’s still pitching quite well … scary).

Kershaw has given up 10 or more hits in an outing just three other times in his career. The other times, he didn’t fare nearly as well as he did on Thursday.

This was his ninth career game. It was also a time when he had yet to develop a slider. He was predominantly a fastball-curveball pitcher, and he didn’t miss a ton of bats in this outing. He got one swinging strike on his fastball in the second inning and one on his curveball in the fourth — that was it. The threw his fastball 74.3 percent of the time, his curveball 24.3 percent and his changeup 1.4 percent. It was probably the worst outing of his career.

Another launching pad in the form of Chase Field, Kershaw sported a fastball thrown 59.6 percent of the time, a slider at 26.3 percent, a curveball at 10.1 percent and a changeup at 4 percent of the time. He got 10 swinging strikes overall: four on his fastball, five on his slider and one on his curveball.

These three outings were a lot worse overall than the one Kershaw had on Thursday. I’m not exactly sure how to explain it. He was incredibly effective and ineffective with his fastball against the Braves. These are things the best pitching in the world can get away with from time to time.

Dustin Nosler began writing about the Dodgers in July 2009 at his blog, Feelin' Kinda Blue. He co-hosted a weekly podcast with Jared Massey called Dugout Blues. He was a contributor/editor at The Hardball Times and True Blue LA. He graduated from California State University, Sacramento, with his bachelor’s degree in journalism and a minor in digital media. While at CSUS, he worked for the student-run newspaper The State Hornet for three years, culminating with a 1-year term as editor-in-chief. He resides in Stockton, Calif.
@DustinNosler
Previous Marlins 3, Dodgers 2: Dodgers drop the first game of a series again
Next Marlins @ Dodgers April 26, 2016: Welcome back, Carl Crawford