It isn’t a secret that I’m no fan of Pedro Baez. I really should be, as a lot of his peripheral numbers are good and trending in the right direction. Yet, I cannot get over the maddening inconsistency and constant poor pitches — especially in high-leverage situations.

Baez is allowing harder overall contact this season in terms of exit velocity. He was at 87.6 MPH last year. So far in 2016, he’s at 89.8 MPH. That could be directly related to his command in the strike zone.

Take last night for example. He came into the game to relieve Kenta Maeda with runners on first and second. He starts off Martin Prado with a fastball, because that’s what he throws. Prado is Top 50 when it comes to first-pitch swings (63.5 percent), so he was obviously looking for it. 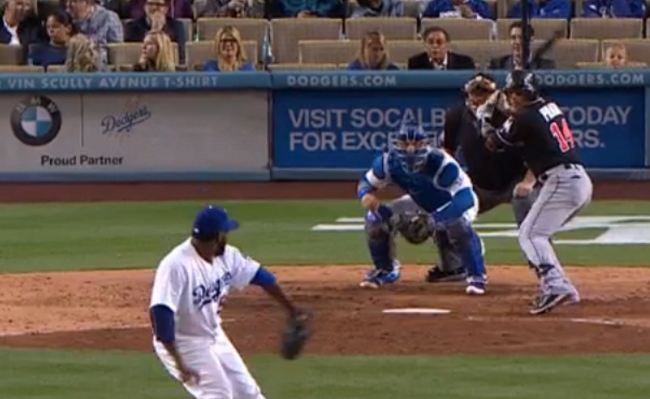 Yasmani Grandal is setting up in the middle of the plate, which is a bit questionable to begin with (especially if he’s throwing a fastball). 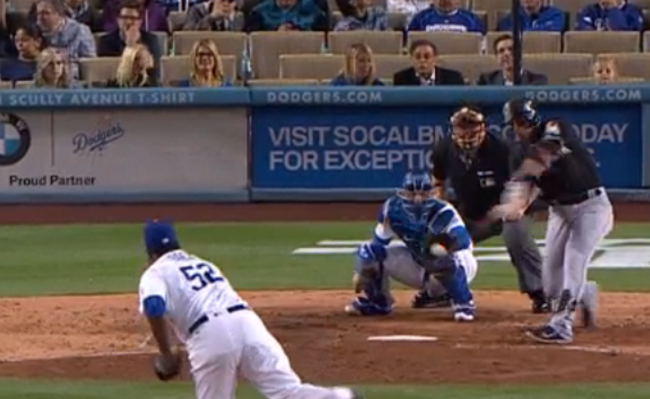 But the pitch tails over the inner-half of the plate. Sure, Prado didn’t make hard contact with the pitch, but the missed location is something that cannot happen, especially in a high-leverage situation.

In the next inning, Baez displayed poor command against Giancarlo Stanton. Grandal is trying to get Baez to throw a letter-high fastball on an 0-1 count — maybe not the smartest pitch in that count, but there are worse pitches to call/throw at that time. 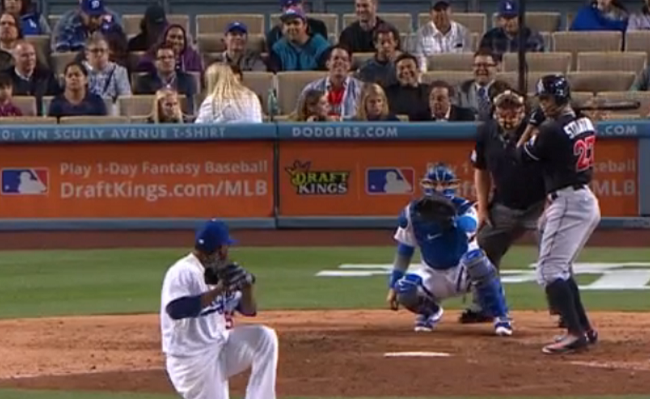 The result? A 93 MPH fastball belt-high, right down the middle. Stanton did exactly what you think he’d do with such a terrible pitch. 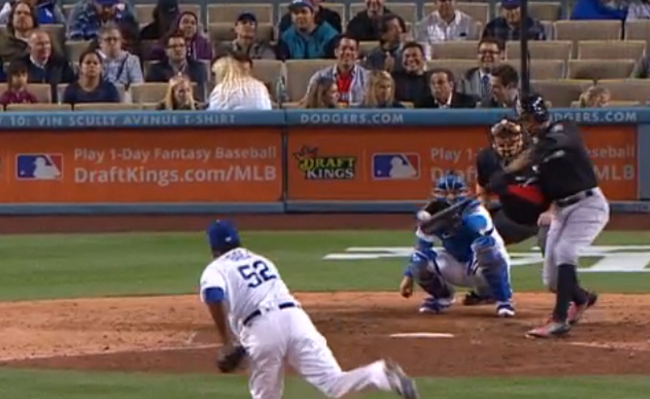 A third of the fly balls Baez has allowed this season have gone over the fence. That isn’t good. His reliance on the fastball has been apparent. He has thrown it almost 68 percent of the time and is getting a great 22.6 percent swinging strike rate on it. The bad part is, his off-speed stuff isn’t as effective — and he’s throwing it more. He has to learn how to use his other pitches sometime, but it might not be best for that to be in high-leverage situations.

Baez has allowed six of the eight runners he has inherited to score. Last season, he allowed just 15 of 40 to score. With Chris Hatcher struggling badly, Yimi Garcia hurting and Kenley Jansen‘s inability to pitch every inning out of the bullpen, Dave Roberts is almost backed into a corner in using Baez in these spots. Perhaps more Joe Blanton is something to consider — a sentence I thought I’d never write.

Until Baez learns to command his pitches in the strike zone, he won’t reach his late-inning reliever ceiling. He’s still young in terms of pitching experience, but it’s time for him to take a step forward. If he doesn’t, the Dodger bullpen could continue to be a question mark, even when it has good, productive stretches.

Dustin Nosler began writing about the Dodgers in July 2009 at his blog, Feelin' Kinda Blue. He co-hosted a weekly podcast with Jared Massey called Dugout Blues. He was a contributor/editor at The Hardball Times and True Blue LA. He graduated from California State University, Sacramento, with his bachelor’s degree in journalism and a minor in digital media. While at CSUS, he worked for the student-run newspaper The State Hornet for three years, culminating with a 1-year term as editor-in-chief. He resides in Stockton, Calif.
@DustinNosler
Previous Marlins 5, Dodgers 3: Swept
Next Padres @ Dodgers April 29, 2016: At Least the Marlins Are Gone