Dodgers Claim Casey Fien on Waivers, But Can He Help the Bullpen?

Between 2013 and 2015, Fien had a 3.9% walk rate. That was the fifth-best among relievers in that time period, just a shade behind Edward Mujica‘s league-leading 3.7%. Fien’s GB/FB ratio isn’t quite as extreme, the 21st lowest among 169 relievers in the same time-span. He induces about four grounders for every five fly balls, a ratio nearly halfway between Garcia and Baez’ career marks.

Then we get to the second part of the opening statement: Fien’s pitch usage. Fien’s repertoire avoids off-speed pitches even more than either Garcia or Baez: 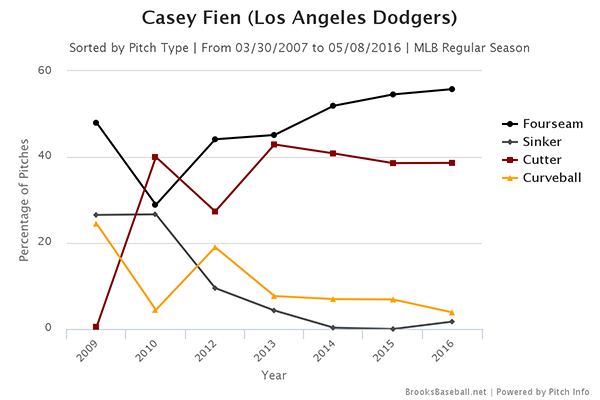 So, let’s actually look at Fien’s pitches. Here’s his four-seamer:

And here’s the cutter:

This is one reason why we actually watch the pitches instead of depending just on the pitch classifications. That cutter looks an awful lot like a slider. Fien can change the tilt and speed too, throwing the pitch anywhere between 86 and 91 with varying amounts of drop. To be fair to Brooks, classifying the difference between a cutter and a slider is extremely difficult (I have a post in my head about how Kenta Maeda‘s slider is a cutter and his cutter is a slider, but that will wait for another day). Fien calls it a cutter as well. Still, watching the pitch makes his usage look a lot more balanced than it otherwise would.

However, there’s still a problem: none of those pitches really look like strikeout stuff. Fien managed to strike out 30% of the batters he faced in 2013, but he hasn’t been over 20% since. As his strikeouts have dropped, he has still managed to be moderately successful due to good control of the strike zone and control of balls in play. Fien generates a lot of fly balls, but many of them don’t escape the infield and help lower the BABIPs he allows. He’s not Tyler Clippard in this regard, but it’s a good trait to have.

Unfortunately, this also gets us to the elephant in the room: Casey Fien was unwanted by the Twins. That’s an over-simplification, but it’s a particularly damning one. It’s also not difficult to see why: in 13-2/3 innings pitched this season, Fien has allowed a 7.90 ERA and a 6.73 FIP. Many of the things he controlled so well with the Twins have disappeared. Fien has allowed a .372 BABIP, and even worse, five home runs. In full relief seasons from 2013 to 2015, Fien has only allowed 9, 7, and 6 homers. A fly ball pitcher like Fien is going to live and die by his HR/FB ratio (much like Pedro Baez has). So far this year, Fien’s ratio is 22.7%.

In watching the five homers, the only one that seems cheap is this one by Carlos Correa:

Fien actually missed off the plate away, and Correa just flicked it the other way into the stands. Unbelievable. Fien allowed another homer in the same outing that scraped its way into the Crawford Boxes, but it was on a fastball down the middle so it’s hard to call it “bad luck.”

The underlying cause of Fien’s run of bad numbers is difficult to find without having watched him in-depth this year and previously. The only real smoking gun is his horizontal release point, which has shifted towards first base in the last season (the magnitude of which has taken him from about 3/4 of the way towards third to the center of the rubber). Batters are making less contact than before, but they’re also swinging at fewer balls and at more strikes so the overall contact quality might be better (Fien’s exit velocity allowed has ticked up slightly but not significantly). Mostly, Fien has just made bad mistakes to good hitters who have made him pay. He has a long career of limiting homers, so there’s at least some track record that suggests it could go back to normal. Of course, when Fien has to rely on home run suppression to be good, then he stops suppressing home runs, that should probably ring alarm bells, and that’s probably why the Twins let him go on waivers.

So, Casey Fien is not the cavalry, but you shouldn’t expect the cavalry on waivers. He has moments of being okay and moments of mediocrity. There is some upside, but it’s qualified upside. Perhaps that’s enough for this bullpen, and the fact that he still has an option remaining this year affords the Dodgers a little more flexibility with their roster construction. Ultimately, he’s depth. He does give us a chance to use this, though: